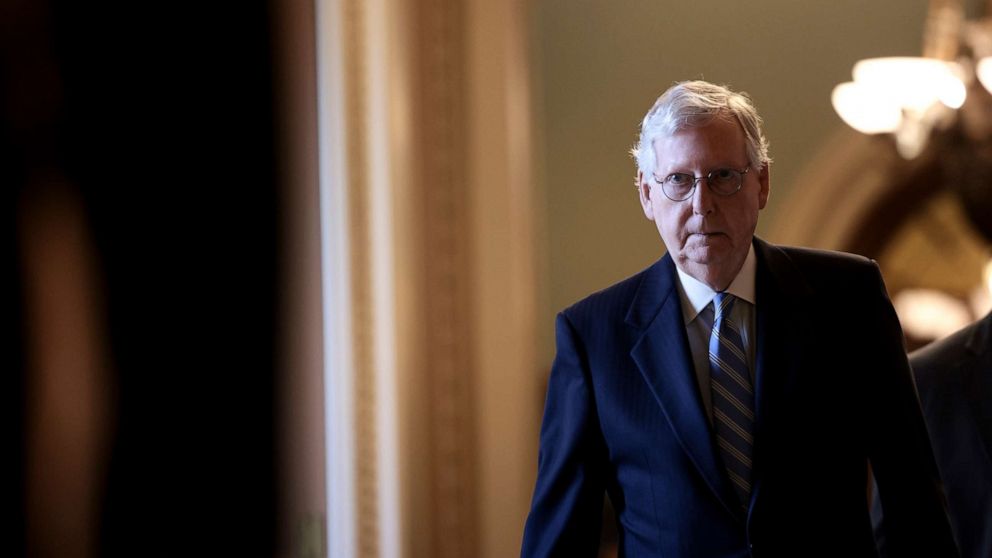 The disconnect between what’s being said about handling the debt ceiling and what’s likely to have to get done is as wide as ever — and it’s not for lack of honesty from congressional leaders about what they intend to do.

On Wednesday, barring a major surprise, Senate Republicans will block an effort by Democrats to suspend the debt ceiling through next December. Democrats will accuse them of hypocrisy and worse, with less than two weeks of borrowing left before the Treasury Department runs out of cash.

They’ll be right on the merits, up to and including the financial calamities that could come if the United States can’t pay its bills. But that won’t change the governing reality — even aside from the fact that talking points and even voting strategies on the subject have reliably flipped along with control of Washington.

Focus has been trained on Senate Minority Leader Mitch McConnell over his absolute refusal to go along with any efforts to authorize additional debt. McConnell, though, is representing the overwhelming, if not unanimous, view inside his conference.

Republicans see this moment as an opportunity to do what they can to stifle the Democrats’ agenda, and they are relying on the party in power to do the only responsible thing.

That may break norms, but it leaves Democrats with only one real option: using the budget “reconciliation” process to get around the GOP entirely, in what represents a tough political vote for many members.

It seems inevitable that Democrats will get there, unless or until attempts to shame Republicans into cooperation pay off or a few minds are changed among Democrats who say they won’t change filibuster rules.

President Joe Biden on Tuesday used a trip to Michigan to remind those watching of the “clear majority” he won last November to make the case for the balance of his domestic agenda.

That was a simple statement of fact. Yet the fact that Democrats enjoy majority status means something to both parties — and is still shaping the political rules.

The Biden administration is taking a confrontational tone with a GOP governor who has sought to undermine masking guidance in schools.

The Treasury Department has put Arizona Gov. Doug Ducey on notice, calling for the state to stop funding a grant program for schools that deliberately excludes schools with mask mandates from eligibility.

“Our COVID-19 Educational Recovery Benefit will empower parents to exercise their choice when it comes to their child’s education and COVID-19 mitigation strategies,” Ducey said of the grants in August.

A letter to Ducey from the Treasury Department describes the programs as an impermissible use of federal funds.

It’s an example of the administration making good on President Joe Biden’s previous promise to push back on GOP governors who aim to evade COVID-19 health guidance. If Arizona doesn’t address the issue in 30 days, the state could see federal funding revoked.

In a development unlikely to be on anyone’s campaign bingo card, Virginia gubernatorial candidate Terry McAuliffe is now microtargeting Taylor Swift’s loyal fan base of “Swifties” in a five-figure digital ad buy against his Republican opponent, Glenn Youngkin.

Why? Youngkin was co-CEO of the Carlyle Group during Taylor Swift’s public showdown with top music executive Scooter Braun in 2019 over him gaining the rights to the master recordings for her first six albums. The private equity firm had backed Braun’s deal that led to the acquisition.

Swift called on Carlyle to help at the time, and according to reporting from the New York Times, the firm brought the parties toward a resolution. McAuliffe has his own affiliation with Carlyle but was only a “passive investor” in 2019, and those investments didn’t pertain to this deal, his spokesperson Renzo Oliveri said.

The ads, which are part of a larger online get out the vote effort, will reach a “universe of persuadable voters who like Taylor Swift content and engage with her content.”

Youngkin campaign spokesperson Christian Martinez called it “pathetic.” The GOP nominee’s campaign has been targeting what’s likely a much bigger base of voters in the commonwealth — parents — after McAuliffe said in last week’s debate he doesn’t “think parents should be telling schools what they should teach.” The Youngkin campaign is running a TV ad, with a six-figure backing, highlighting that line statewide and has launched a mobilization effort to contrast him with McAuliffe on this issue.