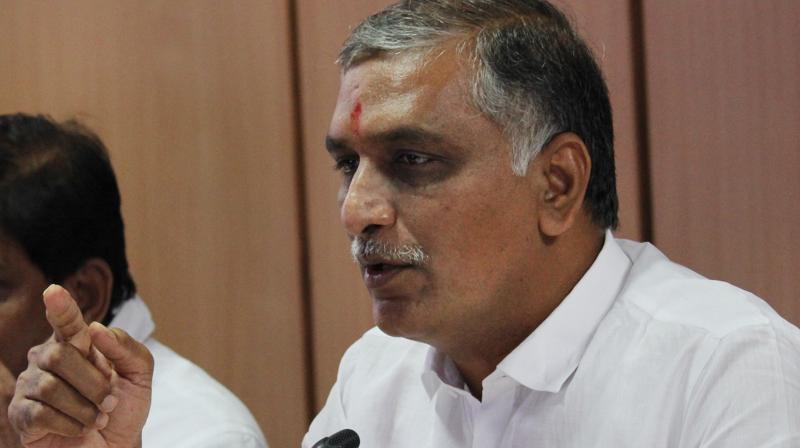 Huzurabad: He may not be the most powerful leader in the ruling Telangana Rashtra Samiti (TRS), but T. Harish Rao, the state finance minister, is undoubtedly the most popular after party supremo and Chief Minister K. Chandrasekhar Rao, having an emotional connect with the party cadre as well as the electorate in the state.

And, particularly when it comes to dealing with tough situations, just like the ongoing high intense political battle in the Huzurabad bypoll, Harish Rao becomes the natural choice to lead the party. He too is ready to accept the responsibility unmindful of the potential threat of being labelled as a failure in the event of party’s defeat as happened in the Dubbak bypoll.

Yet, he is ready with an answer, sporting his brand disarming smile, that he, as a disciplined soldier, would shoulder any responsibility bestowed on him by the party chief. Though the real winner of the battle will be known only on November 2, Harish Rao succeeded in neutralising the sympathy factor initially swayed in favour of his friend-turned-bitter critic Etala Rajendar, the Bharatiya Janata Party (BJP) candidate in the fray. Amidst hectic schedule and hopping between venues of a series of meetings organised to muster support to party candidate G. Srinivas Yadav, Harish shared his views with this newspaper on issues concerning not just Huzurabad but the state as a whole. Excerpts of an interview.

Q: Why is a bypoll forced on Huzurabad? Who is responsible – the Chief Minister or Rajendar?

Other than the natural reason of death of an incumbent MLA, we usually come across bypolls when the elected representative quits for a cause. People saw how the TRS used bypolls since 2001 as a weapon during the struggle for separate statehood. Now, Etala Rajendar owes an explanation why he had quit the Assembly and forced a bypoll.

Q: He says he is victimised by the Chief Minister.

A: It is far from the truth. He is just playing the victim card. It is his greed that led to the present developments. In fact, we succeeded in making people think and ask why he quit. It is purely on selfish grounds. It is everybody’s knowledge that there is no public cause involved.

A: Polls are held on party basis and after all, people cast votes on symbols. So, we are telling people to differentiate between the seven-year rule of K. Chandrashekar Rao in the state and the Narendra Modi-led government at the Centre. We delivered on our promises of making the state self-reliant and power surplus. We provided irrigation facilities so effectively that the state has become the new rice bowl of the country. We have been promptly extending Rythu Bandhu financial assistance to farmers.

On the contrary, the BJP’s rule resulted in high inflation, skyrocketing of oil prices and cooking gas, and sale of assets. It is going ahead with the draconian farm laws despite wide protests across the country. It made metering of agricultural connections mandatory and AP is implementing it but Chandrashekar Rao said he would not allow metering till his last breath. Rajendar also miserably failed to develop the constituency at least after 2014. He ranks last in the list of ministers who made use of the double bedroom scheme.

Q: Has anyone got funds other than the trio (of the Chief Minister, IT and industries minister K.T. Rama Rao and Harish Rao himself) for the housing scheme?

A: Why not? Pocharam Srinivasa Reddy (Speaker) completed his quota of 4,000 houses and took sanction for another 1,000. Srinivas Goud did well and Tummala Nageswara Rao, though defeated, successfully implemented the scheme. Rajendar neglected his home turf.

Q: ‘Bandhu’ turned out to be the buzzword, thanks to the Chief Minister’s grandiose announcement of Rs 10 lakh assistance to every Dalit family just on the eve of Huzurabad bypoll.

A: No, we have clearly indicated in the budget itself about a special financial package for Dalits. It has nothing to do with the bypolls.

Q: People are skeptical about implementation of ‘Dalit Bandhu’ and say they will have to wait for the bypoll outcome. There are demands from other communities for similar help. Will it be a game changer or end up as a show spoiler for the TRS?

A: We implemented all poll promises like enhancing pension from Rs 200 to Rs 2000, waiver of farm loans, financial assistance to brides, farmers and other needy. ‘Dalit Bandhu’ is a doable programme. Once we cover all Dalits, we will focus on other poorer sections.

Q: The Chief Minister’s recent announcement of Rs 20,000 crore for ‘Dalit Bandhu’ clearly indicates that implementation of the programme is on saturation mode and is going to be a long-term affair.

A: We will try to expedite but we are committed to implement and we will implement. The successful completion of Rs 1 lakh crore plus Kaleshwaram irrigation project stands testimony for our commitment.

Q: How is the state’s economy recovering post Covid?

It’s near normal and the economy has improved in the last few months. We hope to be in growth mode very soon given the indications of lesser chances of a third wave. It looks so funny that all the Central agencies including Niti Ayog and several ministries speak high of Telangana and its economic progress and their state leaders make false allegations.

Q: Finally, who will win Huzurabad?

The TRS, with a comfortable margin.