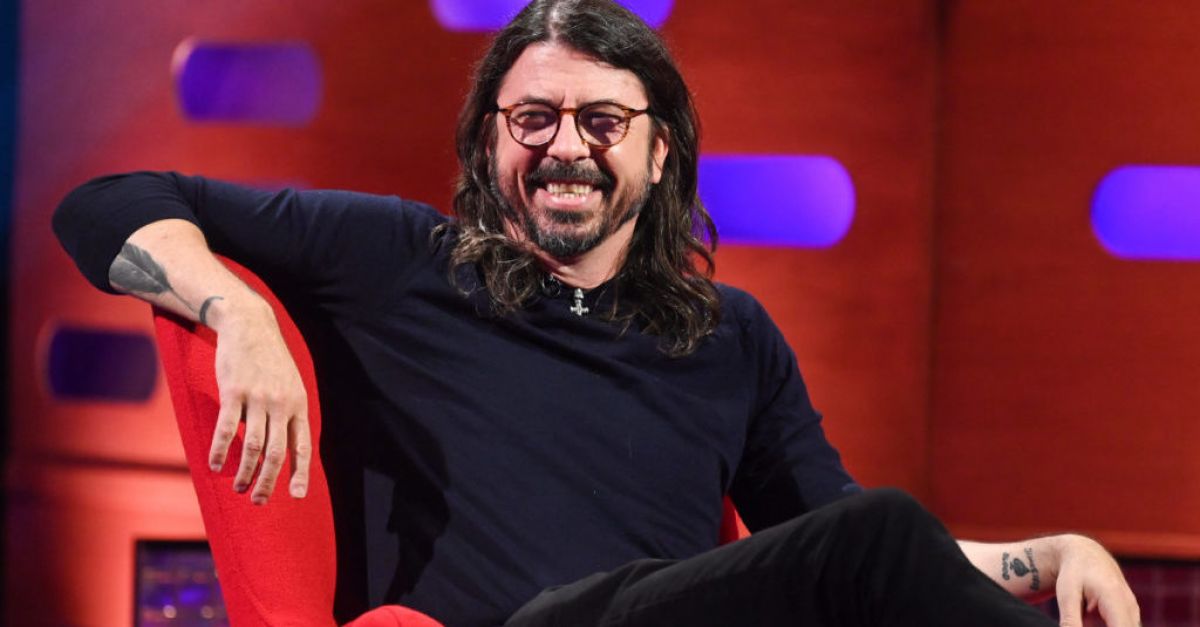 During his live concerts, Dave Grohl keeps a clock timer to the side of the stage. This is not, so he can count down the minutes until the end of his set. Quite the opposite, in fact.

The clock is there to stop him from playing one, two, even three hours over his allotted time.

This entertaining titbit of information is just one of many contained in the newly published memoirs of the veteran rock and roller, titled The Storyteller.

He calls me the morning after debuting his accompanying self-written one-man show at the glittering Savoy theatre in London.

“I had shaped and formed and written it just a few days before and wanted to keep it really loose,” he says in his instantly recognisable, chesty growl. “Because that’s what I do.”

The event sees Grohl deliver a series of vignettes from the book. He charts his childhood in Washington DC, his rise to fame as the drummer in Nirvana, the tragic death of singer Kurt Cobain and his own continuing success with stadium rockers Foo Fighters.

At one point, he even wheels out a drum kit and clatters away to a recording of Smells Like Teen Spirit.

“I was afraid that I wasn’t going to say enough – and I feel like I said too much,” he adds with a booming laugh.

Unsurprisingly, Grohl’s show ran over time, despite the presence of his trusty stage-side clock.

The 52-year-old is releasing his memoir as Nevermind, the beloved second album by grunge pioneers Nirvana, turns 30.

But The Storyteller focuses less on narrative sweep and more on individual moments that, through his charming, enthusiastic delivery, tell a bigger picture.

The idea for the book emerged from an Instagram account — Dave’s True Stories — that he started during the pandemic. “My mother was always very supportive and encouraged me to follow my own path,” he tells me of his youth in Washington DC.

“My father was a conservative Republican speech-writer, so I don’t know that he understood a child like mine’s mind.

“My mother is a public school teacher, I think she understood how kids learn, how kids grow, the idea of independence and identity intersecting and becoming yourself.

“These are things that my mother understood. My father, not so much.

His father was also a classically trained flautist, who gave up the instrument when he was unable to practise for the requisite four hours a day.

Grohl’s own approach to music was by measures more DIY. “To me, that doesn’t register in my mind,” he says.

“So when I felt it was time to move on with life, and travel the world playing music, he did not approve. But that was OK with me. It was fine. I didn’t really need his approval to do it.”

The Storyteller hurtles through Grohl’s time in cult hardcore band Scream before delving into Nirvana’s stratospheric rise to international fame.

“Nobody paid attention to us,” he recalls of his four years beside frontman Cobain and bassist Krist Novoselic.

“Bless all the people at the labels. We love them. They’re great. But nobody had the foresight to imagine we would become a hugely popular band.

“We really were just three young guys in a van, who had written some songs and booked about 12 days at a rundown studio in the San Fernando Valley to record – Sound City.

Dave Grohl drumming along to Smells Like Teen Spirit the other day in NYC 🤘🏻😎 #Nirvana pic.twitter.com/W6eXQzMy9g

“Nobody from the label came to the studio where we were recording. Nobody was paying attention while we were making the record.

“The original pressing, I think it sold 6,000 copies in its first week or something like that. But when the video hit MTV, that’s when everything started to explode. I think the people had faith.

“Of course, Kurt was writing these amazing songs, and they had heard the demos – they knew what type of band we were. So I think they just left us alone to do what we do, with Butch Vig producing. And everyone is really surprised with the result.”

With success came financial stability, something that had been absent in Grohl’s life since he left home as a teenager with Scream.

Grohl writes eloquently about the death of Cobain, who killed himself in 1994, the subsequent dissolution of Nirvana and the period of soul searching that followed.

The book will do nothing to dispel his reputation as the nicest guy in rock, but it does add nuance.

“I am a generally happy, positive, hopeful person,” he explains. “I try to be at least. I can understand the catharsis or release in those chaotic moments. It was one of the things that attracted me and the other guys in the band, to punk rock.

“It was really all about that release of energy that was real and raw and powerful and pure.

“But yes, there were times where smashing a guitar or jumping into the drum set could be a celebration, or it could be a sign of crisis. And just a matter of intuition, gauging which was which.”

As a father to three daughters, he has his own fears about the challenges faced by young musicians coming up today.

“Let’s put it this way,” he says. “Whenever I see a young artist becoming famous overnight, my initial reaction is concern, because it’s a really difficult path to navigate.

“You have to have your feet on the ground when that happens, because otherwise, it’ll just run you over.

“We were certainly not equipped or capable of just skating through that experience, it was going to come with a lot of challenges. And it did.”

The Storyteller is full of dramatic highs and painful lows. But it also includes tales of hilarity.

In the early days of Nirvana, Grohl moved into Cobain’s filthy Seattle apartment and slept next to a stinking tank containing the singer’s pet turtle, which every night would bang its head against the glass.

“Listen, I love turtles,” he says. “I love all animals. But I will never live with one ever again. Absolutely not.”

The Storyteller: Tales of Life and Music by Dave Grohl, is out now