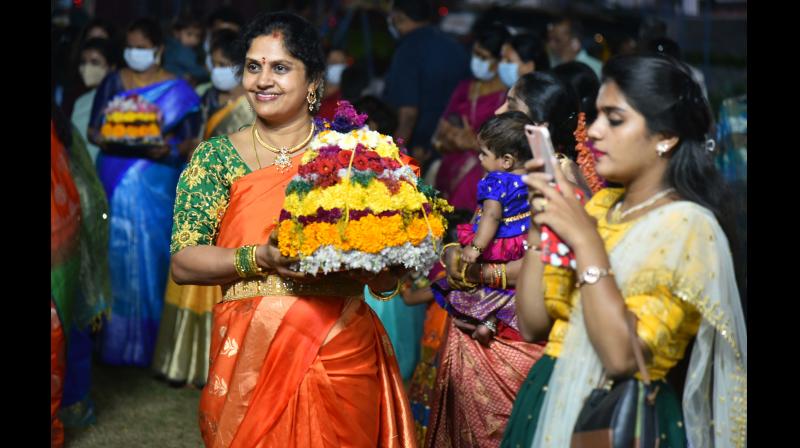 Hyderabad: The Greater Hyderabad Municipal Corporation (GHMC) made elaborate arrangements for Saddula Bathukamma celebrations on Thursday, where 10,000 women are expected to carry bedecked deities on their heads in a procession up to Hussainsagar for immersion. The festival focuses on promotion, enhancement and amalgamation of elements like women, flowers, nature, water and girl children which would promote the well-being of people in villages and towns. The corporation set up 26 baby ponds to facilitate Bathukamma on Thursday and Durga idols later.

The GHMC installed about 600 hoardings at all major junctions, bus shelters, foot over bridges and arches in this regard. The corporation already decked up all major junctions in the city with Bathukammas. As a part of special arrangements, the GHMC formed 12 Bathukamma Action Teams (BATs) which include about 95 sanitary field assistants (SFAs) and about 1,100 sanitation workers. About 3,500 women from the GHMC would be part of the event. It arranged as many as 28,916 temporary street lights at a cost of about Rs 190.34 lakh.

The civic body spent about Rs 2 crore to repair roads and make other arrangements at all Bathukamma ghats. It also installed temporary public toilets for men and women separately in the GHMC limits.  Besides this, the GHMC made a special 500-metre fresh water tank at Bathukamma Ghat near Tank Bund to avoid stench and contaminating Hussainsagar lake. It also set up about 160 Bathukammas at all important junctions in the city. Excluding Tank Bund, the GHMC made exceptional arrangements at Saroornagar Tank, IDL Tank, Hasmathpet Tank, Pragathi Nagar Tank, Sunnam Cheruvu, Gangaram Cheruvu, Durgam Cheruvu, Palle Cheruvu and Pedda Cheruvu. In a colourful celebration, a large number of crackers will be burst for 25 minutes at Durgam Cheruvu, Safilguda Mini Tank Bund and Saroornagar Lake.

Hyderabad city police commissioner Anjani Kumar appealed to the men to stay away from Bathukamma ghats during the celebrations. Since it is a festival of women, only women will be allowed at the ghats on Saddula Bathukamma day, he said, adding that about 4,000 police personal would be deployed and CCTV cameras would be installed at every Bathukamma Ghat to avoid sporadic incidents in the city, he added.

The festival would be conducted on a grander scale than last year by illuminating all important places and traffic junctions with 3D lighting to suit the occasion. Basic amenities like drinking water, vehicle parking and traffic management would be provided by the respective departments and wings.