Dustin Johnson may have a long Ryder Cup career ahead of him as a player, but the two-time major champion has already set his sights on a future role as Team USA captain.

The world No 2 was the oldest player in Steve Stricker’s side for their record-breaking 19-9 victory at Whistling Straits last month, where he became the first American player to win all five of his matches since Lanny Wadkins in 1979.

Johnson has featured in five of the last six Ryder Cup teams since making his debut in the biennial contest in 2010, including the last two American victories, and has also appeared in four of the last five winning Presidents Cup teams.

The 37-year-old would be expected to feature the 2023 side in Rome, where Team USA will be looking for their first win on European soil in 30 years, with Johnson open to the idea of a captaincy role once his playing days are over.

“Yeah, I would love to do it one day,” Johnson said when asked about the Ryder Cup captaincy role. “I think it would be fun. I think I would be a good captain. Yeah, it’s something that I definitely would like to do at some point. 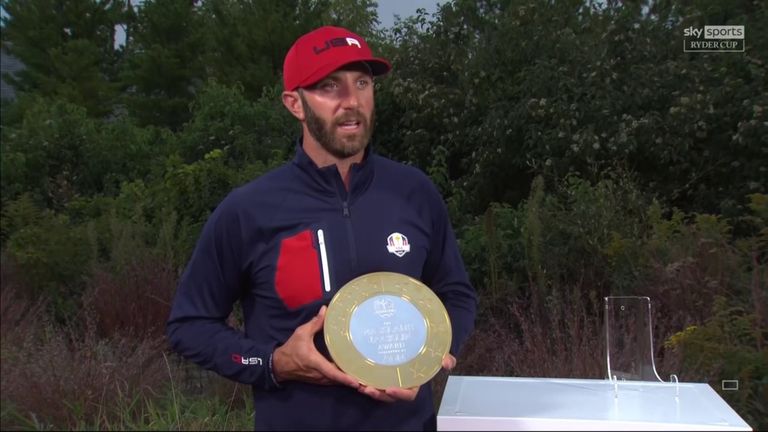 Dustin Johnson reflects on being named as the American recipient of the Nicklaus-Jacklin Award Presented By Aon, given to the player who best displays the spirit of the event

“I feel like I would let the guys just do their thing. I think that’s most important. The players are very good, I don’t need to tell them how to play a golf course or tell them what to do, but just put them in the situation where they can succeed.

“I feel like I’ve got a good relationship with most of the players out here, and hopefully I’ll be out here long enough to where I’ll know the guys that are going to be on the team.”

Johnson followed a FedExCup-winning season in 2019-20 by winning the Masters last November but hasn’t won on the PGA Tour since, with his only victory of 2021 coming on the European Tour at the Saudi International.

“Obviously got off to a good start last fall but, you know, didn’t play quite as well as I would have liked to during the year, but felt like I started to play a little bit better towards the end of the season.

“Obviously had a really nice Ryder Cup and hopefully can just build off of that a little bit. The game’s starting to turn around. Took the last couple weeks off, so trying to get back into the swing of things here this week.

“Felt like especially the last 18 months, played a lot of golf tournaments and with not really a lot of breaks. I’m going to play this week and then, you know, hopefully I’m going to have a nice little break here for the rest of the year.”

Watch The CJ Cup throughout the week live on Sky Sports. Live coverage begins on Thursday with Featured Groups from 3.15pm via the red button, ahead of full coverage from 10pm on Sky Sports Golf.