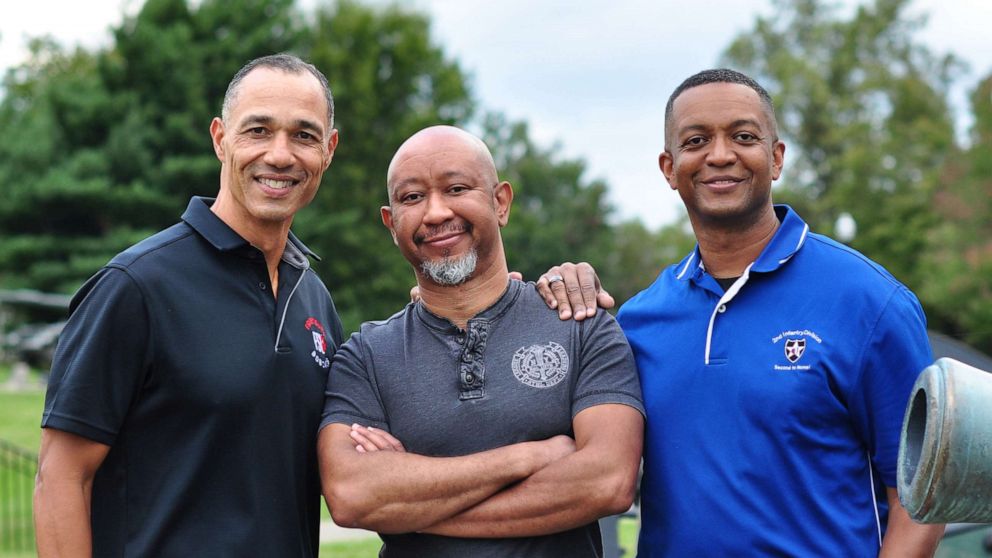 Three brothers were reunited this weekend at Fort Knox, Kentucky, bringing together two families inextricably tied to the U.S. Army.

Raised in an Army household, Brian Jackson 53, and his younger brother Eric, 50, always knew that they had an older brother who had been given up for adoption when their father served a tour of duty in Germany, but they knew no other details. Their father didn’t have much information either, as it wasn’t until he went on another tour to Germany that he learned a past girlfriend had given birth and given their son up for adoption.

Growing up as an only child, Robert Edmonson II, 54, always knew he had been adopted in Germany. As an adult, he learned that his biological father’s name was Edward Jackson and he was from Texas — but that’s all he knew.

This Saturday, now-Maj. Gen. Edmonson was reunited with his younger half-brothers, Brian and Army Col. Eric Jackson, at Fort Knox, Kentucky, the base where Eric Jackson is currently serving.

“A number of emotions came to mind,” Edmonson told ABC News. “I was raised as an only child, so I immediately had siblings.”

“I am still learning what that means,” he said. “I’m learning more about the emotions associated with with having siblings.”

Edmonson, who said he has no regrets about the way he was raised, lost his adoptive parents in recent years and reached out to family members to ask if he should contact his biological family. Everyone, he said, was extremely supportive.

“I had a terrific upbringing raised by an Army family, served for 20 years, provided for me as best they could, and I wouldn’t change a thing,” Edmonson said. Still, he said, “I knew that it was time for me to reach out,” to his brothers.

Once together, the brothers found there many amazing coincidences and parallels in their similar upbringings.

Both had served as young captains in the 82nd Airborne Division. They were in the same national fraternity, and their wives were nurses who belonged to the same national sorority. Plus, both of their oldest sons shared the same birthday.

Eric Jackson said he knew during his first phone conversation with Edmonson that Edmonson — who is currently the commanding general of the United States Army Communications-Electronics Command and Aberdeen Proving Ground in Maryland — outranked him.

Eric Jackson said he did it “out of respect for the rank that he wears. And also, it’s out of respect because I’m still the baby brother. My position has not changed. Robert’s has, but mine has not.”

“When I first met Robert, the first thing I can see is his mannerisms, his smile, his eyes,” said Brian Jackson. “They all reminded me of my dad.”

He joked that he had respectfully transferred “all big brother duties” to “a new big brother.”

He said their meeting was emotional and “really hard to put into words.”

“But if I could sum it up in one word, that one word could be ‘love.’ And if I was to put a banner on it, it would be ‘brotherly love,'” he said.

Edward Jackson passed away in 2007, never knowing that one day his three sons would reunite.

“He would be crying tears,” his widow, Barbara Jackson, told ABC News. “Cry and cry and cry, and he would be so happy.”

Eric Jackson said his father, who was known as a fun-loving dancer, is likely “dancing in heaven right now and excited that that we’re connected and that we finally found each other.”