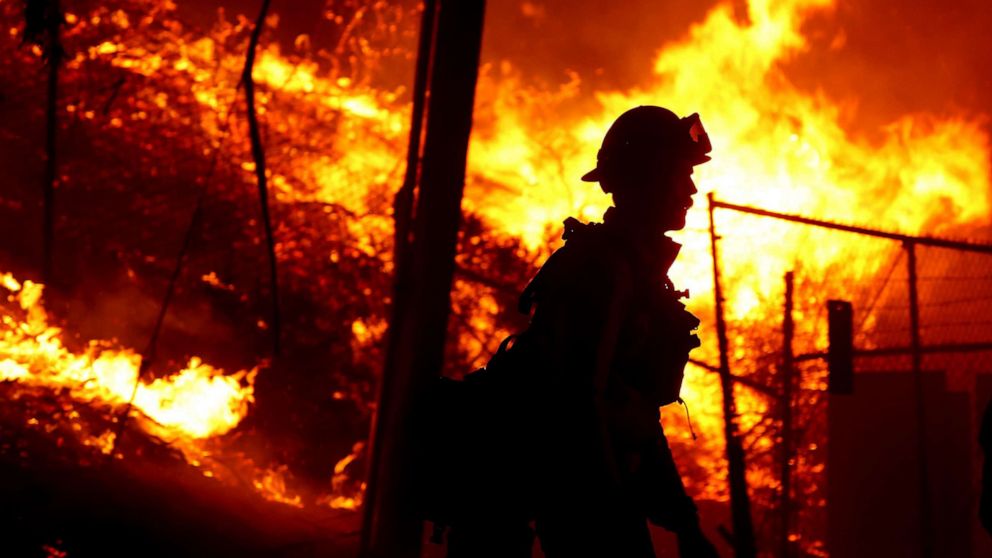 Firefighters in Southern California are struggling to contain fast-moving wildfires as strong and transitioning winds make it difficult to fight blazes from the sky.

The Alisal Fire in Southern California had exploded to about 15,442 acres by Wednesday afternoon after sparking near the Alisal Reservoir on Monday around 2:30 p.m. It remains just 5% contained and gusts up to 70 mph were recorded in the region, according to the National Weather Service.

Firefighters were not able to use air tankers or helicopters due to the high winds, Los Padres Forest Fire Chief Jimmy Harris told reporters Wednesday.

Fire officials expect “seesawing” from transitioning winds over the next week days, which will also add to the challenge to contain the fires, Harris said.

After it sparked, strong northwest winds pushed the fire south of the summit, crossing Highway 101 to Tajiguas Beach, according to fire officials. It took the fire just three hours to travel about 15 miles from Camino Cielo to Tajiguas Beach, Harris said.

The origin of the blaze is not yet known. A fire weather watch remains in Los Angeles and Ventura Counties through Friday.

The fire prompted evacuations in Santa Barbara County and the closure of Highway 101 from Las Cruces to Goleta. Closures of the 101, the only major highway in the region, have caused congestion on the nearby State Road 154 and Interstate 5, according to the California Highway Patrol.

While winds died down Tuesday, red flag warnings remained in effect in Northern California, where wildfires have destroyed dozens of trailers at mobile home parks in Sacramento County and San Joaquin County.

Pacific Gas & Electric de-energized power lines to about 24,000 customers in anticipation of a wind event, The Associated Press reported.

The region remains a tinderbox following decades of drought, exacerbated by climate change.