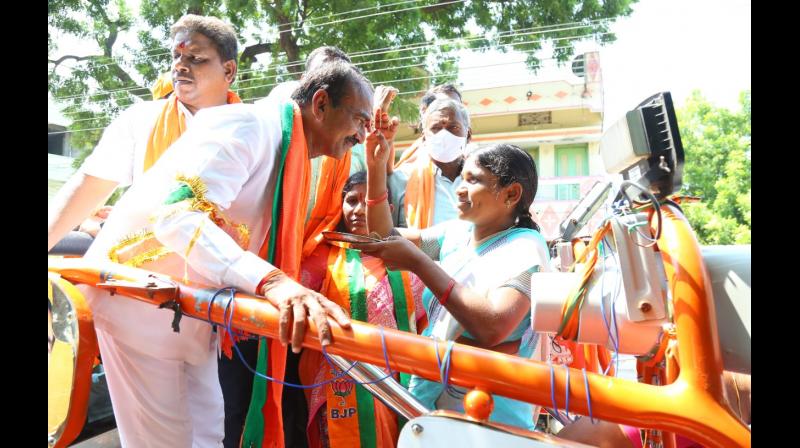 Karimnagar: Former minister Etala Rajendar on Tuesday said that womenfolk of Jammikunta had asked him to lead a kavathu (parade) with them to teach the TRS a lesson for “disrespecting” the people of Huzurabad constituency.

Rajendar said, "I told them that people will win the Huzurabad byelection in the manner dharmam (justice) won in the Kurukshetra battle.” At that time, he said, the kavathu would be held to show the power of women.

Rajendar alleged that Chief Minister K. Chandrashekar Rao was making plans to “finish” the careers of political leaders while sitting in Pragathi Bhavan, and minister T. Harish Rao was executing the plan while sitting in Singapur in Huzurabad.

“The leaders who are with me today are disappearing tomorrow. They were elected municipal chairman and councillors wth the support of the people. Did they win without my support? But now no one is there with me,” Rajendar said adding “I am happy because the people are with me. Who is with the leaders who joined the TRS.”

Rajendar alleged that the TRS leaders were ready to distribute not only money but also mutton for Dasara to the people. “They are ready to give Rs 50,000 per vote. Take that money which belongs to the people but vote for justice and self respect,” he Rajendar said.