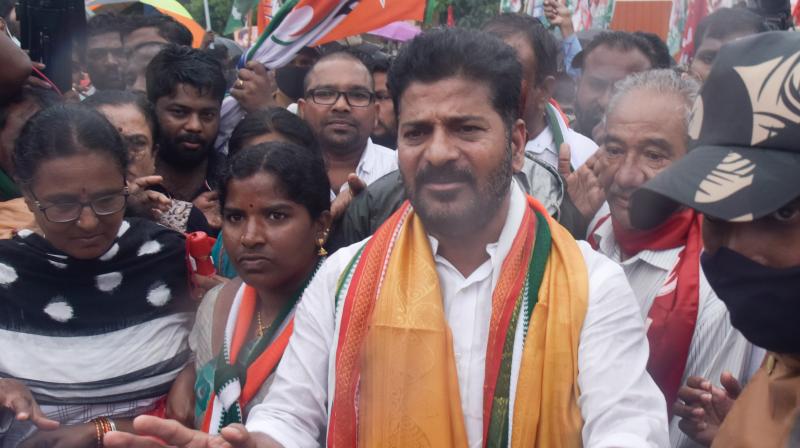 HYDERABAD: Telangana Pradesh Congress Committee (TPCC) president A. Revanth Reddy called upon people to think about the political interests of the ruling Telangana Rashtra Samiti (TRS) rather than the development of the state.

On the pretext of a separate Telangana movement, Chief Minister K. Chandrashekar Rao strengthened his party, he alleged. Basic demand of Nidhulu, Neellu, Niyamakalu (funds, water and jobs) in the separate state was utterly ignored by the TRS government, he criticised.

The TPCC conducted Vidyarthi, Nirudyoga Jung Siren programme at Amisthapur in Mahbubnagar district on Tuesday. Congress activists welcomed the TPCC chief on his way to the venue. Meanwhile, the police objected to the Congress convoy proceeding to Amistapur through Jadcharla and instead suggested they move on the highway.

Congress activists raised slogans and removed barricades on the roads. The vehicles of Revanth Reddy and CLP leader Mallu Bhatti Vikramarka passed as usual. To welcome the Congress state leaders, the party cadre set up flexis at Shamshabad, Shadnagar and Jadcherla.

Speaking on the occasion, Revanth Reddy said students and unemployed youths were facing difficulty in the TRS regime. The Congress would fight for fee reimbursement and jobs recruitment, he said. People of Mahbubnagar district elected Chandrashekar Rao as MP, but he never talked about migration problems of the district in Parliament.

Revanth Reddy said the Congress would only change the face of Telangana state. He thanked the people of Mahbubnagar for his political elevation.

CLP leader Mallu Bhatti Vikramarka said Chandrashekar Rao had failed to protect the interests of Telangana. The Congress party alerted him over illegal projects of AP government on River Krishna, but he never responded, he said. The TRS government failed to construct new projects for the last seven years, he said.

Vikramarka criticized the TRS government for preventing Congress leaders from visiting the irrigation projects. “KCR ignored funds, water and jobs for his political interests,” he said. The CLP leader demanded an all-party meeting on irrigation projects to discuss the role of the Central government and neighbouring states."