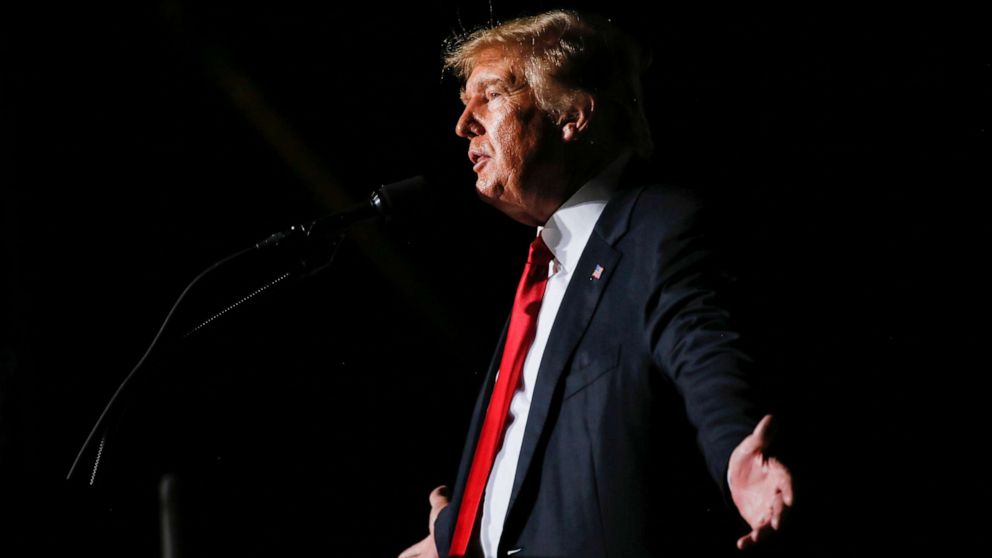 It was a point of pride and an applause line for former President Donald Trump over the weekend: “I never conceded,” he said, drawing one of the many huge ovations he got in his return to Iowa Saturday.

What Trump is less eager to talk about — and prepared to go to court to stop those close to him from even talking to a congressional committee about — are his actions on and around Jan. 6.

New reporting points to how much there is still to learn, or at least for Trump and his allies to try to explain. A Senate Judiciary Committee report late last week documented the extraordinary pressure the defeated then-president applied to the Justice Department as part of a final attempt to overturn the election results, just three days before the attempted insurrection at the Capitol.

As for what Trump was saying and doing on Jan. 6 itself, ABC News’ Jonathan Karl reported that House Republican Leader Kevin McCarthy was initially rebuffed by Trump when McCarthy told him he needed to call off his supporters from rioting, despite him telling Trump shots were just fired off the House floor.

In revelations Karl details in his forthcoming book, “Betrayal,” White House aides filmed several versions of the video message Trump would belatedly release that day. Earlier versions neglected to call on those rioting to disperse, according to Karl; the final version, of course, ended with Trump praising those who protested that day: “We love you. You are special.”

The discarded video messages are the kinds of records the Jan. 6 committee is seeking, and represent the kind of information subpoenaed individuals close to Trump might provide. That effort is headed for what seems to be an inevitable judicial showdown, with the Biden administration not shielding the records and testimony Trump wants kept private.

In case it wasn’t already obvious, Trump’s latest political flurries make clear his keen interest in resuscitating his lies about the 2020 election. And everything is not in the past: Trump is calling on his supporters to rally outside the Michigan state house on Tuesday, while his loyalists push for a “forensic audit” of the election that happened 11 months ago.

Although the battle over the debt ceiling has been put off until December, lawmakers have yet to find a path forward on the president’s priority infrastructure proposal. The ongoing impasse has this year’s most high-profile Democrat political contender outside of Washington sounding the alarm about how the gridlock is seen by constituents heading to the polls this fall.

“We have got frustration with Washington. Why haven’t we passed this infrastructure bill? It passed the U.S. Senate with 69 votes two months ago. I have been very straight on television. We’re tired of the chitty chat up in Washington. Get in a room and get this figured out,” said Virginia Democratic gubernatorial candidate Terry McAuliffe.

Speaking in an interview on CNN’s State of the Union, McAuliffe — a staunch ally of President Joe Biden — said he’s “frustrated” with his own party. The former Virginia governor recently said that Biden is “unpopular” in the state and attributes the standstill over his administration’s policy push as the reason for constituents’ dissatisfaction.

“I’m traveling all over Virginia. They’re worried about minimum wage. They want child care. They want elderly care. They want to see paid sick leave, family medical leave …They want them to get their job done. They’re paid to get up in Washington. Get this done,” McAuliffe said Sunday.

According to FiveThirtyEight’s polling average, the race to lead Virginia indicates a close contest come November, perhaps too close for McAuliffe’s comfort. In recent weeks, he’s tried to distance himself from the president — during the last debate against Republican opponent Glenn Youngkin, McAuliffe said that the proposed $3.5 trillion cost of Democrats’ reconciliation package was “too high.” McAuliffe’s latest comments are likely to add more pressure to a race that is already set to serve as a bellwether over how Biden’s political brand could translate into next year’s midterms.

Over the weekend, North Carolina Lt. Gov. Mark Robinson remained defiant amid calls for his resignation, declaring he “will not back down” over comments he made calling “transgenderism” and homosexuality “filth” and asserting children should not be taught about LGBTQ topics in schools.

Robinson, a Republican, posted a video to social media defending his comments and accusing “the media and those on the left” and generalizing them to mean that he hates the LGBTQ community.

“However, the idea that our children should be taught about concepts of transgenderism and be exposed to sexually explicit materials in the classroom is abhorrent,” Robinson said.

But the lieutenant governor is rallying his defenders, launching a petition for them to sign in support of him and arguing this outcry is just “an attempt to once again change the argument and silence voices on the right.”

ABC News’ “Start Here” podcast. Monday morning’s episode begins with an update on the state of the economy from ABC News’ Elizabeth Schulze, who tells us what to expect heading into the holiday season. Then, ABC News Congressional Correspondent Rachel Scott talks about her reporting in Texas after the 5th Circuit Court of Appeals agreed to reinstate the state’s near-total abortion ban. And ABC News contributor Steve Ganyard offers his analysis on security risks after a current U.S. Navy employee and his wife were charged with sending restricted naval data internationally. http://apple.co/2HPocUL