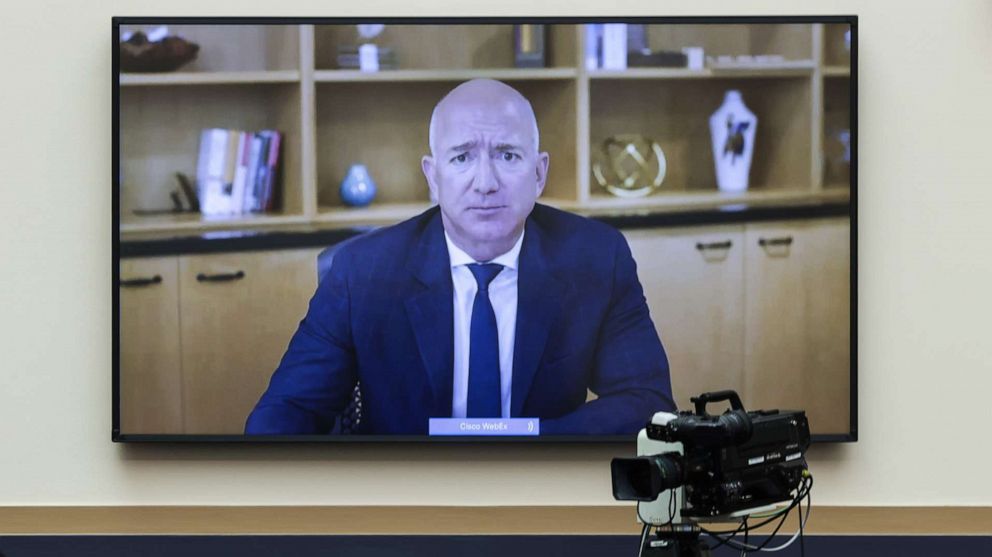 A bipartisan group of lawmakers is accusing Amazon leadership — including former CEO Jeff Bezos — of misleading or lying to Congress in the wake of reports from media outlets that they say “directly contradicts the sworn testimony and representations” from Amazon about its business practices.

In a letter sent to Amazon CEO Andy Jassy on Monday, lawmakers on the House Judiciary Antitrust Subcommittee are asking the e-commerce giant to correct the record and provide “exculpatory evidence” to corroborate prior testimony and statements made to the committee.

The lawmakers reference investigative journalism pieces from Reuters and The Markup that alleged Amazon used data from individual sellers to create similar items and boost its own products in India, and that Amazon places products from its own brand ahead of those from competitors even on the U.S. site.

“At best, this reporting confirms that Amazon’s representatives misled the Committee,” the letter, signed by Reps. Jerrold Nadler, D-N.Y., David N. Cicilline, D-R.I., Ken Buck, R-Colo., Pramila Jayapal, D-Wash., and Matt Gaetz, R-Fla., states. “At worst, it demonstrates that they may have lied to Congress in possible violation of federal criminal law.”

“In light of the serious nature of this matter, we are providing you with a final opportunity to provide exculpatory evidence to corroborate the prior testimony and statements on behalf of Amazon to the Committee,” the lawmakers added. “We strongly encourage you to make use of this opportunity to correct the record and provide the Committee with sworn, truthful, and accurate responses to this request as we consider whether a referral of this matter to the Department of Justice for criminal investigation is appropriate.”

An Amazon spokesperson denied the allegations raised in the letter, and called the media articles in question “inaccurate.”

“Amazon and its executives did not mislead the committee, and we have denied and sought to correct the record on the inaccurate media articles in question,” a company spokesperson told ABC News in a statement Monday. “As we have previously stated, we have an internal policy, which goes beyond that of any other retailer’s policy that we’re aware of, that prohibits the use of individual seller data to develop Amazon private label products.”

“We investigate any allegations that this policy may have been violated and take appropriate action,” the statement added. “In addition, we design our search experience to feature the items customers will want to purchase, regardless of whether they are offered by Amazon or one of our selling partners.”

The lawmakers, meanwhile, point to the “credible reporting” in Reuters and The Markup. The lawmakers said the claims made in the recent articles are at odds with the July 16, 2019 testimony from Nate Sutton, Amazon’s Associate General Counsel, who told them that Amazon does “not use any seller data for — to compete with them” and that Amazon does not “use any of that specific data in creating our own private brand products.” Moreover, Sutton also testified that Amazon’s search rankings are not designed to favor its own products.

The lawmakers also pointed to a July 29, 2020, testimony from then-CEO Jeff Bezos, who said that Amazon enforces a policy against using seller-specific data to develop competing products, but that Amazon considers seller data from more than a single seller to be “aggregate” for the purpose of this policy. Bezos claimed in response to post-hearing questions that this policy “prohibits the use of anonymized data, if related to a single seller, when making decisions to launch private brand products,” the lawmakers added.

The representatives are asking Amazon to provide a sworn response to clarify the record as to how Amazon uses non-public individual seller data to develop and market its own line of products, as well as a sworn response to clarify how Amazon advantages its own products over products from other sellers in its search rankings. Finally, the lawmakers are seeking all documents and communications relating to its internal inquiry into violations of its Seller Data Protection Policy, as well as documents and responses referred to in the Reuters and Markup reports.

An Amazon spokesperson told the Markup that there is a difference between search results and merchandising placements, but that it does not favor its own brands in the search tool.

“We do not favor our store brand products through search. There is a difference between search results and the placements [the Markup] is referring to – ‘Featured from our brands’ – which are merchandising placements. As [The Markup] notes, these placements are clearly labeled to distinguish them from search results,” a company spokesperson said. “These merchandising placements are optimized for a customer’s experience and are shown based on a variety of signals, starting with relevance to the customer’s shopping query.”

The company spokesperson added that they look at sales and store data to enhance customer experience, “However, we strictly prohibit our employees from using non-public, seller-specific data to determine which store brand products to launch.”

An Amazon spokesperson told Reuters, meanwhile, that “these allegations are incorrect and unsubstantiated” and that it “does not give preferential treatment to any seller” on its marketplace. In addition, the company reiterated that it displays search results “based on relevance to customers, irrespective of whether such products are private brands offered by sellers or not.”