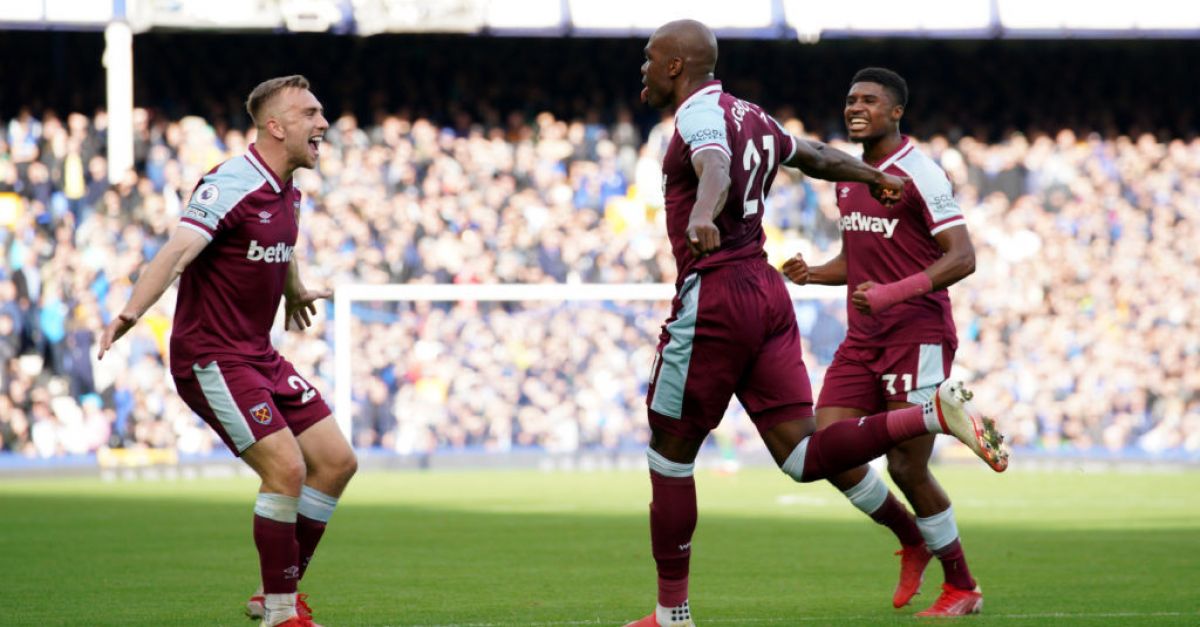 The pair had previously met 15 times – 12 of those as managers on opposing sides of Stanley Park with the Spaniard then Liverpool boss – and Moyes had won just twice.

So this was a satisfying return to his old stomping ground for the Scot with Ogbonna’s 74th-minute goal denying Benitez the chance to record Everton’s best start to a season since 1978-79.

The nature of the goal was somewhat familiar to all inside the ground as, much like during his 11 years with the Toffees, it came from a set-piece.

Since his first game back in charge at West Ham, his side have earned a reputation as dead-ball specialists – and they have scored more (29), excluding penalties – than any other Premier League side.

There was a whiff of controversy as referee Stuart Atwell ruled Michail Antonio’s awkward challenge on goalkeeper Jordan Pickford had earned a corner despite protests from the home team.

Having wasted a good start to the game, Moyes would have been relieved to have left with three points, which lifted West Ham back into the top six.

Everton, still without their two biggest attacking threats Dominic Calvert-Lewin and Richarlison due to injury, barely had a kick for 20 minutes.

They were pinned back by the visitors’ flying start, propelled forward by Pablo Fornals and Said Benrahma with England midfielder Declan Rice knitting things together from deep.

But, bizarrely, it was Benitez’s side who squandered the best opportunity of the half when Demarai Gray beat Ogbonna by the corner flag and crossed the ball to the near post.

The proximity of Salomon Rondon may have put off team-mate Alex Iwobi at the near post, but his swing and a miss from six yards was inexcusable.

Abdoulaye Doucoure headed another good chance wide, this time from an Andros Townsend cross, while a Tomas Soucek goal at the other end was chalked out for offside after he converted a rebound from Jarrod Bowen’s shot.

Moyes would have gone in at half-time wondering how his side were not ahead, Benitez would have been grateful they were not.

FT. Our winning start at home comes to an end.

The Spaniard’s tactical switching of Gray to the left and Iwobi centrally – late in the first half – had the two-fold effect of giving the former more freedom to attack 21-year-old right-back Ben Johnson, standing in for the injured Vladimir Coufal, while also reducing Rice’s influence in the centre.

Everton enjoyed more control after the break with Iwobi’s shot on the turn deflected behind and Rondon glancing a header just wide from Townsend’s inswinging cross as West Ham started to lose their way.

However, the match turned on Antonio’s challenge on England’s number one: Ogbonna glanced home Rice’s cross and with it went Benitez’s unbeaten home record.