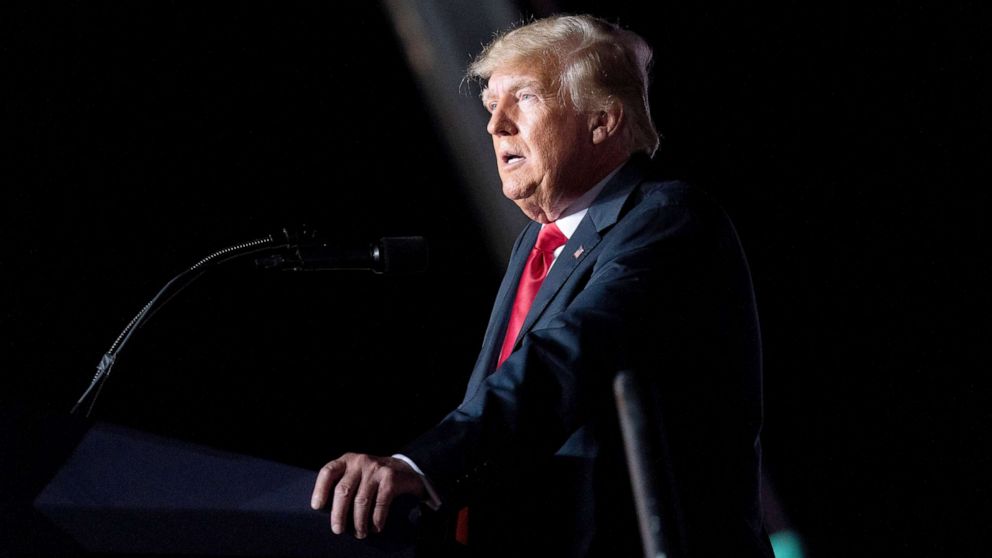 It’s not just Republicans who are counting on former President Donald Trump to turn out their voters.

First lady Jill Biden on Friday will kick off a trend of sorts — nationally prominent Democrats campaigning in Virginia for Terry McAuliffe in the governor’s race against Glenn Youngkin, with final voting two-plus weeks away.

Really, though, Democrats are squaring up against Trump. The former president and his supporters are helping their messaging at the moment — even as Youngkin walks as fine a line as any Republican can conjure these days.

The final stretch was teed up to Democrats’ liking by a bizarre scene Wednesday night outside Richmond. A campaign rally for the GOP ticket — where Trump himself called in to tout Youngkin, and where Steve Bannon spoke — featured a Pledge of Allegiance to a flag purportedly flown at the Jan. 6 rally that preceded the riot at the Capitol.

Youngkin later called that “weird and wrong” and condemned the violence of Jan. 6 as “sickening.” But Democrats who have long been eager to tie Youngkin to Trump have a fresh episode to cite in refreshing memories of the attempted insurrection — memories Trump is doing his part to revive with his continued focus on lies about the 2020 election.

If McAuliffe loses, it will be seen as an ominous sign for Democrats’ prospects next year. It won’t be for lack of boldfaced-name supporters: Stacey Abrams is set to campaign in Virginia Sunday, and President Joe Biden and former President Barack Obama are also slated to come help before Nov. 2.

Oddly, Democrats who have long hoped that Trump would fade away find themselves rooting for Trump to say more rather than less about the race in Virginia.

The head of Chicago’s ​​Fraternal Order of Police, John Catanzara, is urging officers not to comply with the city’s COVID-19 vaccine identification requirement by the Friday deadline, putting union members in violation of rules set by Chicago Mayor Lori Lightfoot.

The stance comes against the backdrop of several other evolving labor movements across the country and is sure to complicate how lawmakers navigate the overlapping nature of the labor, business and political sectors.

In a video posted to Facebook earlier this week, Catanzara said his guidance is not meant to start a strike but told members to “hold the line” from reporting their vaccination status to the city. Under the existing requirement, all city employees must have submitted their vaccination status by Friday, and unvaccinated workers who refuse to submit to semiweekly testing will be put on unpaid leave.

“All I can tell you is if we suspect the numbers are true and we get a large number of our members to stand firm on their beliefs, that this is an overreach and they’re not going to supply the information in the portal and they’re not going to submit to testing, then it’s safe to say that the city of Chicago will have a police force at 50% or less for this weekend coming up,” Catanzara said.

Amid the standoff with the police union, Lightfoot said she does not anticipate the department being short-staffed over the weekend.

“I am confident that [officers] will be in compliance [with the mandate], and if they’re not, obviously there will be consequences,” she said.

Democratic Senate candidates have a history of headline-making fundraising numbers — but it takes more than millions of dollars to win a campaign. Florida Rep. Val Demings announced this week she had raised $8.4 million in the third quarter, more than any other Senate campaign in Florida history at this point.

Demings is running to unseat Sen. Marco Rubio, who announced that he had raised $6 million in the third quarter. Despite her windfall, her campaign said it still expects Rubio’s campaign to be better funded because of the “vast amounts of wealthy corporate money that Mitch McConnell and Marco Rubio will spend in this election.”

The donor enthusiasm is clearly there for Demings, who was thought to be a top vice-presidential contender. But millions of dollars in the bank doesn’t necessarily equal a successful campaign, as was evidenced by flashy fundraising numbers by the likes of Amy McGrath in Kentucky and Sara Gideon in Maine last year. Both lost their Senate races with sizable margins in 2020.

In 2020, Trump won the state by over 370,000 votes, and Rubio sailed to an easy win with a nearly eight-point lead in his 2016 election. Floridians haven’t opted for Democrats in a presidential race since 2012, haven’t chosen a Democrat for governor since 1994 and last sent a Democrat to the Senate in 2012. As home of the de facto leader of the Republican Party and some of its rising stars, Demings has an uphill battle as the state teeters on the edge of becoming a comfortably red state.

ABC News’ “Start Here” Podcast. Friday morning’s episode begins with the debate over COVID-19 vaccine boosters and an FDA advisory panel’s endorsement for a lower-dose Moderna shot. ABC News contributor Dr. John Brownstein tells us his takeaways and the next steps for the Moderna and Johnson & Johnson boosters. Then, ABC News Investigative Reporter Katherine Faulders breaks down the latest with the Jan. 6 committee probe, now moving to hold former Trump adviser Steve Bannon in criminal contempt for defying the panel’s subpoena. And, Michigan is facing another lead water crisis. An organizer in Benton Harbor tells us about concerns on the ground. http://apple.co/2HPocUL