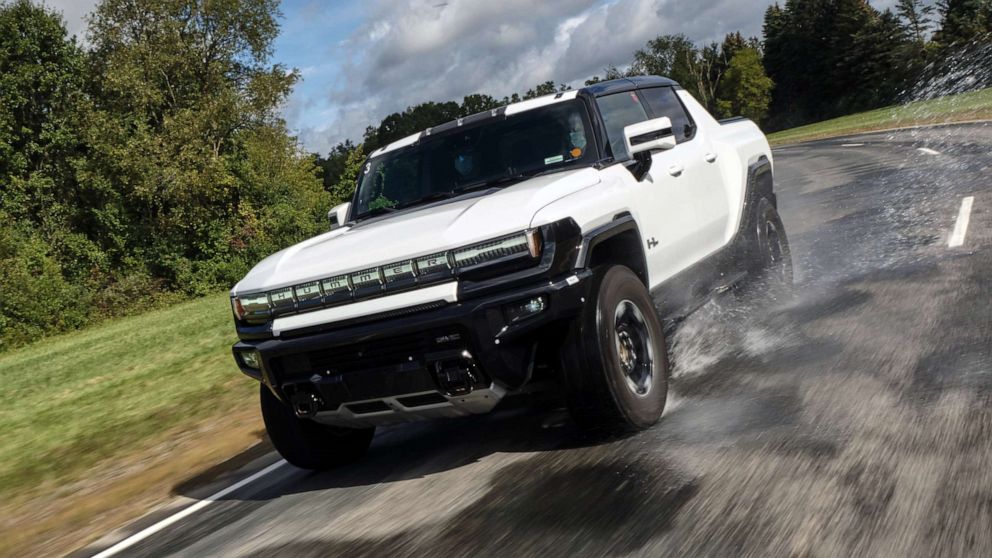 “Attack the grade here. Now mash the brake and modulate the throttle,” Al Oppenheiser, the chief engineer of GMC’s Hummer EV, guided me as I carefully steered the 9,000-lb. truck up a steep, rocky incline.

Oppenheiser and I were driving an early prototype of the $112,595 pickup truck along a course designed to test its on-road and off-road capabilities at General Motors’ proving grounds in Milford, Michigan.

Oppenheiser, a longtime GM employee and former chief engineer of the Camaro, dedicated nearly three years to building the all-electric Hummer. The leviathan conquers off-roading meccas, nimbly handles tight corners and illustrates how internal combustion engines are relics of the past.

Customer deliveries of the Hummer EV Edition 1 begin in December. First-year production is completely sold out though a GM spokesperson declined to say how many are being built. The next Hummer EV, a sport utility vehicle, launches in the first quarter of 2023.

The Hummer EV, which debuted a year ago, already has formidable competition in the red-hot EV truck market: Tesla’s Cybertruck, Rivian’s R1T, the Ford F-150 Lightning, the Fisker Alaska, Bollinger’s B1 and B2. In January, GM will also introduce an all-electric Sierra pickup truck, built with the same Ultium battery-pack technology as in the Hummer. Seeing GM and Ford workers pull up to production plants in brawny diesel and V8-powered trucks motivated Oppenheiser to develop a hardcore electric pickup.

“I would ask myself, ‘Why would these people buy an electric truck?'” Oppenheiser said. “A truck is a truck in our opinion. The off-roading world has been waiting to see what EV trucks can do.”

GM has invested billions in its third-generation EV platform and is targeting annual global EV sales of more than 1 million by 2025. Battery cells will be mass-produced at a $2.3 billion plant GM is building with its partner LG Chem in Lordstown, Ohio. The Ultium system could offer driving ranges of up to 400 miles on a full charge and 0 to 60 mph acceleration of 3.0 seconds, according to the Detroit automaker.

“You’re buying this vehicle for lots of reasons. One of them is 1,000 hp,” Oppenheiser said.

Ed Kim, an analyst and vice president at AutoPacific, has his doubts that traditional, die-hard truck owners are ready to shift to EVs. Power and torque — key features on any EV — matter greatly to this core group of buyers but, he argued, truck owners can be averse to change.

“The Hummer won’t have [Ford] F-Series volume here,” he told ABC News, referring to the top-selling truck in the U.S. for 44 straight years. “But GM does not have to sell a ton of Hummers for it to be a success. There are plenty of people out there ready to pay six figures for a high-image vehicle.”

He went on, “Every automaker has decided there is gold to be found in electric trucks. We’re seeing a saturation in truck EV space … there are too many too soon in the short term.”

“Every year we see range going up, better performance … there is a rapid level of learning among automakers,” he noted. “We’ll still see battery hiccups here and there. Everyone is having growing pains. Battery chemistry is new to automakers and engineers are still figuring it out.”

GM’s engineering teams, seeking to maximize power and range in upcoming EVs, are hard at work on the next iteration of cell chemistries, according to Kevin Robinet, assistant chief engineer of GM’s battery electric propulsion systems.

“We’re already talking about battery improvements for mid-decade,” he told ABC News. “It’s an evolving tech. As energy density improves, batteries will weigh less and so will the vehicles.”

“This is a halo product for GMC and for the Ultium battery technology,” he told ABC News, adding, “GMC has not had a halo product since the Typhoon,” a high-performance SUV that GM produced from 1991 to 1993.

And the reborn Hummer, a shell of its boxy, gas-guzzling former self, may finally win over the environmentalists who once decried its hefty carbon footprint.

“It behaves more like a supercar than a pickup truck,” Colwell said. “GM is going after a completely different audience — the early adopters, the Tesla buyers.”

At the proving grounds, the Hummer EV tackled each drill with finesse, performing a full-turning circle (“You’d never be able to do this in a solid rear-axle truck,” Oppenheiser declared), maneuvering like a crab on dirt, slaloming through serpentine cones and accelerating instantaneously in “Watts to Freedom” launch control mode.

Getting Americans aboard the EV bandwagon will be a daunting task for legacy automakers like GM. But Oppenheiser, a “high-performance car guy” with over 2,000 hp in his garage, said the Hummer will convince others like himself that it’s possible.

“It’s pretty damn cool,” he said with a laugh.