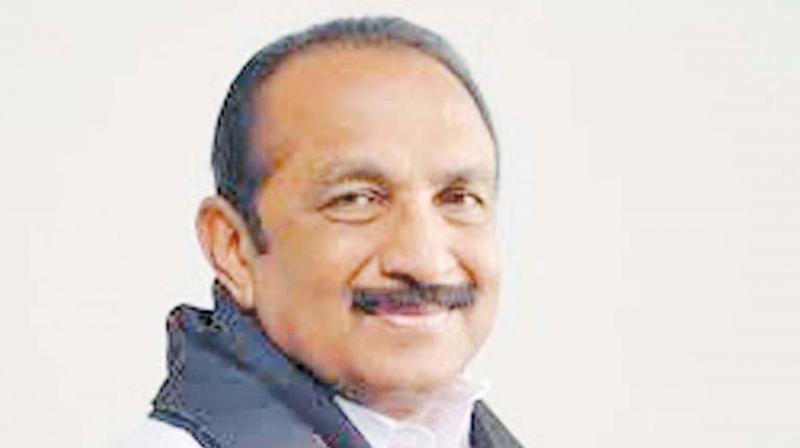 Chennai:  The first stirrings of anger against MDMK founder Vaiko nominating his son Durai Vaiko as party headquarters secretary were felt on Thursday with the State Youth Wing Secretary of the party, V Eswaran, leaving the party in protest against what he called  ‘dynastic politics.’

Easwaran, who said that he has been with Vaiko since he left the DMK 28 years ago protesting against alleged ‘dynastic politics,’ said that Vaiko’s perception that only his son could lead the party was unacceptable.

He claimed that there were many others in the party who were disillusioned by Vaiko’s move to induct Durai Vaiko and added that he would organize them all and launch a non-political movement to cleanse politics and name it Marumalarchi Makkal Iyakkam.

Regretting that Vaiko has failed to groom a single leader to take over the party from him, Easwaran said that he did not agree with the claim that it was the cadre who pitched for Durai Vaiko.

After he made the announcement to quit MDMK through Facebook, many leaders in the party urged him to reconsider his decision, he said, adding that he declined to entertain their requests.

On the other hand, posters hailing the appointment of Durai Vaiko appeared on the city walls showcasing the celebrations within the party.

Though Vaiko had claimed on Wednesday that the party cadre had been promoting Durai Vaiko without his knowledge and that he was averse to the idea of bringing in his son, insiders point out that it was not true.

Vaiko had been taking his son around to meet people for quite some time and had even taken him along when he called on the Chief Minister, M K Stalin, recently, adding credence to the popular charge that inducting him formally into the party was a well calculated move.

Though leaders inducting children into their parties is a common practice in India and even Tamil Nadu has too many such inheritors of their fathers’ mantle, the development in MDMK caused the raising of many eyebrows mainly because the party itself was launched in protest against dynastic politics.

That Vaiko had orchestrated it quite well by holding a plebiscite, asking party functionaries to tell through secret ballot if they were for or against his son being entrusted with responsibilities in the party and ensuring that 104 of the total 106 voters favoured his coming in, did not help much.

Critics say that the plebiscite was just a farce and that Vaiko has, at the end of the day, turned out to be like any other political leader in the State.