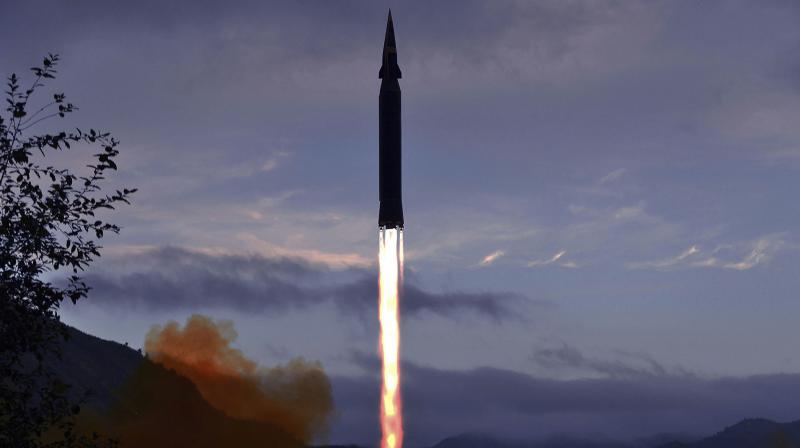 New Delhi: India is among the select few countries worldwide that are developing “hypersonic weapons technology” which threaten to bypass most of the current missile defence systems to deliver nuclear bombs, the quasi- independent US Congressional Research Service said in its latest report.

This comes amid concern in the US over a report that China had recently tested a nuclear-capable hypersonic missile that circled the globe before moving towards its target. This could provide China with a space-based global strike capability and further reduce the amount of target warning time prior to a strike.

While the Chinese missile is said to have missed its target, it showed that the country had the capability to develop such weapons. This took the US by surprise as it had expected China to take much longer to reach this stage. Moreover, experts believe that in case of nuclear weapons, even if the bomb misses its target by a few kilometres, it is still very dangerous.

Hypersonic missiles fly at speeds of at least Mach 5 (five times the speed of sound) but are more manoeuvrable than ballistic missiles. “Although the United States, Russia and China have the most advanced hypersonic weapons programmes, a number of other countries — Australia, India, France, Germany and Japan — are also developing hypersonic weapons technology,” said the report to presented to the US Congress.

It said India had collaborated with Russia on the development of the BrahMos-II, a Mach 7 hypersonic cruise missile. “Although BrahMos-II was initially intended to be fielded in 2017, news reports indicate that the programme faces significant delays and is now scheduled to achieve initial operational capability between 2025 and 2028,” said the report. It said India was reportedly also developing an indigenous, dual-capable hypersonic cruise missile as part of its Hypersonic Technology Demonstrator Vehicle programme and successfully tested a Mach 6 “Scramjet” in June 2019 and September 2020.

It said India operates approximately 12 hypersonic wind tunnels and is capable of testing speeds of up to Mach 13. The report said hypersonic weapons could challenge detection and defence due to their speed, manoeuvrability and low altitude of flight. “For example, terrestrial-based radar cannot detect hypersonic weapons until late in the weapon’s flight. This delayed detection compresses the timeline for decision-makers assessing their response options and for a defensive system to intercept the attacking weapon — potentially permitting only a single intercept attempt,” it said.

The report quoted Russian President Vladimir Putin to put forth the point that Russia and China were developing hypersonic weapons as they fear that the US is increasingly deploying more anti-ballistic missiles, improving their quality and creating new missile launching areas. “If we don’t do something, eventually this will result in the total devaluation of Russia’s nuclear potential. This means that all our missiles could simply

be intercepted,” the report quoted Mr Putin as saying. It noted Russia thus seeks hypersonic weapons, which can manoeuvre as they approach their targets, as an assured means of penetrating the US missile defences and restoring its sense of strategic stability.

“China’s pursuit of hypersonic weapons, like Russia’s, reflects a concern that US hypersonic weapons could enable the United States to conduct a pre-emptive, decapitating strike on China’s nuclear arsenal and supporting infrastructure. US missile defence deployments could then limit China’s ability to conduct a retaliatory strike against the United States,” said the report.