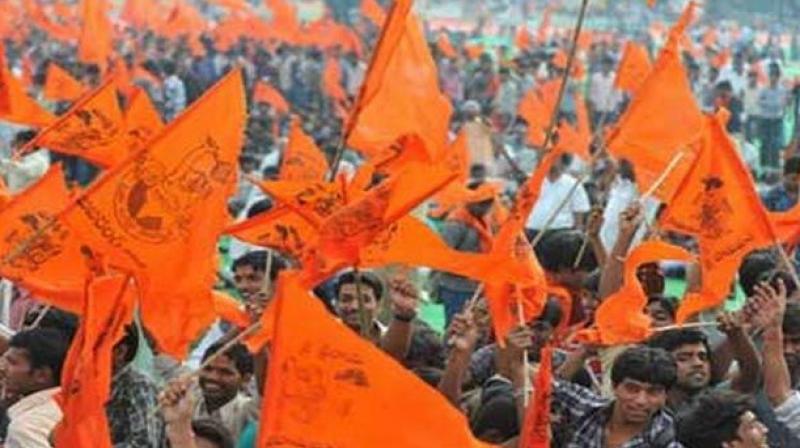 HYDERABAD: A host of right-wing forces are said to be working hard clandestinely to ensure victory of BJP candidate Etala Rajendar in the upcoming Huzurabad byelection, scheduled to be held on October 30.

Leaders and activists of different right-wing organisations are burning their midnight on the sly in the high voltage byelection, where the ruling TRS, the BJP and the Congress fielded their candidates.

Rashtriya Swayamsevak Sangh (RSS), Vishwa Hindu Parishad (VHP), Bajrang Dal, Hindu Vahini and other spiritual organisations have been working in favour of the saffron party candidate, it is learnt. During the last one month, many leaders and activists rushed to villages in Huzurabad Assembly constituency and carried out election campaigns.

Local residents say that it is an open secret that a team of right-wing organisations arrive and carry out intensified campaign in many villages. The RSS, VHP, Bajrang Dal and Hindu Vahini activists are said to be explaining to the voters, why they should support the BJP candidate and why reject others.

Surprisingly, these leaders are not getting any logistic support from the BJP, but are voluntarily working in favour of the BJP candidate.

Speaking to this newspaper, BJP leader J. Sangappa admitted that RSS, VHP, Bhajaran Dal and other organisations were working for BJP victory in Huzurabad byelection. “

They (the right-wing organisation leaders) are not in contact with the BJP leadership, they work on their own,” he explained. “We don’t have any communication with them, but they strongly influence voters with their sincerity and simplicity,” he said.

On the other hand, BJP leaders and its frontal organisations are also working hard for the victory of Rajender. Most of the senior leaders are camped in Huzurabad and nearby Warangal city to carry out election campaign.

Different morchas of the BJP are working seriously for the victory in byelection, which has turned to be a prestigious issue for the BJP.