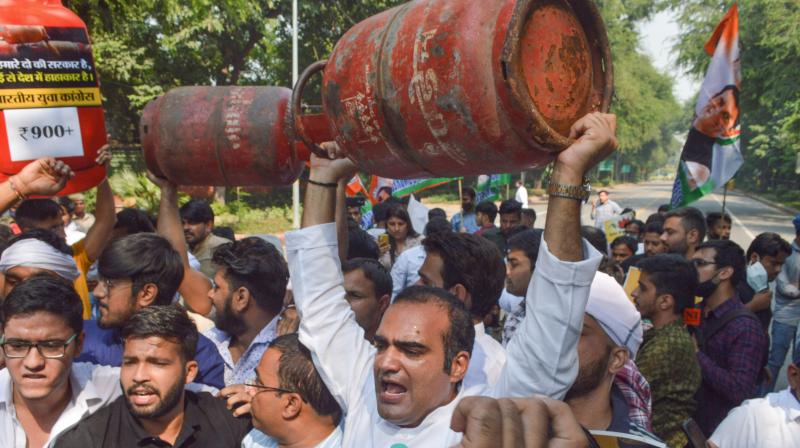 New Delhi: With the LPG prices skyrocketing, the Centre is planning sale of small LPG cylinders through ration shops. In a bid to enhance the financial viability of fair price shops (FPS), the government is planning to allow them to offer financial services in consultation with states.

The moves come amidst indications that the Centre is planning to raise LPG prices in the first week of November as the under-recovery on the fuel has widened to over Rs 100 per cylinder. The LPG rates were last hiked by Rs 15 per cylinder on October 6, taking the total increase in rates since July to Rs 90 per a 14.2-kg cylinder.

Smaller cylinders are expected to increase affordability of cooking gas for the less privileged. When domestic LPsG prices were regulated by budgetary subsidies, the government was incurring losses to keep the effective price of a cylinder closer to Rs 500. However, currently, domestic LPG cylinders (14.2 kg) are sold at market prices, "but the government continues to subsidise freight for consumers in some parts of the country," a source in a PSU oil firm said.

"The subsidy on LPG gas has become limited as the government thinks only the most needy should be given a subsidy. For last one year or so, the subsidy has been discontinued for common users, but only Ujjwala (Pradhan Mantri Ujwala Yojana) beneficiaries will get some amount of subsidy, not the full as earlier they used to get," the source said.

Government sources said the move to allow retail sale of small LPG cylinders through fair price shops is part of the Centre’s measures to enhance the financial viability of these outlets. This decision was taken after a virtual meeting with state governments, chaired by food secretary Sudhanshu Pandey.

After the meeting, the food and consumer affairs ministry said in a statement, "Proactive measures to be taken to enhance financial viability of FPS. …Plan of retail selling of small LPG cylinders through fair price shops (FPS) on the anvil."