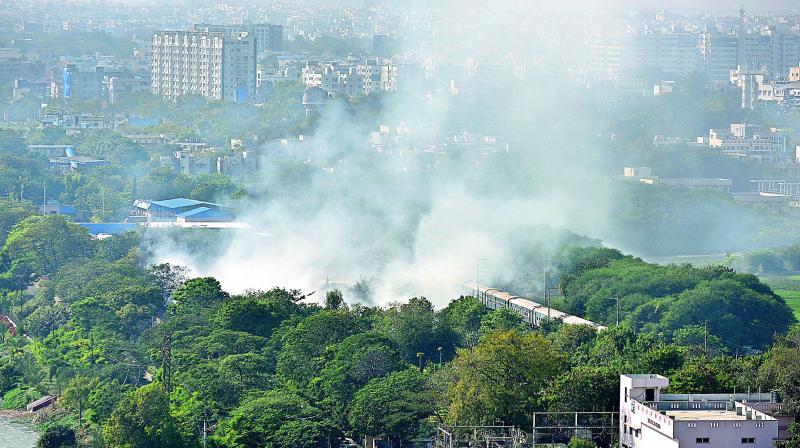 KOTHAGUDEM: Burning of 90 per cent of garbage being generated from four municipalities that have opencast mines in Bhadradri-Kothagudem district is adding to the existing pollution levels, posing serious health hazards to the people in the area.

The four municipalities – Kothagudem, Paloncha, Manuguru and Yellandu – are collecting 102 tons of garbage per day and the officials are burning 90 tons of garbage and recycling 12 tons per day. The four towns are being considered as polluted due to the opencast mines and thermal power units.

In Kothagudem, there are two open cast mines apart from underground mines. Temperature in the coal town usually touches more than 45 degrees Celsius during summer. The officials are recycling only one ton against 34 tons of garbage every day and the rest is being burnt.

The Paloncha town has Kothagudem Thermal Power Station (KTPS) and it is releasing tons of ash into the air every day. To add to it, the municipality collects 38 tons of garbage every day and is burning 35 tons per day. Apart from the KTPS, there are four other companies like Sponge Iron India Limited and Navabharat Ferro Alloys Limited.

Manuguru, which was a peaceful town till a decade ago, joined the list of polluted towns with opencast mines and Bhadradri Thermal Power Station. The municipal officials are burning all 14 tons of garbage every day. The situation in Yellandu is no different and the town is the first coal mine area in Telangana. The officials collect sixteen tons of garbage per day from 24 wards of Yellandu and are burning all of it.

C. Edukondalu, a resident of Paloncha said, “The sanitation workers are dumping garbage near the hillock of Srinivasa Nagar Colony and setting fire. As there is no segregation of garbage, plastic bottles and covers are also burnt. The stench is unbearable to us”.

As per the Pollution Control Board, the air quality index (AQI) in Paloncha is 150 to 180 while burning of garbage or releasing of fly ash from KTPS and it is 112 during normal times. The air quality is considered as poor if the AQI is between 201 and 300.

The AQI in the areas near to the garbage burning area is 150 in Kothagudem and it is 47 in normal times. Manugur and Yellandu towns have high air pollution while burning garbage. M. Bhaskar from Manuguru, said, “Air pollution in Manuguru in the coming years will be more as opencast mines are being expanded and the Bhadradri Thermal Power Station is nearing completion, which is near to the town.”