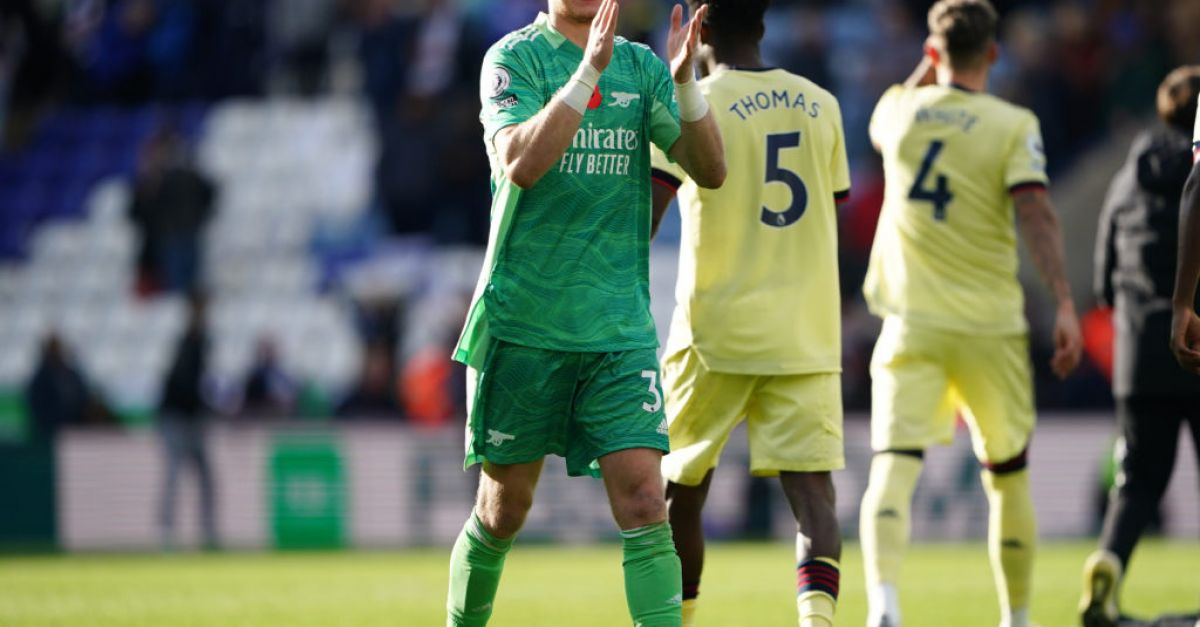 Arsenal reaped the benefits of a fast start as they continued their fine run with victory at Leicester on Saturday, with goalkeeper Aaron Ramsdale in inspired form.

Gabriel Magalhaes and Emile Smith Rowe – with his fourth goal in seven games – had the visitors on top within the opening 20 minutes at the King Power Stadium and Arsenal headed back down the M1 with a 2-0 win after stoutly defending their advantage.

The victory is a seventh in nine across all competitions for Mikel Arteta’s side, who showed glitz and guile in equal measure to outfox Leicester.

Brendan Rodgers has overseen something of a mini-revival after Leicester’s slow start to the season almost paralleled that of Arsenal, but – after beating Manchester United here last time out in the league – they could not find a way back into the game.

Even Jamie Vardy, fit enough to start following a knee injury, could not inspire a comeback and add to his 10 goals in 12 previous appearances against one of his favourite opponents.

Arsenal set the tone early, with Bukayo Saka – on his 100th appearance for the club – seeing an effort blocked which Daniel Amartey almost inadvertently then steered into his own goal.

Scoring from set-pieces is becoming a regular occurrence for the Gunners and it was a Gabriel header from Saka’s corner which broke the deadlock as the Brazilian celebrated his first goal since March.

With Alexandre Lacazette battling for the ball in the box, it was cleared into the path of the academy graduate, who made no mistake with a clinical finish.

Benjamin White has made a fine start to life at Arsenal and was passed fit to play here after illness, but he conceded a silly free-kick on the edge of his own box as half-time approached.

James Maddison, a reported summer target for Arsenal, bent over a perfect effort which Ramsdale did brilliantly to tip onto the post at full stretch, jumping back up to keep out Jonny Evans’ effort from the rebound.

The save was so good, even Peter Schmeichel, whose son Kasper was in goal at the other end, tweeted that it was the best he had “seen for years”.

Best save I’ve seen for years by Ramsdale👏👏👏

Rodgers reacted to the hosts’ first-half display by introducing Harvey Barnes and Ademola Lookman, with the Foxes much brighter following the restart.

Still Leicester pushed as Ramsdale turned a Lookman shot behind, the former Sheffield United goalkeeper becoming increasingly important as he then made himself big to save from Barnes.

Vardy’s chances had been quite limited and he uncharacteristically miscued a header as the game entered the final quarter with Arsenal still holding on.

Evans was arguably lucky to avoid a red card as he dragged Pierre-Emerick Aubameyang down with no other defenders around him but was only booked by referee Michael Oliver.

Schmeichel made a big save of his own soon after, keeping out Aubameyang’s effort from five yards out, with Leicester unable to find a way through in the closing stages as Arsenal held on for the three points.