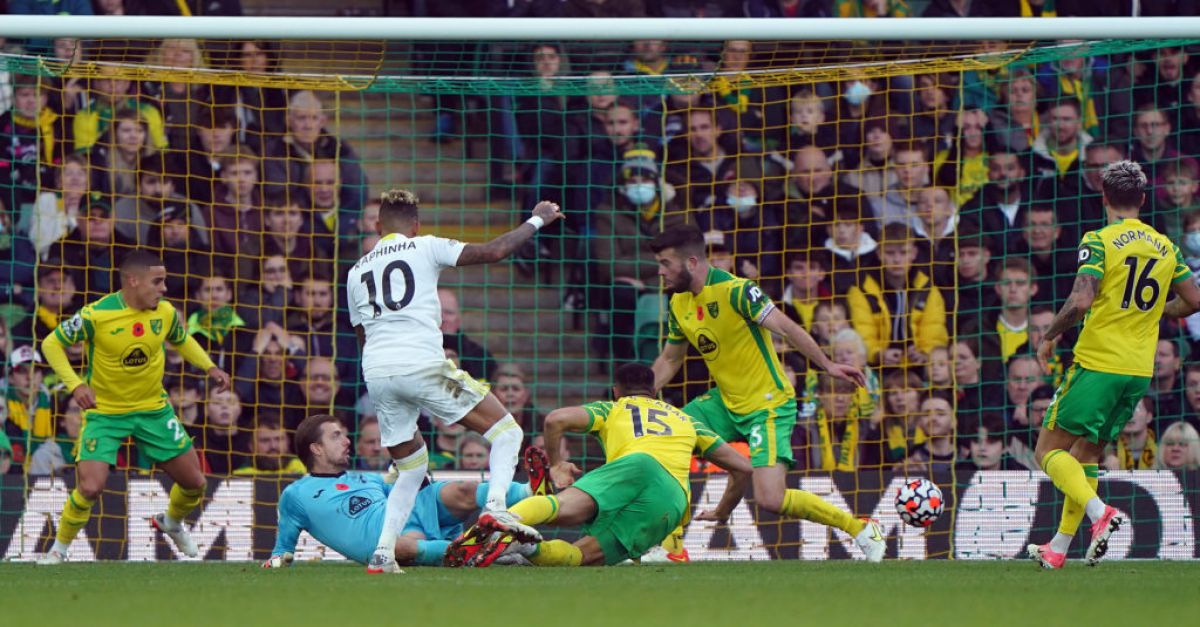 Raphinha and Rodrigo grabbed second-half goals to earn Leeds a 2-1 win that continued Norwich’s nightmare return to the Premier League.

A crazy four-minute spell after the break settled the game as Marcelo Bielsa’s men picked up a second top-flight victory of the season.

Raphinha opened the scoring in the 56th minute before Irish defender Andrew Omobamidele levelled, but the Canaries succumbed to Rodrigo’s long-range effort that slipped through Tim Krul’s grasp as their winless run in the Premier League extended to 20 matches.

Daniel Farke reacted to the 7-0 horror show at Chelsea by ditching the five at the back formation which had been used in the last four games and handed opportunities to Omobamidele and Kieran Dowell, who were both making only their second league starts this season.

While Leeds created the first chance, it was largely the Sky Bet Championship winners who dominated the opening exchanges.

Daniel James, minutes after he survived some half-hearted penalty appeals for handball, came close to a first goal for Bielsa’s side since a summer switch from Manchester United..

Stuart Dallas played the Welshman through in the eighth minute and James rounded Krul before he fired towards goal from a tight angle but Norwich captain Grant Hanley got back on the line to clear.

It was not a sign of things to come, with Teemu Pukki firing wide after a poor clearance by James while Max Aarons and Mathias Normann tried their luck but did not trouble Leeds goalkeeper Illan Meslier.

For all the Canaries’ huffing and puffing, the visitors were slowly beginning to click into gear with Diego Llorente heading over before Rodrigo shot straight at Krul.

There was still time for Milot Rashica to test Meslier with a long-range shot which had been going wide and Normann drilled off target from the resulting corner to ensure it was goalless at half-time.

After a lack of clear-cut opportunities during the opening 45, that all changed at the beginning of the second period.

First Raphinha produced the type of quality which had been lacking throughout when he rifled home for his fourth goal of the season.

James passed out to the Brazilian on the right and Leeds’ number 10 cut inside Omobamidele and Hanley before he fired back across goal into the bottom corner.

Norwich responded two minutes later after Meslier passed the ball out for a corner, which Rashica whipped in for Omobamidele to head home for his first professional goal.

It would not last long however with Leeds retaking the lead on the hour mark following a critical error.

Kalvin Phillips passed into the path of Rodrigo, who was given too much time and let fly from 30-yards with a swirling left-footed drive which slipped through Krul and found the net.

Bielsa’s internal delight was briefly interrupted when Raphinha clattered into his manager after trying to keep the ball in play but his side were able to hold out for an important three points.

Rashica’s free-kick into the wall was the closest Norwich came to an equaliser despite a flurry of substitutions by Farke as the Canaries suffered an eighth league defeat of the term and were booed off.