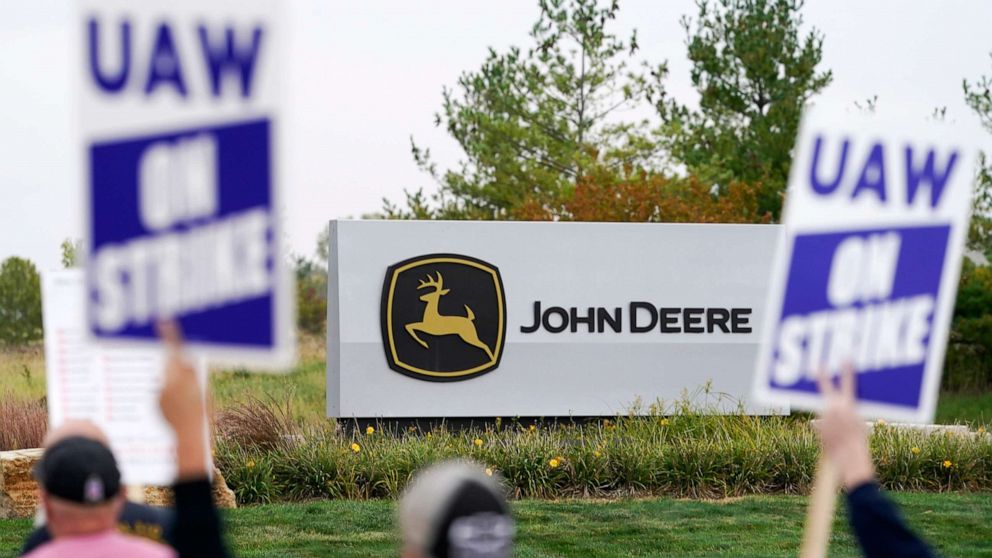 Members of the United Auto Workers Union are set to vote Tuesday on a tentative agreement that would end the ongoing strike of more than 10,000 John Deere workers.

News of the tentative deal, which would give approximately double the wage increase compared the previously rejected offer that kicked off the strike on Oct. 14, comes as unique labor market conditions have resulted in workers wielding new power as the pandemic wanes.

An apparent shortage of workers accepting low-wage jobs has left many major companies reeling for staff and has been linked to the spate of strikes that have rocked the private sector in recent weeks. The labor crunch — combined with recent record-high rates of people quitting their jobs and record-high job openings, per Bureau of Labor Statistics data — have resulted in workers gaining new leverage as they seek to bargain for better pay or working conditions.

UAW leadership and John Deere announced a tentative agreement had been reached between the union’s elected national bargaining team and officials at the agricultural machinery giant Saturday, but workers remain on strike until the ratification vote Tuesday.

The terms of the new agreement would guarantee a 10% wage increase for all union employees in the first year of the contract, and 5% each in the third and fifth year of the deal, as well as 3% lump sum payments in the second, fourth and fifth years of the deal, according to a contract breakdown document shared with ABC News by the union. Moreover, employees would receive a $8,500 ratification bonus.

There would also be improved retirement benefit options and no changes to the cost of their health insurance.

The UAW on Oct. 14 rejected a contract offer that would have offered a ratification bonus of $3,500 and immediate raises of 5% to 6%.

“Our UAW John Deere national bargaining team went back to our local members after the previous tentative agreement and canvassed the concerns and priorities of membership,” UAW President Ray Curry said in a statement announcing news of the new tentative agreement.

“We want to thank the UAW bargaining team and striking UAW members and their families for the sacrifices they have made to achieve these gains,” Curry added. “Our members have enjoyed the support of our communities and the entire labor movement nationwide as they have stood together in support and solidarity these past few weeks.”

The striking John Deere workers have received well-wishes and support from lawmakers and the public, as new employee activism during so-called “Striketober” has fueled momentum for the post-pandemic labor movement.

A GoFundMe set up to support the striking Deere workers has raised more than $135,000 from over 3,000 donors.

The first strike in more than three decades at John Deere comes after the company reported earning a record-high $4.68 billion during the first nine months of the 2021 fiscal year, more than double the $1.993 billion reported during the same time last year.

The recent bout of employee activism that has manifested in work stoppages and strikes in recent weeks comes after the shock of the COVID-19 pandemic that took an inordinate toll on workers deemed “essential,” but also after decades of soaring income inequality in the U.S., experts have said.

“I think workers have reached a tipping point,” Tim Schlittner, the communications director of the coalition of labor unions AFL-CIO, told ABC News last month shortly after the Deere strike commenced. “For too long they’ve been called essential, but treated as expendable, and workers have decided that enough is enough.”

Schlittner said the pandemic also exposed some deep “imbalances of power in the economy.”

“The pandemic has made clear what’s important and what’s not, and workers are looking at work in a new way, and demanding more of a return on their labor and demanding things like basic respect, dignity and safety on the job,” he said. “The pandemic has put on display for everyone to see how important workers are to this country, and you can’t call workers essential for 18 months and then treat them like crap when they all come back on the job.”