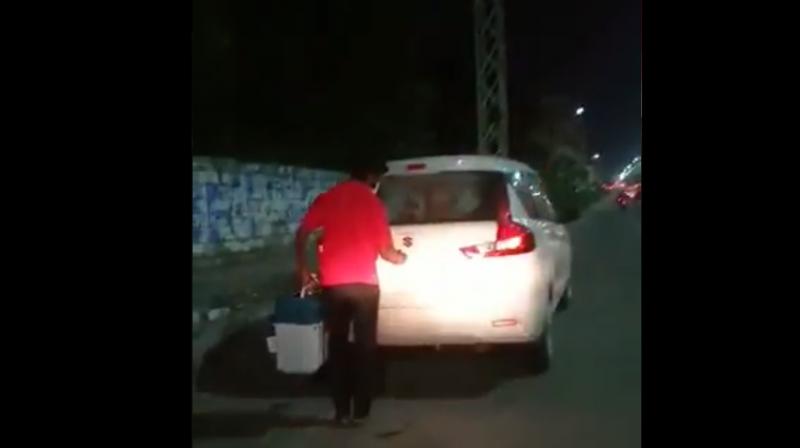 KARIMNAGAR: In a pattern that has become common after every election of late, a video of a man purportedly ‘exchanging’ EVMs and VVPAT machines of the Huzurabad Assembly byelection went viral on social media on Sunday. It led the BJP and Congress leaders to allege a ‘TRS conspiracy’ to defeat the Opposition candidates.

The video purported to show some electronic voting machines (EVMs) and Voter Variable Paper Audit Trail (VVPAT) machines being shifted to the SRR Degree College in Karimnagar in a private car, which led to suspicion and rumour-mongering all day.

Separately, a bus that was carrying the EVMs reportedly halted at the Jammikunta road for more than one-and-a-half hours, which also raised doubts in some quarters. When BJP and the Congress activists questioned the driver for stopping the bus, he reportedly said that a tyre had punctured.
It was alleged that a police patrol allegedly stopped the driver from speaking to the media.

Upon learning that some EVMs were being shifted in a private vehicle, Congress candidate Dr B. Venkat Narsing Rao rushed to the SRR College and stopped the vehicle and pulled up the police personnel for using private vehicles to shift the EVMs. He demanded that the Election Commission of India take immediate action against those responsible.

BJP state president Bandi Sanjay Kumar waded into the controversy, demanding an inquiry into the incident.

Goel and Ravinder Reddy spoke to the media and said that only EVMs and VVPATs which were not working were being shifted from the SRR College in a private vehicle to a godown nearby.

Some persons who shot a video of the transfer of the machines spread rumours that EVMs were being switched, the officials said.

It must be noted, however, that such incidents are highlighted by sections of the social media and Opposition parties after every election to allege that the polls have not been held in a fair and free manner.

In almost all cases it has been proved that the election officials have not erred, and that the sanctity of the poll process has been maintained.