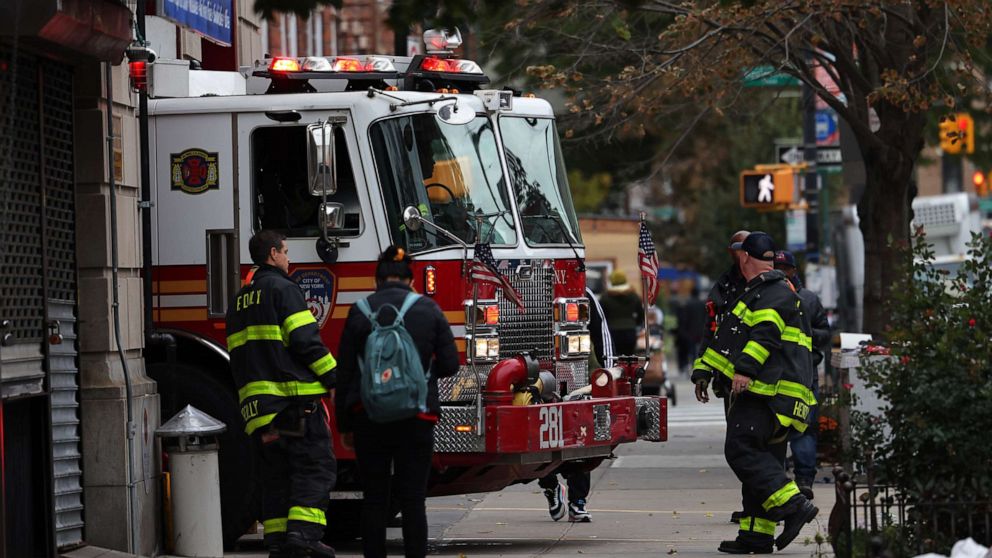 Four New York City firefighters have been suspended after driving their truck to a state senator’s office while on duty, asking for the politician’s home address and telling him the city would have “blood on its hands” over the city’s vaccine mandate.

The group, from Ladder 113 in Brooklyn, went to the office of state Sen. Zellnor Myrie in the company’s fire district in uniform and asked to speak to him, although as a state official he had no involvement in the city mandate from Mayor Bill de Blasio.

All city personnel, including firefighters, must have received at least one dose of the COVID-19 vaccine by the time they show up to work on Monday. Those who do not get vaccinated will be placed on unpaid leave.

The senator was not there at the time, but the firefighters spoke to a staff member.

“They said they wanted to let people in the community know that the trucks weren’t going to be running and that they were going to shut down firehouses,” a person familiar with the conversation told ABC News.

It was, the person said, a “cordial conversation” though at one point the firefighters said the “city would have blood on its hands.”

“I think it is highly inappropriate,” Myrie, a Democrat, said in an interview with New York ABC station WABC. “It is incredibly disturbing that those entrusted with keeping us safe would be on duty, protesting a vaccine mandate that had nothing to do with a state elected official. … My staff is rattled, they’re shaken up by it. And frankly, I am upset that we’re even having this conversation.”

The firefighters told the senator’s staff member they wanted the choice whether to get vaccinated and expressed a view that it would be safer for them to get tested every week.

“This is a highly inappropriate act by on duty members of this Department who should only be concerned with responding to emergencies and helping New Yorkers and not harassing an elected official and his staff,” Nigro said in a statement to ABC News. “The members in question have been immediately relieved of duty and will face disciplinary action.”

Myrie said he was satisfied with the firefighters being suspended, but that was only a first step.

“Instead of spending their time threatening elected officials and the communities that they represent, they should be focused on preventing and responding to emergencies,” Myrie said.

Firefighters are one of the lowest groups of vaccinated city workers in New York, though that number crept up during the final day before the deadline, with 77% of FDNY members vaccinated, including 72% of firefighters and 84% of EMS workers, as of Friday night.

About 84% of the New York Police Department is vaccinated, with 1,000 people getting their first doses on Thursday, according to Commissioner Dermot Shea.

Dozens of firefighters protested the vaccine mandate outside Gracie Mansion, where de Blasio lives, on Thursday. Uniformed Firefighters Association of Greater New York President Andrew Ansbro has warned of a “catastrophic manpower shortage” if the thousands of unvaccinated workers are placed on leave. De Blasio has repeatedly said contingency plans are in place and the city is not concerned about staffing problems.

Ansbro said Friday of the firefighters who went to Myrie’s office that they are not allowed to advocate for themselves while on duty.