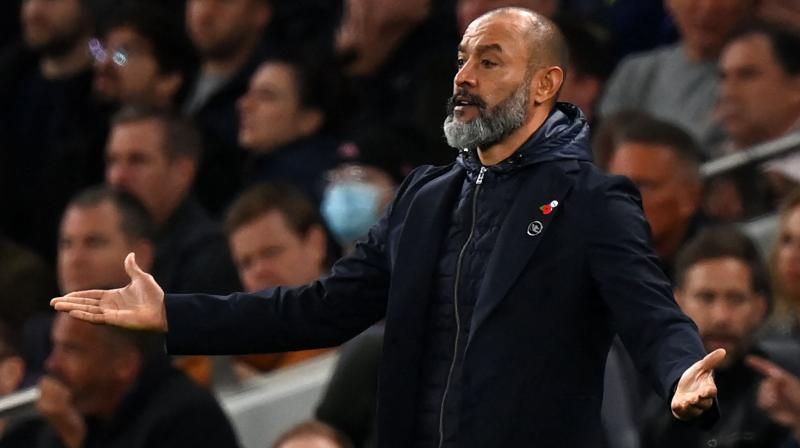 London: Tottenham fired manager Nuno Espírito Santo on Monday after losing half of his 10 Premier League matches in charge of the club.

The dismissal, after only four months in the job, followed a 3-0 home loss to Manchester United on Saturday when Nuno was booed and fans chanted You don't know what you're doing at the Portuguese coach.

In an increasingly volatile atmosphere, supporters also shouted We want Levy out" at chairman Daniel Levy, who has now decided change is required again after firing Jose Mourinho in April.

Tottenham is in eighth place in the Premier League, 10 points behind leader Chelsea and five points behind fourth-placed West Ham.

The club said Nuno and his coaching staff had been relieved of their duties" and that an update on the coaching will follow in due course," with no successor announced.

I know how much Nuno and his coaching staff wanted to succeed and I regret that we have had to take this decision," Tottenham managing director Fabio Paratici said.

Nuno is a true gentleman and will always be welcome here. We should like to thank him and his coaching staff and wish them well for the future.

A chaotic recruitment process in the offseason saw Levy try to re-hire Mauricio Pochettino and pursue Paulo Fonseca, Gennaro Gattuso and Antonio Conte before handing a two-year contract to Nuno.

The former Wolverhampton manager immediately had to grapple with the uncertainty over the future of Harry Kane, who was denied a move to Manchester City and has looked a shadow of the striker who was top scorer in the Premier League last season.

Kane's one goal in nine Premier League games and the failure to get a shot on target against United is reflective of Tottenham's malaise.

Nuno only managed the club for 17 games in all competitions.

While he was voted Premier League manager of the month after winning the first three games of the season in August, Tottenham has won only two of the seven games since then.

There has been progress in the League Cup to the quarterfinals but in the Europa Conference League Tottenham has won only one of three games.

The north London club qualified for Europe's new third-tier competition after finishing seventh in the Premier League, a far cry from the four consecutive top-four Champions League finishes from 2016-2019 under Pochettino.

The Argentine even reached the Champions League final in 2019 despite being unable to make any signings that season, missing out on the title to Liverpool. A poor start to the following season led to him being fired in November 2019 and he is now top of the French league with Paris Saint-Germain.

Tottenham is still struggling to reach the standards set by Pochettino, and reproduce the high-tempo attacking football to attract fans into its two-year-old stadium which increased the club's debt to 604.6 million pounds ($828 million) in its most recent financial report.