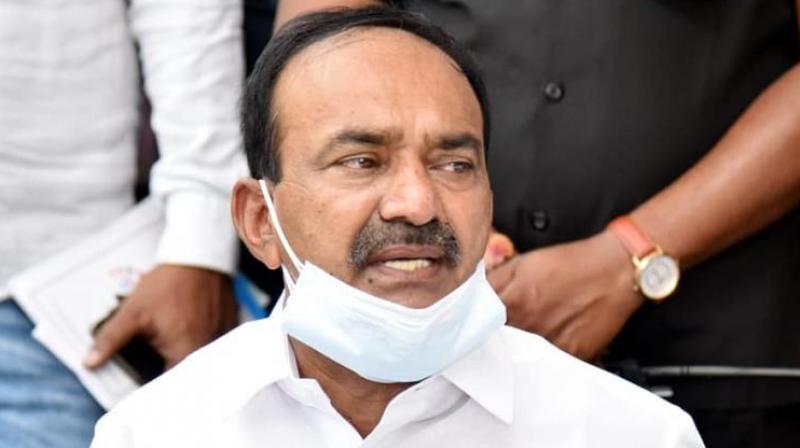 Karimnagar: Exchanging of ballot boxes is against democracy, said BJP candidate Etala Rajendar on Sunday, following reports that the Huzurabad byelection EVMs were switched when they were being carried to the strongroom at the SSR College here.

Rajendar alleged that the journey from Huzurabad, where the election took place, to Karimnagar lasts just one hour. But the buses in which ballot boxes were being shifted did not reach Karimnagar until 12 midnight though the polling ended hours earlier.

The explanation of the officials that only non-functional EVMs were being shifted in a private vehicle from the strongroom to another location raised doubts, Rajendar said.

Speaking to the media here, Rajendar alleged that the district administration had failed in preventing the TRS activists, who he claimed were involved in illegal activities for five months, from switching the EVMs.

He said that Chief Minister K. Chandrashekar Rao issuing a government order after the Huzurabad byelection notification was released was a blunder. TRS leaders had threatened the people saying that they will not get Dalit Bandhu, pension and other welfare schemes if they do not vote for the TRS, Rajendra said.

He said that the BJP had complained to collector R.V. Karnan and police commissioner V. Satyanarayana a number of times but in vain. “They behaved in a biased manner in support of the TRS,” Rajendar said.

“Such an election has never happened in India. Police escorted the vehicles carrying money and liquor to be distributed to the people. People gave security to the leaders who distributed money and liquor. MLAs themselves involved in distribution of money,” Rajendar alleged.