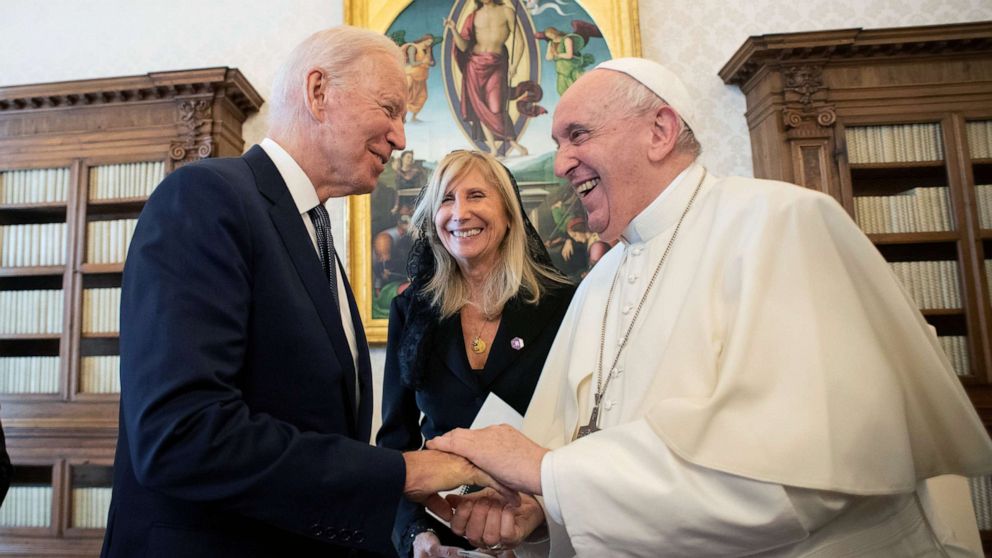 As President Joe Biden embarked on only his second overseas trip, he started with a personally poignant audience with Pope Francis on Friday, the first time in more than half a century that a Roman Catholic U.S. leader has met at the Vatican with the head of the Catholic Church.

Overshadowing the meeting was criticism from conservative U.S. bishops over Biden’s public, political position on abortion, some arguing Biden and other politicians who share his views should be denied Communion.

And at a later photo op with Italian Prime Minister Mario Draghi, when a reporter asked, “Did the issue of abortion come up at all?” Biden responded, “No, it didn’t. It came up — we just talked about the fact that he was happy I was a good Catholic and keep receiving Communion.”

“I happen to be a practicing Catholic and one of the things I like about my pope today is he’s all about renewal and forgiveness, that’s what that’s what he’s about. And I look forward to — I hope I get to see him in the not-too-distant future,” he said in September.

In a statement after Friday’s meeting, the White House said “President Biden thanked His Holiness for his advocacy for the world’s poor and those suffering from hunger, conflict, and persecution. He lauded Pope Francis’ leadership in fighting the climate crisis, as well as his advocacy to ensure the pandemic ends for everyone through vaccine sharing and an equitable global economic recovery.”

At one point, the two men exchanged gifts.

“I’m not sure this is appropriate, but, there is a tradition in America that the president has what is called a command coin that he gives to warriors and leaders, and you are the most significant warrior for peace I’ve ever met,” Biden can be heard explaining to Francis in edited footage released by the Vatican, as an interpreter shares the message with the pope. The Vatican did not allow U.S. news photographers inside.

Biden described the symbols on the coin, and the personal connection it has to his late son, Beau, telling Francis he knew Beau would want him to have it.

“It has the U.S. seal in the front. … I know my son would want me to give this to you because on the back of it, I have the state of Delaware in the 261st Unit my son served with,” Biden said.

“Wonderful,” Biden replied. When asked what they discussed, he answered, “A lot of personal things.”

This is not the first time the two have met. In fact, the pair have spent more time together than perhaps any previous U.S. president and pope — a distinction not lost on Shaun Casey, a senior fellow at Berkley Center for Religion, Peace, and World Affairs at Georgetown University.

“They’ve known each other for the entire papacy. And this will not be their first meeting, which I think makes it fairly unique in American presidential history, it may be even in papal history that these two guys know each other to a degree that no other analogous pair do.” said Casey, who served as a special representative for religion, and global affairs to Secretary of State John Kerry during the Obama administration.

“These guys know each other, and I think they’re comfortable with each other and they have a relationship that seems to be very warm and very genuine.”

Biden and the pope

As vice president, Biden attended Francis’ inauguration in 2013, and helped shepherd him during his visit in Washington in 2015, before once again meeting Francis at the Vatican in 2016 for a conference on regenerative medicine.

Francis’ visit to the United States was particularly touching for Biden, coming just a few months after the passing of his son, Beau, from glioblastoma, an aggressive form of brain cancer, that May.

“He asked to meet with the family in the hangar in the airport as he was leaving in Philly,” Biden recalled of Francis in an interview with CBS “Late Show” host Stephen Colbert last year.

“He came in. We had 16 family members there, and he didn’t just speak about Beau, he spoke in detail about Beau, about who he was and about family values and about forgiveness and about decency. I mean, he is — I am a great admirer of His Holiness, I really am,” Biden continued.

He keeps a photo of himself and Francis in the Oval Office.

Yet, Biden’s political views have sometimes put him at odds with the church on issues like gay marriage and abortion, issues that still divide him and Francis. Despite that, the two men share similar views when it comes to helping the poor, the need to address climate change and combatting the pandemic.

According to Casey, Francis places the church’s “pastoral” role above its “theological” one — an outlook that bonds him with the American president.

“Biden draws meaning and sustenance and healing from how the church has been with him during his grief over his long public career. And so in essence, there’s a pastoral bond there, in addition to the sort of social teachings bond that they share.

Francis is not the only pope Biden has met in his nearly 50 years in Washington. Biden also met with Pope Benedict XVI in 2011, and in 1980, the then-senator met for 45 minutes with Pope John Paul II.

“He kept kidding me about how young I am,” Biden told The Dialogue, the newspaper of the Wilmington, Delaware, diocese following the meeting.

Biden also recalled “discussions with the pope were relatively uninterrupted, even though several times during their conversation aides knocked on the library door, only to be waved away by John Paul.”

‘My religion defines who I am’

Biden is perhaps the most publicly religiously observant president the country has seen since Jimmy Carter. He attends Mass almost every weekend and on holy days of obligation, very often accompanied by family members, and wears Beau’s rosary beads on his wrist.

“My religion defines who I am,” Biden said during the 2012 vice presidential debate. “I’ve been a practicing Catholic my whole life. And it has particularly informed my social doctrine. Catholic social doctrine talks about taking care of those who — who can’t take care of themselves, people who need help.”

Biden attended Catholic school growing up in Scranton, Pennsylvania, and Claymont, Delaware, and has cited his faith as helping him to weather some major traumas in his life, including the death of his young wife and daughter in a 1972 traffic accident, and his son in 2015.

“I never miss Mass,” Biden said last August. “It is part of who I am. It’s what gets me through the very difficult times in my life, and I believe it very strongly.”

But even as he acknowledges the profound impact his religious devotion has had on his life, Biden largely deems his faith to be a “private matter” and not open for public discussion.

“I don’t proselytize. This is just a private thing with me and I feel very — my faith … means a great deal to me. And it’s been sort of my salvation,” Biden said in 2019.

But Biden’s private faith has become the subject of a major public debate during his presidency. The U.S. Conference of Catholic Bishops has criticized him for his stance on abortion, and voted to draft guidance on who should be able to receive the sacrament of the Holy Eucharist — the consecrated host Catholics believe is the Body of Christ.

Biden, who campaigned on codifying Roe v. Wade, and announced his opposition to the Hyde Amendment, which prevents the use of public funds for abortions, during the 2020 campaign, has drawn a line between his public and private views of the issue.

“My position is that I am personally opposed to abortion, but I don’t think I have a right to impose my view on the rest of society,” Biden wrote in his 2007 memoir.

That position has caused problems for Biden in the past. In 2019, Biden was denied Communion at a South Carolina Catholic church while campaigning for president.

“Any public figure who advocates for abortion places himself or herself outside of Church teaching. As a priest, it is my responsibility to minister to those souls entrusted to my care, and I must do so even in the most difficult situations. I will keep Mr. Biden in my prayers,” Rev. Robert Morey of St. Anthony’s Catholic Church in Florence, South Carolina, said in a statement.

For his part, Biden brushed off the incident as a one-off event, saying, “it’s not a position I’ve found anywhere else, including from the Holy Father who gives me Communion.”

A vote on the new guidance for Eucharistic eligibility, pushed by conservative bishops, is set to take place in mid-November, and would require support from two-thirds of the conference to be implemented, but the effort has not been received warmly by the Vatican.

Francis has made clear that Holy Communion is “not a prize for the perfect,” and does not believe in denying Communion.

“What must the pastor do?” Francis asked aboard the papal plane in September. “Be a pastor, don’t go condemning. Be a pastor, because he is a pastor also for the excommunicated.”

“The bishops here in the U.S. cannot miss the symbolism of the warm embrace of Joe Biden by Pope Francis,” Casey said of the visit.

Even if approved, implementation would be up to local bishops. The Archbishop of Washington, Cardinal Wilton Gregory, has also said he does not support denying Communion, as has Holy Trinity Catholic Church, which Biden attends in Washington.

“As a parish which has a long history of welcoming all, we concur with and support the pastoral approach of our Archbishop. Holy Trinity Catholic Church will not deny the Eucharist to persons presenting themselves to receive it,” the parish said in a statement.

When Biden was asked about the effort earlier this year, he simply replied, “That’s a private matter, and I don’t think that’s going to happen.”