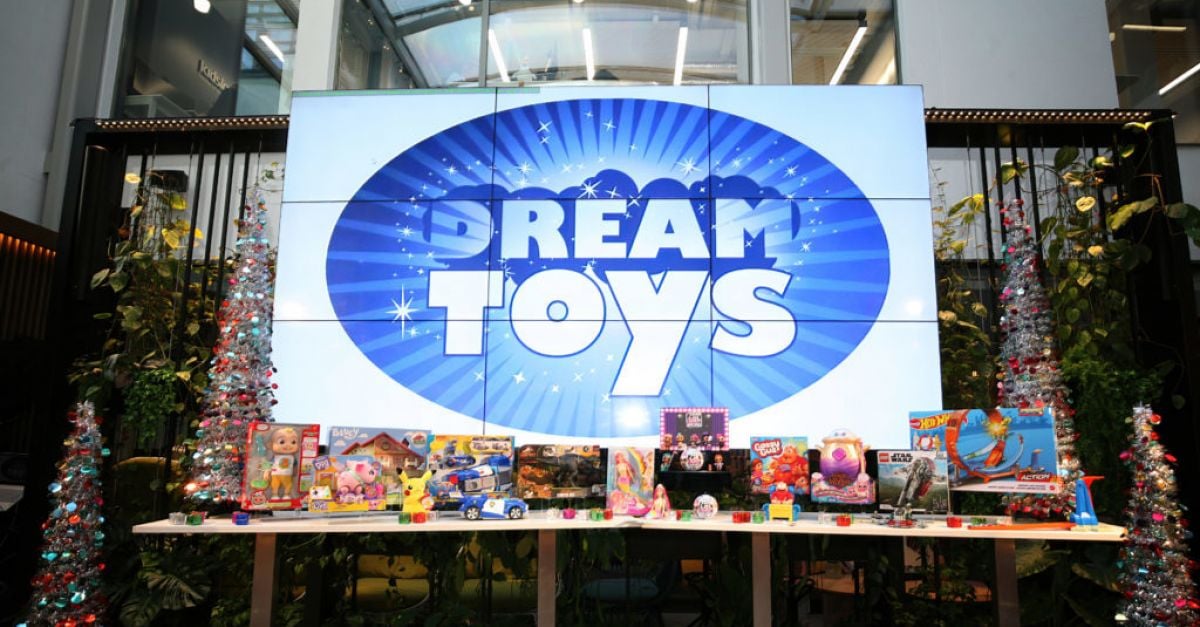 The official Dream Toys list has been announced by the Toy Retailers Association in the UK, rounding up all the most recommended playthings, just in time for Christmas. All the big names are in there, from Lego to Barbie, as well as some brand new and innovative creations sure to wow any child on December 25th.

And the good news is, the price points are really reasonable, so the perfect gifts don’t have to break the bank.

Here are the top 12 Dream Toys…

Why is it brilliant? It’s Barbie. And she’s always a popular choice. This particular one is a mermaid with rainbow hair and a colour-changing tail – dip her into hot water and her stripy tail fades to pastel shades, pop her in an ice-cold bath, and it returns to its vibrant original. Oh – and it’s available in two different skin tones, which is certainly a step in the right direction for diversity.

Who’s it for? Any Barbie fan- and this one is especially good for bath time.

Would we buy it? It’s not the most exciting Barbie, but kids will undoubtedly love the colour-changing mermaid tail. And toys that work in the bath always get extra brownie points.

Why is it brilliant? Bluey, for those who don’t know, is from the animated TV series on CBeebies and Disney+ and here, the Blue Heeler pup comes complete with his own home. Open-fronted, with 10 accessories like chairs and beds, little ones can play out scenes inside the house. The bottom half also shuts up, which will help with tidying up and keeping mess at bay.

Who’s it for? Aimed at children over three-years-old, fans of the show will enjoy bringing Bluey to life.

Would we buy it? Some may prefer their dolls’ houses to be made of wood and slightly prettier, but there’s an appeal for regular Bluey watchers.

Why is it brilliant? One of the best things about this toy is it’s a doll which is also a boy, and though that’s not unheard of, it is ridiculously rare. Big in size (think My Generation Doll), you can feed him food, undress and dress him, and he sings songs and makes a cute baby giggle sound.

Who’s it for? Aimed at children over the age of two, any little one who enjoys playing babies and role play will love this.

Would we buy it? It’s quite big and the songs will definitely get annoying, but in terms of equality in the doll world, it’s likely a lot more boys will want to play with this, so yes.

Why is it brilliant? The only game to make it into the top 12, Gassy Gus is a greedy man. Players take it in turns to feed Gus with a foodie card, each of which has a number on it. You then have to pump his head the number of times written on that card, which inflates his stomach. Once he gets full, he lets out a big fart and a chuckle, and whoever made him do that has to pick up cards. The first player to get rid of all their cards wins.

Who’s it for? Aimed at families aged four and upwards, it’s a quick and easy game to play, which will make little ones laugh.

Would we buy it? Not averse to it, if only to hear small people laughing their heads off at Gus’ farts, but it may have a relatively short shelf life in most homes.

Why is it brilliant? Anyone who’s experienced Hot Wheels gameplay knows how many hours can be wiled away seemingly doing the same thing over and over again. As the name suggests, this set forms a huge loop, which comes with a motor and a booster, to enable the biggest car smash-ups possible.

Who’s it for? Aimed at over fives, we suspect the perfect receiver of this set will be aged seven or eight, and their Christmas Day will be spent speeding round lots of loops.

Would we buy it? If you’re looking for something that will entertain for hours, without you necessarily having to get involved, this will certainly do the job, but it is big, so you’ll need plenty of space to set it up.

Why is it brilliant? It’s a large-scale realistic dinosaur action figure, which rex-loving kids can play with, while interacting with its moving parts. Press buttons to activate the roar, claw slash, tail whip and slash and grab attack.

Who’s it for? It’s aimed at children over the age of four, but we suspect slightly older kids will be more likely to engage in the less-cutesy action role play, though possibly not anyone old enough to see the Jurassic World films.

Would we buy it? Probably not. The dinosaur fans in our lives might like this, but it doesn’t have much buyer satisfaction.

Why is it brilliant? The latest LOL range is somewhat sophisticated. The ‘movie magic’ theme definitely adds a touch of class. Encased in small round balls, each LOL doll comes with 10 surprises, including a secret message, 3D glasses, a fashion outfit and a movie script.

Who’s it for? Any LOL fans will love this. Perfect for Christmas stockings, the outfits and diverse skin tones get a big tick from us.

Would we buy it? Definitely. A great price and a lovely gift.

Why is it brilliant? In case we haven’t bought enough pets during lockdown, Piggly is keen to become a member of your family. Feed, walk and nuzzle the pig while it squeals and snorts, playing over 25 sounds and reactions. And it has a very cute little trot.

Who’s it for? Aimed at children over the age of four, any little one who fancies a pretend pet of their own will love this.

Would we buy it? The music that plays while it walks is slightly annoying and the squeal is really quite loud, so on that basis, probably not. It would be a well-loved, but quite annoying, toy to have in the house.

Why is it brilliant? If you’re looking for the wow factor, this is it. We would prefer the cauldron to be a little less plasticky, but the idea of mixing a potion, with which you create a magical creature (or soft toy) from, is only going to be a huge success. Genuinely spellbinding, kids will adore the process (which can be used again with refill packs). A sure-fire hit this Christmas.

Who’s it for? Any child between the age of five and eight will absolutely love this.

Would we buy it? It is expensive, which might make you think twice, but it is an absolutely brilliant gift.

Why is it brilliant? Paw Patrol is still going strong and fans of the show would happily own all the paraphernalia. Featuring Chase the dog, kids can push the car’s spoiler to armour up his Deluxe Vehicle, revealing a projectile launcher at the back, which shoots discs at the press of a button.

Who’s it for? Paw Patrol fans aged three and over.

Would we buy it? More plastic cars aren’t really high on the wishlist this year, but there’s no doubt show lovers will be delighted with it.

Why is it brilliant? Pikachu is always our favourite Pokemon character and this soft toy is made from super soft fabrics, which are perfect for cuddles and bedtime.

Who’s it for? Suitable for kids over two, it’s a stocking filler for Pokemon fans.

Would we buy it? No sadly, unless you love Pokemon enough to splurge on a small teddy.

Why is it brilliant? You won’t find many people who don’t think Lego is brilliant, and this set, based on the Mandalorian series, won’t disappoint. Containing 593 pieces, this detailed version of Boba Fett’s Starship comes with stud shooters, rotating dual blaster cannons, Boba Fett and The Mandalorian LEGO mini-figures with weapons, a Carbonite brick and a transporter vehicle.

Who’s it for? Step-by-step instructions mean kids of all ages can get involved, but it is a trickier build aimed at nine-year-olds and over.