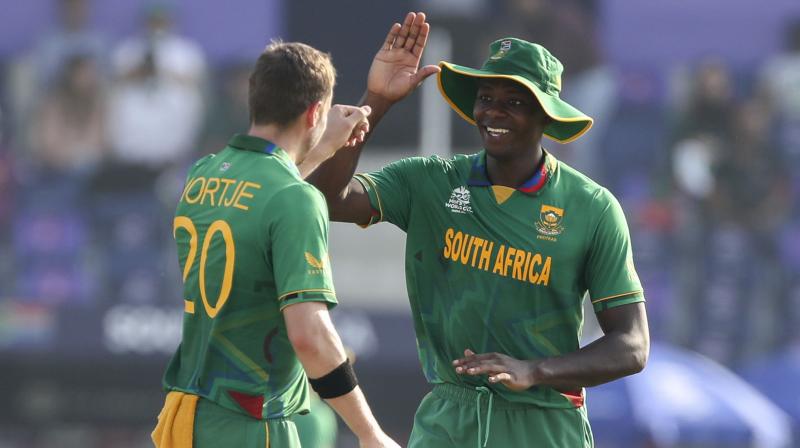 South Africa skittled out a struggling Bangladesh for 84 in 18.2 overs and then knocked off their target in 13.3 overs to consolidate their second position in Group 1.

With three wins from four matches, South Africa now have a match left against in-form table toppers and unbeaten England on November 6.

Already down and out, Bangladeshi batters were at sea against a disciplined South African attack, which was not only consistent with its teasing line and length but also got the ball to jump off good length.

Rabada's (3/20) first spell in which he scalped three batters, including two in two balls, was instrumental in the slide of Bangladesh, who were playing without star-all rounder Shakib Al Hasan.

Had it not been for Mahedi Hasan's 27-run cameo, Bangladesh would not have even crossed the 80-run mark.

However, skipper Temba Bavuma (31 not out) and Rassie van der Dussen (22) steadied the innings, having taken some time to get the measure of the pitch which was assisting the fast bowlers.

Eventually Bavuma got the job done in the company of David Miller (5 not out), who finished the match in style, with a four off Mahedi Hasan.

Earlier, spinner Keshav Maharaj and Rabada were terrific with their line and length when they opened the attack. They did not let either Liton Das (24) or Mohammad Naim free their arms.

When Naim (9) tried to break the shackles, the left-hander ended up giving a simple catch to Reeza Hendricks at mid-wicket, off Rabada.

The young pacer trapped Soumya Sarkar (0) in the next ball which brought Mushfiqur Rahim to the crease.

Rahim survived the hat-trick ball but went back without scoring after facing three balls, when he could not handle the bounce that Rabada got off the surface, and edged one to Hendricks at gully.

Nortje also kept the Bangladesh batters on a tight leash, which meant that the South Africans completely dominated the power play overs, conceding only two boundaries in 28 runs.

Nortje, too, got the ball to jump off the track and skipper Mahmudullah (3), who could not handle the bounce, edged it straight to Aiden Markram at point.

Dwaine Pretorious joined the party when he castled Afif Hossain (0) to leave Bangladesh tottering at 34 for five. From there the slide just continued for Bangladesh.