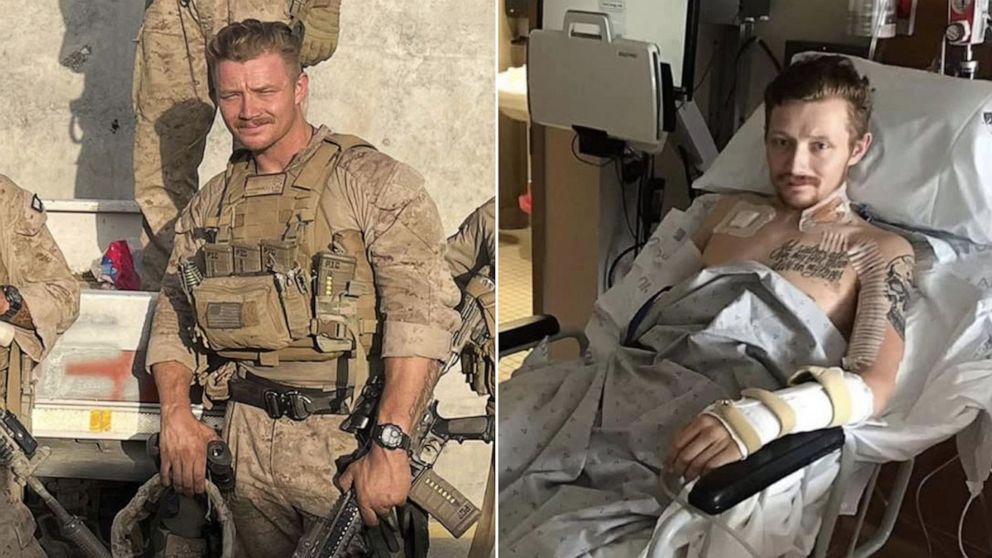 There was a sense of danger and urgency in the air at Hamid Karzai International Airport on the evening of Aug. 26. Sixteen hours earlier, the U.S. Embassy had warned American citizens to stay away from the airport, and intelligence suggested an attack could be imminent.

But Marine Sgt. Tyler Vargas-Andrews had decided to use his down time from his sniper team’s overwatch position at Hamid Karzai International Airport to help get Afghans inside to safety and eventual evacuation from a country taken over by the resurgent Taliban.

A fellow serviceman and friend of Vargas-Andrews was walking toward Abbey Gate, along the southeast edge of the airport, to meet up with him when an ISIS-K terrorist detonated his suicide vest, killing 13 U.S. troops and nearly 170 Afghan civilians.

“It knocked me to the ground,” the friend, who asked not to be named, told ABC News. “I got up and turned around, and then I see the plume of smoke behind me.”

Looking toward the gate he saw a Marine engulfed in flames being pushed to the ground and rolled. He saw another running in his direction, covered in blood, calling for a corpsman. Eventually, among the casualties, he saw Vargas-Andrews.

His friend was alive.

Though he survived, Vargas-Andrews lost his entire left leg and his right arm just above the elbow. He was first moved to Germany for treatment, and later to the esteemed Walter Reed National Military Medical Center in Bethesda, Maryland, where he continues to receive “emergency medical care,” according to the family.

The 23-year-old Marine made his first public statement since the attack on social media earlier this month, posted along with a photo from his hospital chair.

“Let me start by saying that these past almost 2 months have indeed been hard. I have been trying to figure out what I want to say and how to say it. The outpouring of support from friends, family, organizations, and even just complete strangers has been unreal. I won’t ever be able to thank everyone enough, but still, thank you,” Vargas-Andrews wrote.

In a particularly wrenching segment of his statement, Vargas-Andrews expressed his difficulty in sharing the recent picture.

“I hate the way I look right now and I’m working mentally on coming to terms with loss of my right arm and my left leg,” he wrote.

Putting aside the hospital setting and obvious injuries, Vargas-Andrews looks like a model infantry Marine — tattooed, fit, with a well-manicured mustache and full coif of hair. Only when compared to older images does the extent of the change become evident.

A video shot at a gym in Saudi Arabia two weeks before the bombing shows Vargas-Andrews deadlifting 530 pounds — arms, shoulders, chest bulging from his tank top.

“Laying in bed for almost 2 months has caused me to lose everything I had worked for physically,” he wrote.

Vargas-Andrews has undergone 29 surgeries so far, “with numerous more ahead,” according to a family statement given to ABC News.

“His recovery efforts include extensive physical therapy and will take many years,” the statement said.

Despite all this, Vargas-Andrews conveys a remarkably dogged, even humorous tone.

“Some days are better than others, but you best believe I will still strive to be the best version of myself regardless of these injuries. I just have new challenges now and physically am a different person, but I’ll see how far I can go with this new body haha,” Vargas-Andrews wrote.

And he’ll have help throughout his recovery.

“He’s as tough as they come,” said Faun O’Neel, who runs a military and first responder support organization called Warfighter Overwatch with her husband, Danny.

The nonprofit has raised more than $25,000 to directly support Tyler and his family, according to O’Neel. A GoFundMe campaign created by members of Tyler’s unit has itself garnered more than $360,000 for the family.

Vargas-Andrews is the last of the Marines injured in the Kabul suicide blast still at Walter Reed, which is far from both his hometown of Folsom, California, and his former duty station with 2nd Battalion, 1st Marines, at Camp Pendleton.

Visits and calls from comrades help stave off loneliness, and Warfighter Overwatch has helped connect the family with the Yellow Ribbon Fund, which has rented an apartment just across from the hospital for his mother, an attorney in Folsom, as long as she needs it.

Warfighter Overwatch has also paired with Folsom-based Design Shop to renovate the family home to make it as comfortable as possible for his eventual return, O’Neel said.

Given the extent of his injuries, Vargas-Andrews could be at Walter Reed for years.

But the last thing Vargas-Andrews wants is pity, according to the friend who was walking to meet him when the bomb detonated in August. Based on recent phone calls to Walter Reed, Vargas-Andrews sounds like a much better source of inspiration than pity.

“When we talked to him he was already like, ‘Yeah, man, I only got about a year and then I can start lifting again,'” the friend said.