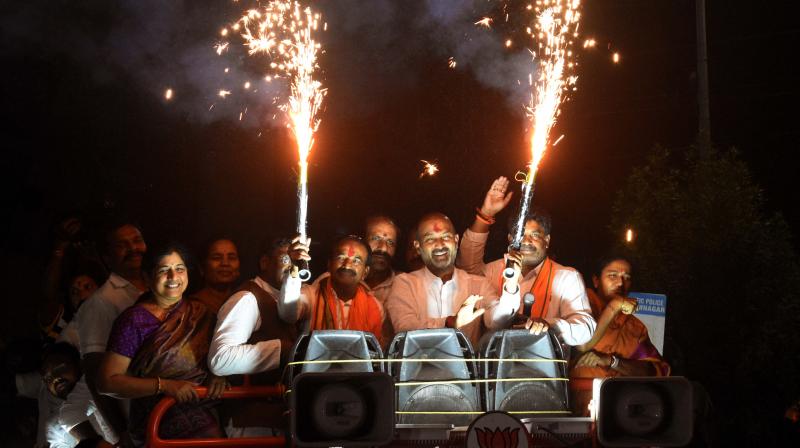 Hyderabad/Karimnagar: In a major jolt to the ruling Telangana Rashtra Samiti (TRS), the opposition Bharatiya Janata Party wrested the Huzurabad Assembly seat in the fiercely contested bypoll on Tuesday.

BJP candidate Etala Rajendar scripted history by trouncing Gellu Srinivas Yadav of the TRS by 24,109 votes including 242 postal ballots in the bypoll that was viewed as a battle of prestige between TRS president and Chief Minister K. Chandrashekar Rao and Rajendar.

Rajendar created a record by winning for the consecutive seventh term as MLA. He won six times as TRS candidate from 2004 to 2018 and now as a BJP candidate.

Rajendar, who quit the TRS and joined the BJP in June after being dropped from the state Cabinet by Chandrashekar Rao in May over allegations of land grabbing, proved that his personal hold on Huzurabad is more than that of the TRS.

Rajendar, whose resignation from the Assembly in June caused the bypoll, secured a total of 1,06,782 votes while Yadav polled 82,712 votes. The Congress suffered humiliation as its candidate finished a distant third with just 3,012 votes.
Speaking to media personnel after his stupendous victory, Rajendar said the people had given a big slap on the face of Chandrasekhar Rao and saved democracy in the state.

Rajendar said, "People along with me faced a lot of problems for the past five months. The TRS exerted pressure on all sections of people by misusing its political power through police force. People were afraid to move freely in the constituency because of the situations that were created by the TRS. They even entered into the houses of some BJP men and my followers and tried to threaten them."

Rajendar dominated the counting held over 22 rounds. He took lead in the very first round of counting and did not look back later except for the 8th and 11th rounds, when the TRS candidate took a minor lead.

Chandrashekar Rao had gone all out to defeat Rajendar and camped dozens of ministers, dozens of party MLAs, MLCs, MPs and senior leaders for six months in Huzurabad from May to October.

The TRS government sanctioned Rs 2,000 crore to Dalit Bandhu in Huzurabad and another Rs 2,000 crore for various development programmes to lure voters. Despite all these, Rajendar emerged victorious.

Rajendar, who was first elected from erstwhile Kamalapur constituency (now Huzurabad) on TRS ticket in 2004 and retained it in the by-election in 2006, won from Huzurabad in 2009 and since then he had been winning the seat for the TRS.

One of the founding members of the TRS, Rajendar maintained his grip on the constituency since 2004. Continuing his winning streak in 2018, he defeated his nearest rival Kaushik Reddy of Congress by 47,803 votes. Rajender had then polled 1,04,840 votes while Kaushik Reddy had secured 61,121 votes.

Though Kaushik Reddy switched over to the TRS a few months before the bypoll, the outcome showed he could not ensure transfer of votes to the ruling party. With the victory in Huzurabad, the BJP’s strength in 119-member Assembly rose to three. Huzurabad is the second Assembly seat wrested by the saffron party from the TRS in the last one year. In November last year, the BJP had wrested Dubbak seat by a thin margin.

Of the five mandals in Huzurabad, it is the Kamalapur mandal which gave the maximum majority of  9,450 to Rajender followed by Jammikunta mandal and helped him to register a massive victory in the much hyped by-election.

But for the first time, the TRS candidate Srinivas Yadav took the lead over Rajendar in his native mandal Veenavanka in the eighth round by 262 votes. The round included the Himmatnagar village from the native place of Srinivas Yadav.
In Jammikunta mandal, the TRS  expected to gain at least half the votes. It secured 385 votes more in Jammikunta Rural mandal in the 11th round. But in the later rounds the

BJP secured a clear majority in Jammikunta and dashed their hopes.
For the total 44,730 turnout of voters in Jammikunta mandal, BJP secured 23,779 votes and TRS secured 17,987 votes. Rajendar secured 5,792 votes majority over the TRS  in Huzurabad mandal.