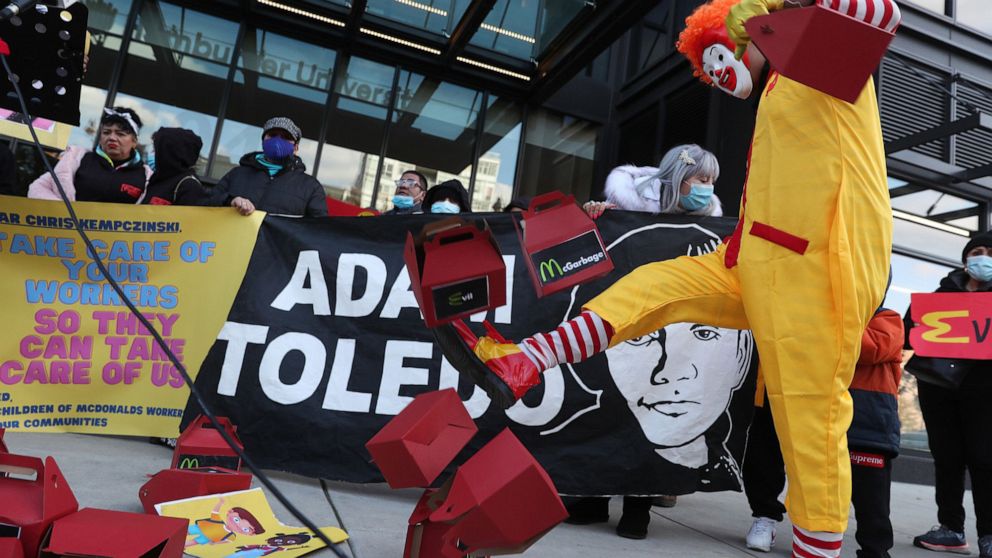 Protests erupted at McDonald’s headquarters in Chicago this week after a text exchange between the fast food giant’s chief executive and Mayor Lori Lightfoot seemed to blame the parents of two children who were recently shot to death in the city.

Lightfoot had visited McDonald’s headquarters and met with CEO Chris Kempczinski in April, the day after the fatal shooting of 7-year-old Jaslyn Adams, who died in a hail of bullets fired into her family’s car that was in a McDonald’s drive-thru lane. The child’s death came as the city was still mourning and outraged over the fatal shooting of 13-year-old Adam Toledo by a police officer.

In a text exchange recently made public, Kempczinski wrote to Lightfoot: “With both, the parents failed those kids, which I know is something you can’t say. Even harder to fix,” according to ABC Chicago station WLS-TV.

The comment sparked immediate backlash and accusations of racism and victim blaming.

Images shared to social media by the labor advocacy group Fight for 15 Chicago, which helped organize a protest on Wednesday, showed crowds of protestors descending on McDonald’s headquarters. Many of those marching were children.

“As the leader of the largest fast food corporation, Mr. Kempczinski has a responsibility to do much better for Black and Brown communities than add on to racist stereotypes,” Fight for 15 Chicago said in a Tweet.

Kempczinski acknowledged the text exchange in a note sent to McDonald’s U.S. corporate employees, which was viewed by ABC News.

“In the text exchange, I thanked Mayor Lightfoot for the visit and reflected on our conversation about the recent tragedies, commenting that ‘the parents failed those kids,'” the CEO wrote. “When I wrote this, I was thinking through my lens as a parent and reacted viscerally.”

“But I have not walked in the shoes of Adam’s or Jaslyn’s family and so many others who are facing a very different reality,” Kempczinski added. “Not taking the time to think about this from their viewpoint was wrong, and lacked the empathy and compassion I feel for these families. This is a lesson that I will carry with me.”

Kempczinksi lamented the “senseless surge in gun violence that is affecting so many children,” adding that, “it is also clear to me that everyone has a role to play.”

“Quite simply, it is on all of us to do better for the children of our communities,” the CEO stated, saying he was committed to working with civic leaders and elected officials to “understand what that means for McDonald’s.”

Lightfoot did not immediately respond to ABC News’ request for comment Thursday, but a spokesperson for the mayor told told WLS-TV: “Victim shaming has no place in this conversation.”