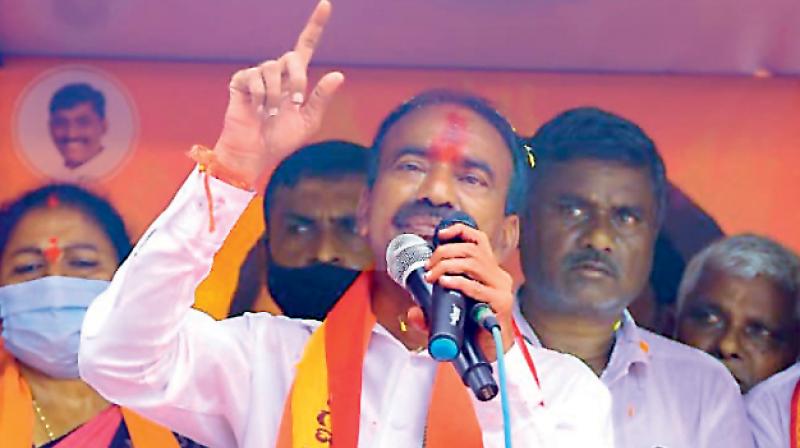 Karimnagar: Former minister and BJP candidate Etala Rajendar created history by winning his seventh Assembly election in a row with the thumping majority from Huzurabad.

Rajendar won with a margin of 24,312 votes including 242 postal votes.
The counting of votes for every round created high tension among leaders of the BJP and the TRS in the first session at the SRR Degree and PG College on Tuesday.

The officials arranged two counting halls with seven tables in each. Counting was held by opening 14 ballot boxes at a time, seven in each hall.

The exercise began at 8 in the morning and officials first counted postal votes where the TRS led with 455 votes against 242 to the BJP and two to the Congress. Forty-eight postal votes were rejected.

The counting from EVMs in the first session started slowly but gained momentum after lunch. Eight rounds were completed before lunch at 1.30 pm. At that time, the BJP had a 3,188-vote lead.

After lunch, the counting of votes was carried out in the remaining 14 rounds, during which Rajendar ran away with the election, securing a lead of 20,882 votes in the evening rounds over TRS candidate Gellu Srinivas Yadav.