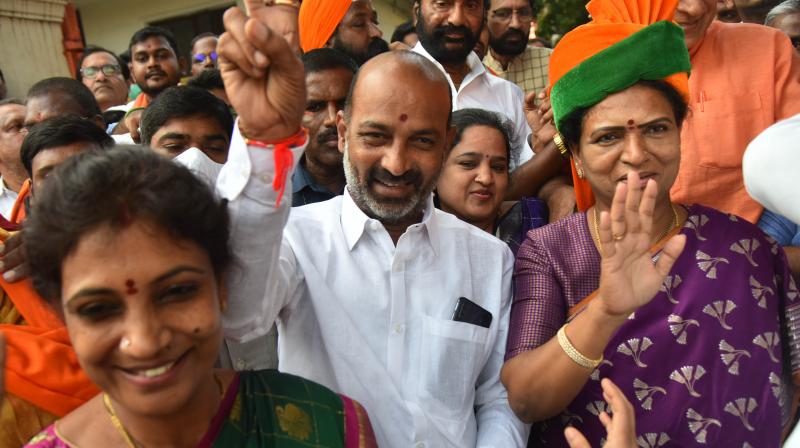 Hyderabad: Despite being one of the most hyped, prolonged, expensive and bitterly fought byelections in years in Telugu states, and the first-of-its-kind in separate Telangana’s seven years of existence, Huzurabad would not have any major direct political impact on the state’s politics.

For the Bharatiya Janata Party (BJP), the big win will hardly catalyse its growth or rise, or even its emergence as the numero uno rival to the ruling Telangana Rashtra Samiti (TRS). The benefits of the victory are going to be largely psychological, and fall short of being only slogan-eseque.

With a triple-R (Rajendar, Raghunandan Rao and Raja Singh) MLA team ready for the next Assembly session, the BJP comes closer to showcasing itself to being a party of strength in Telangana – the second state it so badly yearns to win in south India, after Karnataka. But the bypoll win will not lead to a cascading impact – there will be no resignations by MLAs of the ruling TRS and the government is powerfully, and stably, perched for the next two years.

The mojo is surely back with the saffron outfit, and energised to its acme in the state, an unmistakable trend which lends to the perception that the BJP finally means business in Telangana – a transformation brought in by the leadership of state president Bandi Sanjay Kumar.

Despite the definite blip after hitting the nadir and exposing its organisational weakness during the Nagarjunsagar bypolls, and a loss in the graduate’s constituency MLC polls, especially a sitting seat – the Huzurabad bypoll win gives BJP a visceral confidence, seeming as it does as a continuing run without a break – Dubbak, GHMC and Huzurabad. But the benefits hardly extend beyond.

The BJP would most certainly benefit from the rich experience and knowledge of Rajendar. He could prove immensely useful in its long journey ahead to build the party in various districts from the grassroots upwards. The TRS will see some attrition but that would come far closer to the next Assembly elections and two years is an aeon in politics.

The party can take the single largest takeaway of a reinvigorated narrative and go back to the people to establish itself as the true alternative and rival of the TRS.

Surprisingly, the polls do not impact the Congress badly either. Despite the fury of the intra-party maelstrom aimed at questioning the efficacy of the leadership of A. Revanth Reddy, it will hardly matter and would soon be forgotten. The newly crowned PCC president was plain unlucky that the first election the party was forced to fight under his leadership was one in which they were irrelevant – the fight in Huzurabad had long prior become dubbed as a war between the wrongly terminated minister Etala and Chief Minister K. Chandrashekar Rao.

Revanth Reddy, in fact, would love the air of anti-TRS and a strong mood against the government and ruling party; and would believe that minus the extraordinary conditions of Huzurabad, the Congress is better placed to exploit it than the BJP across the state.

As counterfactuals go, in fact had the Congress fought the election more effectively, and strongly, it would have ended with an overall worse result – a TRS win and further solidification of the seeming invincibility of the TRS under the leadership of Chandrashekar Rao.

For the ruling party and the government, with no threat to its government, no possibility of attrition, or even a murmur of dissent from the leaders within, nothing changes. Except possibly as a signal to course correct.

A larger lesson exists, however, for all political parties and leaders – there is an outer limit to the impact of money on an election, and distribution of huge monies directly to purchase a vote could be counterproductive. People do not like bad economic outcomes, seek better governance, and dislike corruption but the biggest political vice, one punished ruthlessly by the electorate, is hubris.

If the TRS course corrects its governance and political approach, if the BJP continues to strengthening itself and showcasing the failures of the government, and the Congress marches ahead with its politics of fanning dissent and voicing discontent of people – all three possible outcomes of Huzurabad – it is good for the people, and the state.

The only thing certain after Huzurabad is that the three parties will face off again, and the battle will be intense and fierce, and the outcome could be anything.