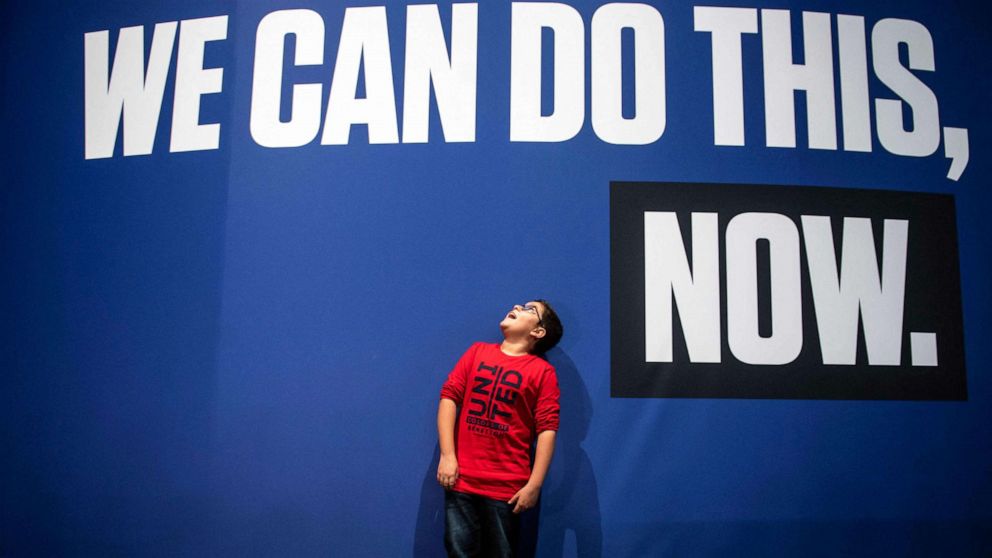 “If I had something to say to our leaders, it would definitely be, ‘Take responsibility, not only of your actions but of your position,'” 18-year-old Mexican climate activist Camila Gonzalez told ABC News.

“We have left our future in your hands and for you to actually fix something, you have to be held accountable,” she continued.

When asked if she felt young people’s voices were being heard, Gonzalez shook her head no.

“We are definitely not only not given a voice, but not even a vote,” she continued. “At the end of the day, our representation here is purely tokenistic.”

Warning that their generation would be the ones living with the consequences of climate change, the young activists advised world leaders at the conference to listen to them since they will eventually be the ones coming up with solutions.

“I feel like we should be at the center of the negotiations because all the decisions that are made around us, we are the ones that are supposed to come up with innovations,” 27-year-old Zimbabwe native Jean-Bertrand Mhandu said.

The activists also spoke to the added disadvantage of ageism in the climate action space and the limited access to funding compared to older people.

“I am young, not stupid. I can understand all of this,” Eric Njuguna, 19, from Kenya, told ABC News. “It’s just that it’s deliberately exclusionary.”

Often dismissed because of their young age, these activists also complained about being further marginalized because of where they are from.

“COP26, as I have experienced, has been deliberately exclusionary, especially for people in the global south,” Njugana said. “Our voices need to be on the table because our voices bear the reality of what the climate crisis means to us.”

Colombia native Sofia Gutierrez, 19, shared similar sentiments, telling ABC News, “They need to start using their power in the correct way because right now, they’re using it to spill blood in countries like mine.”

Hailing from Barbados, which has an insignificant contribution to world carbon emissions levels, 22-year-old Ashley Lashley asserted that developed nations need to set more ambitious targets to offset the disproportionate ill effects on small island countries like her own.

“Every day we’re seeing dramatic changes to our environment and our children’s education are severely compromised as a result of the natural disaster which we’re encountering on a daily basis,” Lashley told ABC News.

On the issue of developing nations paying the cost while sharing the blame with developed countries for their overreliance on coal, Mhandu suggested turning to Indigenous knowledge sources and communities that have learned to live in harmony with nature.

“At the end of the day, this is a global issue, and global issues require global solutions,” Gonzalez added. “That includes sharing the knowledge that we already have — traditional practices, traditional knowledge.”

Calling for the decolonization of knowledge systems, Njugana campaigned for the recognition of Indigenous knowledge as a system akin to Western counterparts.

“We need to recognize lived experience as expertise because that is knowledge too,” Njugana said.

Mhandu also pointed out that the skill lacking in most leaders is leadership.

“They have forgotten how to be leaders,” Mhandu told ABC News. “They are decision-makers, but they are not listening to people who have Indigenous knowledge. We have the ideation aspects of making decisions and the prototypes that they can use in implementing their projects.”

The young adults criticized world leaders for their detached approach to climate change and called out the cognitive dissonance between their promises and actions.

“Connect to these stories and make the right decisions because there’s a huge disconnect between what world leaders are saying right now and the commitments that need to be made in order to limit a global temperature rise of 1.5 degrees [Celsius],” Njuguna added.

Evelyn Acham, a 30-year-old activist from Uganda, told ABC News in her message to world leaders that “money is going to be useless on a dead planet.”

“You continue putting profits above the people on the planet, but we cannot eat money,” she said. “Communities and communities are already experiencing some of the worst impacts of the climate crisis. And yet you continue to invest in destroying our future industry in fossil fuels.”

They also emphasized the urgency of climate solutions to address the accelerated climate crisis.

“As much as we’re talking about emissions reductions by 2050, 2030 — things are happening today,” 24-year-old Jon Bonifacio from the Philippines told ABC News. “Typhoons are impacting places like the Philippines causing unprecedented situations. So it’s really about acting now and delivering on promises such as reparations and obligatory support from the global north to the most impacted areas in the world.”

Many young people who gathered at the Fridays for Future protest told ABC News they didn’t trust leaders to create real change, but that being there with other young people fighting for action made them hopeful.

Branding COP26 a “failure,” Fridays for Future figurehead Greta Thunberg, 18, said, “Many are asking what it’ll take for people in power to wake up. But let’s be clear, they’re already awake.”

“The leaders are not doing nothing. They are actively creating loopholes and shaping frameworks to benefit themselves and to continue profiting from this destructive system,” Thunberg told a crowd of protesters in Glasgow, Scotland, on Friday.

These young activists don’t just serve as warnings of a bleak future but also as optimistic signs of possible environmental action.

“Don’t give up in this fight against climate change,” 29-year-old Arturo Salazar from Peru said, addressing children across the world. “The future is ours and we have to keep moving the car and the message.”