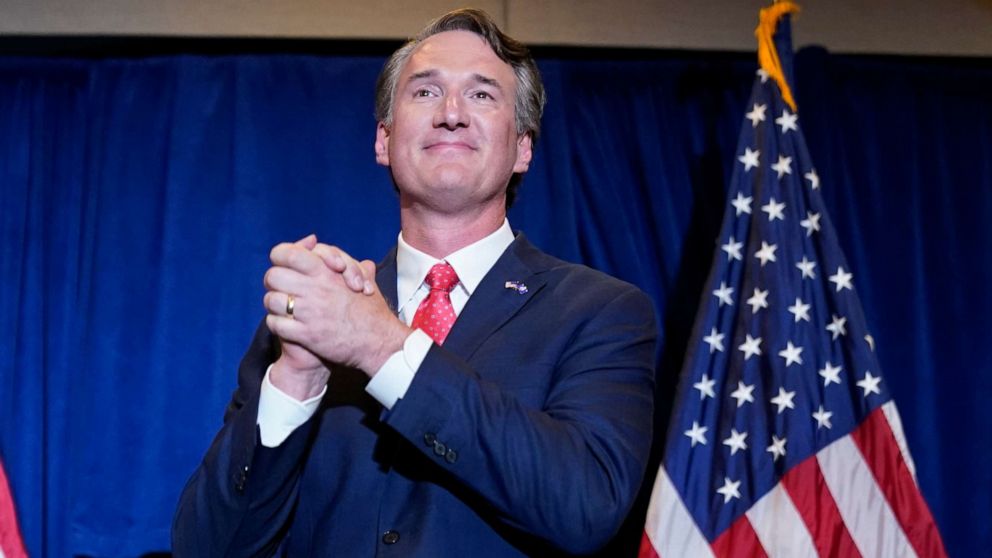 The Trump era was defined by political extremes — most often by former President Donald Trump, who engaged and also enraged enough for Democrats to win the House and then the presidency and the Senate.

The most closely watched election since Trump left office, though, came down to moms and dads in the suburbs who probably didn’t vote for Trump and weren’t thinking all that much about him when their kids went back to school this fall.

That’s a worrisome sign for Democrats, who will be left explaining how a state President Joe Biden carried by 10 points just elected a Republican to serve as governor, for the first time in a dozen years, while the race in an even bluer state comes down to the wire.

Democrats wanted to talk about Trump in the governor’s race in Virginia, rightly noting his continued dominance inside the GOP. But Republican candidate Glenn Youngkin preferred to talk about inflation, school safety, COVID mandates and parents’ control of curriculum.

He employed plenty of right-wing buzzwords, some of them racially tinged — his vow to ban “critical race theory” ignored the fact that no such thing is part of the state’s public-school curriculum — but he weaved around efforts to tie him to Trump.

It seemed to work at the important margins: Youngkin effectively flipped the suburbs en route to victory, carrying that subset of voters by a margin of 53-47, according to exit polls. Biden carried those same suburbs 53-45 a year ago.

All four Virginia counties that Biden took after Trump carried them in 2016 were favoring Youngkin as of early Wednesday. McAuliffe, meanwhile, was falling short of Biden’s margins across the suburbs of Washington, D.C., and Richmond, and in virtually all corners of the state.

The other state with a governor’s race on Tuesday, New Jersey, didn’t have exit polls, but similar trends are emerging out of that race based on electoral geography. Democratic Gov. Phil Murphy was locked in a close contest with Republican Jack Ciattarelli as of Wednesday morning, but ABC News had not yet made a projection in that race.

In Virginia, voters of color seem to have voted for Democrat Terry McAuliffe in numbers similar to their support for Biden, though it appears as if McAuliffe didn’t turn out as many Black or Latino voters. That hints at an enthusiasm gap for Democrats that has widened as Biden’s standing in polls has dipped in recent months.

It didn’t help McAuliffe that he brought his own baggage to the race, accumulated over four years as governor and decades as a political insider. But being a self-described “Biden Democrat” proved to be a difficult sell, with the president’s approval rating more than 10 points underwater among Virginia voters this year, according to exit polls.

Democrats tried to replay the dynamics of 2020 throughout the race. McAuliffe sought to tie Youngkin to Trump at every turn, pointing to Trump’s endorsement and their focus on similar hot-button themes — up to and including “election integrity.”

Yet Youngkin didn’t go as far as Trump in echoing false claims about last year’s election. Trump, meanwhile, did not campaign alongside Youngkin — much to the McAuliffe camp’s frustration — though he did dial into two of his rallies to help get out the vote.

Trump figures to be far more of a vocal factor in midterm races next year, not to mention his potential candidacy in 2024. Still, Youngkin opens up a potential path for other Republicans to tap into growing frustrations surrounding the lingering pandemic, spiraling prices and Washington paralysis.

Nearly a quarter of Virginia voters said education was their top issue, according to exit polls. Youngkin captured 55% of those voters — erasing and reversing a longstanding Democratic edge among voters who rate the issue as their No. 1 priority, despite McAuliffe’s pledges to raise teacher pay.

Hours before polls closed, Biden was still expressing confidence that McAuliffe would pull out a win. But he sought to insulate himself from any political fallout.

“I’ve not seen any evidence that whether or not I am doing well or poorly, whether or not I’ve got my agenda passed or not, is going to have any real impact on winning and losing” this year’s races, Biden said shortly before flying home from his trip to Europe.

The president now arrives back on American soil with his domestic agenda still stalled and with the year’s biggest race amounting to a rejection of his party.

Democrats are right to point out that a Republican gubernatorial victory a year after a Democrat wins the White House, is Virginia returning to its long-running form of giving to the party out of power in nearby Washington.

Some were privately hoping the race would look like a referendum on McAuliffe rather than Biden. More were angry that Youngkin was able to skate by without having to answer directly and consistently for more extreme elements inside his party.

But Youngkin’s messaging managed to break through in a state that’s been trending blue, even with Trump looming. The issues he surfaced may be less than ideal for Democrats to grapple with, yet they were more than enough for him to win.