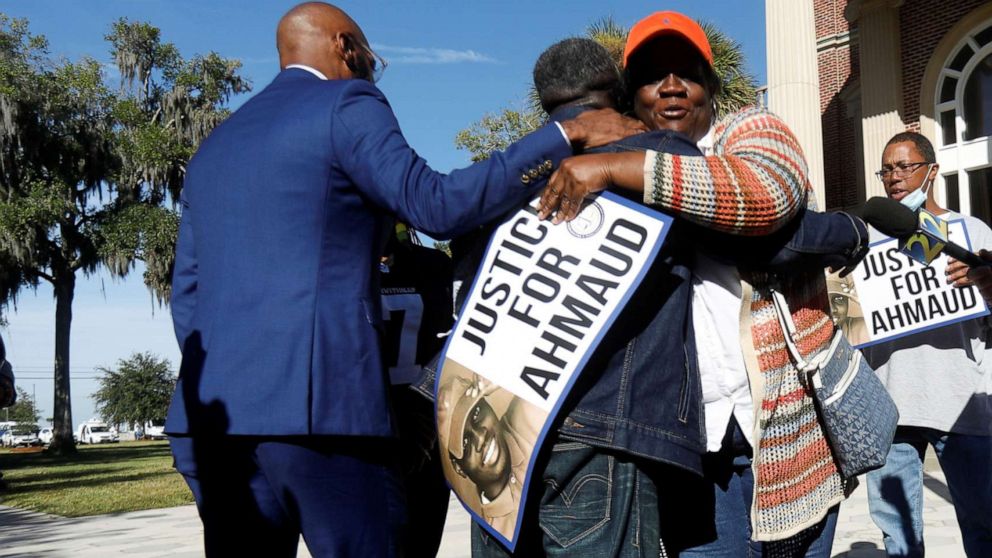 The mother of Ahmaud Arbery said it is “very, very discouraging” that the jury impaneled in the trial of the Georgia men accused of chasing down and killing her son is nearly all white.

The jury was selected on Wednesday to decide the fate of the three white men accused in the shooting death of Arbery, a 25-year-old Black man who prosecutors allege was out for a jog in 2020 when he was attacked.

Opening statements in the murder trial will begin Friday in Brunswick, Georgia, the judge said.

“I have my concerns about getting a guilty verdict,” Arbery’s mother, Wanda Cooper-Jones said in an interview with ABC News’ Byron Pitts that is scheduled to air Friday night on “Nightline.”

Cooper-Jones said that while it was “very, very discouraging” that only one of the 12 African Americans from the final pool of prospective jurors was chosen to be on the panel, she added that “I do believe with state’s evidence that we still will have a good outcome.”

Asked what worries her most about that jury, Cooper-Jones said, “that the jurors that we picked won’t see things the way that I see things and we will get a very different verdict.”

“Justice for Ahmaud looks like having all three individuals … sentenced to life in prison,” Cooper-Jones said.

The jury panel in the Glynn County Superior Court case was picked after an arduous selection process that lasted nearly three weeks and started with a pool of 1,000 potential jurors. The 12 selected include 11 white people and one Black person, which caused an objection from the prosecution based on racial bias. Each juror was revisited and the judge presiding over the case, Timothy Walmsley, said there “appears to be potential discrimination in the panel.”

But Walmsley rejected a motion from prosecutor Linda Dunikoski to reinstate the dismissed Black jurors to the pool of qualified candidates while at the same time recognizing that one of the challenges of the trial “is the racial overtones in this case.”

On Thursday afternoon, one of the seated jurors, a white woman in her 40s or 50s, was dismissed from the panel for undisclosed medical issues. One of the alternate jurors replaced her, bringing the number of alternates to three.

Defense attorneys denied that race was a factor in their decision to use their combined allotted 24 strikes to dismiss Black would-be jurors. They also noted that the prosecution used all 12 of its allotted strikes on white prospective jurors.

Defense attorney Laura Hogue, who represents defendant Gregory McMichael, said at least three of the dismissed Black prospective jurors acknowledged they had supported the “I run with Maud” movement and that others showed up for jury duty with strong opinions that the defendants were guilty.

Four alternate jurors will also be seated for the trial from the remaining all-white candidates left in the pool.

Before the final stage of jury selection commenced, one of the potential jurors in the qualified pool was dismissed for cause after defense attorney Kevin Gough, who represents William “Roddie” Bryan, alerted the court to a series of TikTok videos of the 44-year-old woman performing what he described as a “dance tribute” to Arbery. Gough noted that at least one of the videos posted by the prospective juror included a heart emoji and the hashtag RunWithMaud.

“Clearly this juror has an emotional connection to Mr. Arbery,” Gough said.

The final pool of 48 from which panel was drawn included 36 whites and 12 African Americans, a makeup that is more in line with the population of Glynn County, which is 30% Black.

The three defendants are Gregory McMichael, 65, a retired police officer, his son, Travis McMichael, 35, and their neighbor, Bryan, 52.

The McMichaels and Bryan were also indicted on federal hate crime charges in April and have all pleaded not guilty.

Arbery was out jogging on Feb. 23, 2020, through the Satilla Shores neighborhood near Brunswick when he stopped and went into a house under construction, according to evidence presented at the preliminary hearing. A surveillance video showed Arbery, who lived in another neighborhood of Brunswick, inside the unsecured house looking around and leaving empty-handed.

Arbery continued running past the McMichaels’ home, where Gregory McMichael spotted him and believed he matched the description of a neighborhood burglary suspect, according to his lawyer.

Investigators allege that Gregory McMichael and his son armed themselves and chased after Arbery in a pickup truck bearing a vanity plate of a Confederate flag. Bryan allegedly joined the pursuit and, according to prosecutors, attempted to use his truck to block Arbery’s path.

Travis McMichael is also expected to claim self-defense, arguing the use of deadly force was justified when Arbery violently resisted a citizens’ arrest under a law that existed at the time. The pre-Civil War-era law that was repealed in May primarily due to the Arbery killing gave civilians the power to arrest someone they “reasonably suspected” of trying to escape from a felony.

Bryan recorded a cellphone video of the confrontation that partly caught Travis McMichael shooting Arbery during a struggle and is expected to be the key evidence prosecutors plan to present at trial.

Bryan’s lawyer claims he was just a witness to the incident, but prosecutors alleged he was an active participant. Prosecutors also allege that Bryan told investigators he overheard Travis McMichael yell a racial slur at Arbery as he lay dying in the street, an allegation the younger McMichael denies.

Since Arbery’s killing, the case has frequently been in the national spotlight as protesters took to the streets for weeks to demand the suspects be arrested and as two district attorneys recused themselves.

Former Brunswick District Attorney Jackie Johnson, the first prosecutor to get the case and who once had a working relationship with Gregory McMichael, was indicted in September on a felony count of violating her oath of office by allegedly “showing favor and affection” to Gregory McMichael and a misdemeanor count of hindering a law enforcement officer. Johnson, who lost a reelection bid in November 2020, has pleaded not guilty to the charges.