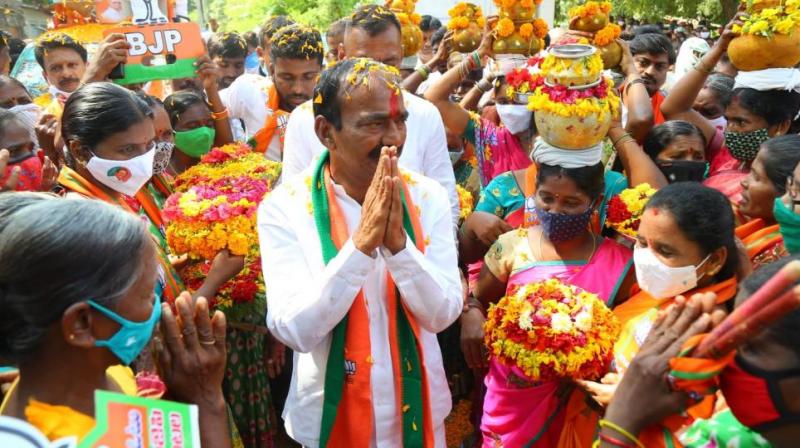 ADILABAD: Shocked Telangana Rashtra Samiti (TRS) leaders have launched a scathing attack on the Congress, saying the national party extended indirect support to the BJP in the Huzurabad assembly bypoll.

The TRS leaders of Adilabad shared a photo on social media that showed Lotus with ‘hand’ as its petals, by giving the caption, ‘Kamalam Cheyyi’ (Lotus Hand).

TRS leaders and cadre launched campaigns against the Congress and the BJP on the social media and tried to spread the impression that the BJP victory was due to the Congress' help to defeat the TRS. This was why the Congress fielded a “weak” candidate in Huzurabad, they argued.

BJP leaders say TRS leaders made such "cheap" comments as they could not digest the victory of Etala Rajendar.

The second caption below the photo reads: “Congress party has donated two kidneys to the BJP, which is surviving on dialysis in Telangana state. This is suicidal to the state Congress.”

Photographs of Etala Rajendar and TPCC president Revanth Reddy were placed on both sides of the ‘Lotus Hand’ photo.

BJP leaders and cadre went into jubilation and celebrated the victory of Etala Rajendar across the state by bursting crackers and distributing sweets. BJP leaders celebrated the Etala victory in Huzurabad, Bhainsa, Adilabad, Bellampalli, Kadam, Asifabad, and Kautala in the erstwhile Adilabad district.