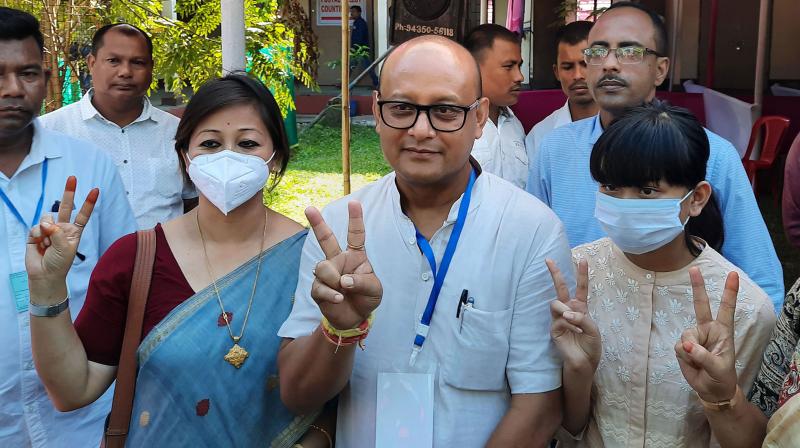 New Delhi/Kolkata: There were a few gains and some losses for the BJP in the 29 Assembly byelections held across 14 states and the three Lok Sabha bypolls held in Himachal Pradesh, Madhya Pradesh and Dadra & Nagar Haveli.

The Trinamul Congress continued its victory sweep in West Bengal as the party bagged all four seats in the Assembly bypolls held at Dinhata, Gosaba, Khardaha and Santipur, where TMC candidates beat their BJP rivals with huge margins. The TMC not only retained its two seats among them, Khardah and Gosaba, but also snatched away two more, Dinhata and Santipur, with huge margins from the BJP, which had earlier won these in the Assembly polls in May. This was also the third time in the last six months that the BJP suffered an electoral whitewash at the hands of chief minister Mamata Banerjee’s party, that now has over 220 MLAs (including five defectors from the BJP) in the House of 294.

“This victory is the people’s victory, as it shows how Bengal will always choose development and unity over propaganda and hate politics. With the people’s blessings, we promise to continue taking Bengal to greater heights!” West Bengal chief minister Mamata Banerjee said in a tweet.

The four Assembly constituencies saw a brazen campaign by the BJP to polarise votes riding on Bengali Hindus’ sentiments in the wake of the communal attacks on the Durga Puja in Bangladesh. Alleging violence by the TMC for his party’s rout, BJP national vice-president Dilip Ghosh, however, claimed: “Our candidates were attacked so that they could not campaign. In such an environment, what more can one expect? The way the bypolls were held, that day is not far when the TMC will get 100 per cent votes. The situation in Bengal will be like one-party rule in China.”

Out of the two Assembly seats in Karnataka, both Congress and the BJP got one each, while the BJP won in Huzurabad, the single Telangana seat that went to the polls, beating the Telangana Rashtra Samiti by a huge margin. In Andhra Pradesh, the single seat byelection was won by the YSR Congress Party.

The BJP also faced setbacks in the Himachal Pradesh and Rajasthan Assembly bypolls, where the Congress bagged all the seats. In Himachal, Jubbal Kotkhia, Fatehpur and Arki were the three seats where the Assembly byelections were held, while in Rajasthan the bypolls were held in Dhariawad and Vallabhnagar.

In the three Assembly bypolls in Madhya Pradesh, the BJP won in two while the Congress won in Raigaon. Maharashtra’s Deglur Assembly seat went to the Congress. In Haryana, Abhay Chautala of the Indian National Lok Dal defeated the BJP’s Gobind Kanda by 6,739 votes, while the two seats in Bihar were won by the ruling Janata Dal (United).

In the Northeast, the BJP made some significant gains. In Assam, the party won three seats while the other two were bagged by its ally, United People’s Party Liberal (UPPL). The three seats in Meghalaya went to the NDP (two) and UDP (one), which was contested by former footballer Eugeneson Lyngdoh. The two single seats in Mizoram and Nagaland were won by the Mizo National Front and the Nationalist Democratic Progressive Party respectively.