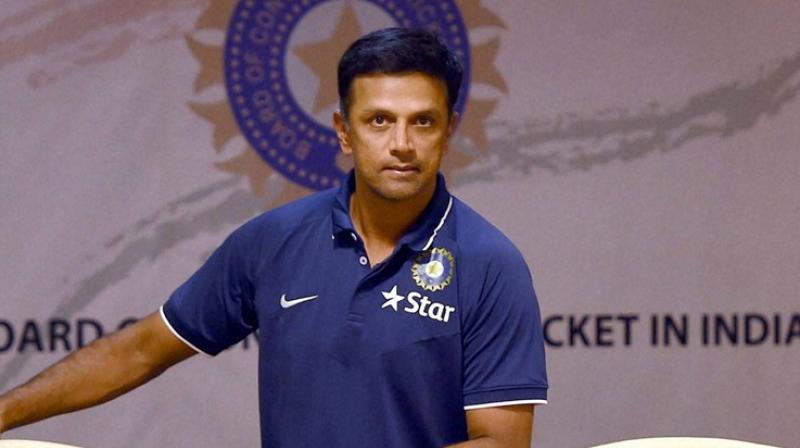 New Delhi: Former captain Rahul Dravid was on Wednesday appointed as the head coach of the Indian men's cricket team by the BCCI, a development that was imminent after the batting great was convinced by the board's top brass.

Dravid, who was working as the head of National Cricket Academy, has been appointed for a period of two years till the 2023 50-over World Cup in India.

He will take charge from the upcoming home series against New Zealand, starting November 17.

The 47-year-old Dravid, one of the greatest to have played for India, was the only choice for BCCI president Sourav Ganguly and secretary Jay Shah, who had called him in Dubai and convinced him to apply for the position.

Once Dravid had applied, the BCCI didn't even need to look at any other application.

His salary will be in the range of Rs 10 crore, which is the highest ever for any coach in the history of Indian cricket.

The BCCI had invited applications for the said position on October 26 to appoint incumbent Ravi Shastri's successor, whose term gets over after the ongoing ICC T20 World Cup.

"It is an absolute honour to be appointed as the new head coach of the Indian cricket team and I am really looking forward to this role," Dravid said.

He also thanked his predecessor Shastri for his role in shaping the current Indian team.

"Under Mr Shastri, the team has done very well, and I hope to work with the team to take this forward."

Dravid, who remains India's second highest run-getter in Tests behind Sachin Tendulkar with 13,288 runs in 164 matches and 36 hundreds along with nearly 11,000 ODI runs (10,889 runs) in 344 ODIs, has been instrumental in drawing the transition module of Indian cricket.

He has been closely monitoring the progress of the cricketers from U-19 to A teams, and subsequently, entry into the senior team. Hardik Pandya became an improved pacer at NCA under him while the likes of Rishabh Pant, Ishan Kishan, Hanuma Vihari, Prithvi Shaw, Shubman Gill have all been under his tutelage at some point in time.

"Having worked closely with most of the boys either at NCA, U19 and India A setup, I know they have the passion and desire to improve every day.

"There are some marquee multi-team events in the next two years, and I look forward to working with the players and the support staff to achieve our potential," Dravid outlined his goals which include good performance in the next T20 World Cup in Australia and the big 50 over edition in India in 2023.

His former India captain and current BCCI president Sourav Ganguly expects his former deputy to take the Indian team to the next level.

"Rahul has had an illustrious playing career and is one of the greats of the game. He has also served Indian cricket as Head of National Cricket Academy (NCA) with distinction.

"Rahul's effort at the NCA has nurtured several young cricketing talents who have gone on to represent the country at the international stage. I am hopeful that his new stint will take Indian cricket to new heights," Ganguly was quoted as saying.

"With two World Cups scheduled to take place in the next two years, it is important to have a seamless transition, and the former India captain is the right man for the job.

"Having provided the much-needed direction to NCA and overseen the progression of the boys at India U-19 and India A level, we believe this is also a natural progression for him as a coach."

Shah also informed that the BCCI will soon announce the coaching staff who will work with Dravid.

"The Board will soon make appointments of other coaching staff, who will support the Head Coach in jointly achieving our targets."

As per convention, it is the national selection committee along with office bearers who would be interviewing the candidates for the job.

Paras Mhambrey is the front-runner to take up the bowling coach's post while Abhay Sharma and Ajay Ratra might face tough competition from legendary South African Jonty Rhodes for the fielding coach's position.

"Obviously, we could have straightaway appointed Rahul but the constitution warranted that we follow the procedures. Therefore RP and Sulakshana had an interview with Rahul. Madan Lal, as he is above 70, is no longer a part of the committee.

"There was no other application as everyone got the drift that Rahul's application meant that there was no chance for anyone else," a senior BCCI source told PTI on the condition of anonymity.