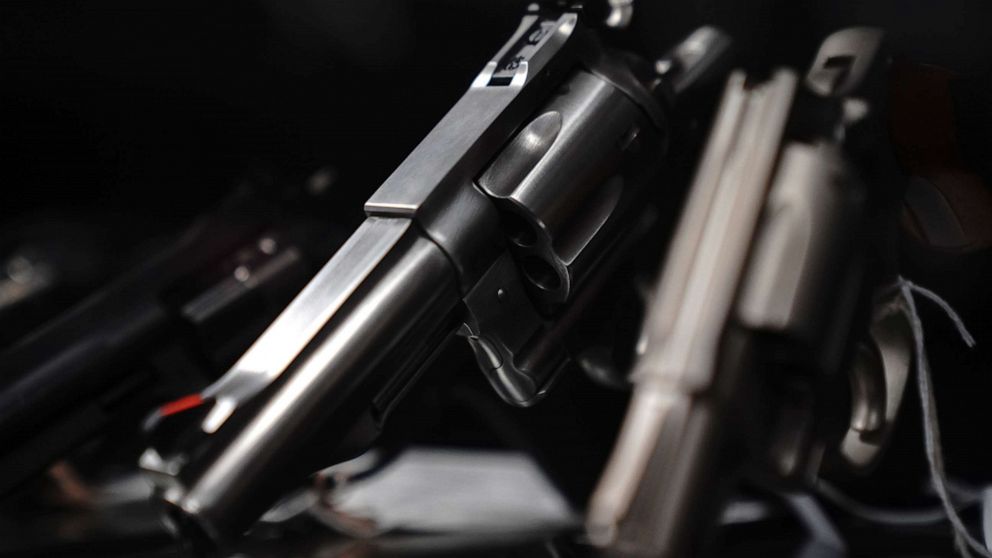 The United States has a gun violence epidemic, and it’s not one shared by its peers. The nation that by one estimate has more guns than people has the highest rate of firearm deaths compared with other high-income countries. Mass shootings, an all-too-common occurrence in the U.S., are also exceedingly rare in peer countries — where governments have often been quick to pass gun reform in the wake of such tragedies.

“Compared to the other peer countries, basically what we have is lots and lots of guns, particularly handguns, and we have by far the weakest gun laws. Not surprisingly, we have huge gun problems,” David Hemenway, director of the Harvard Injury Control Research Center, told ABC News. “I think if we had basically the gun laws of any other developed country, we’d be better off.”

It’s unclear if gun prevalence definitively impacts gun violence, though research by Hemenway’s center has found links between a large number of guns and more firearm homicides, suicides and accidents. The implementation of new gun restrictions has also been associated with a drop in firearm deaths, a 2016 review of 130 studies across 10 countries found.

The U.S. is “not necessarily a more violent society than others,” Dr. Garen Wintemute, director of the Violence Prevention Research Program at UC Davis, told ABC News.

“What we have is unique access to a technology that changes the outcome — firearms,” he said.

It’s not uncommon to compare the U.S. with other developed countries, especially after yet another horrific mass shooting. There are developing countries with higher rates of firearm deaths than the U.S., though comparing gun violence among peers helps to control for other factors, Hemenway said. And while there are lessons in other nations’ policy measures that could help address the problem here, because the U.S. is on such a different plane when it comes to civilian gun ownership, it will also take more research and multiple, targeted solutions to address the scope of the problem, experts said.

“Other countries do better. We should be able to figure out how to do better,” Hemenway said.

Watch ABC News Live on Mondays at 3 p.m. to hear more about gun violence from experts during roundtable discussions. And check back next week, when we look into what some gun owners say could solve the gun violence issue.

The U.S. has become so synonymous with its gun culture, that when Australia was working on enacting tighter firearm policies after its deadliest mass shooting ever, known as the Port Arthur massacre, then-Prime Minister John Howard pointedly said, “We do not want the American disease imported into Australia.”

In 1996, Martin Bryant used a semiautomatic rifle to shoot and kill 35 people and injure another 23 near a popular tourist resort in Port Arthur, Tasmania. In the wake of the shooting, all states and territories adopted the National Firearms Agreement, which, among other things, established a national gun registry, required permits for gun purchases and banned all semiautomatic rifles and semiautomatic and pump-action shotguns. A government buyback program also retrieved some 650,000 now-banned firearms.

In the years since the NFA, gun deaths in Australia decreased, most significantly gun suicides, a RAND Corporation survey found. The review concluded there was weak evidence to support that it had an impact on firearm homicides overall, though noted there was a decline in female firearm homicide victimization after adoption of the NFA, which included a provision denying gun licenses to people subject to a domestic violence order. A 2018 study by the University of Syndey also found that Australia only had one mass shooting in the 22 years since the NFA reforms, compared with 13 in the 18 years prior.

In the U.S., where guns are more accessible, the firearm death rate per 100,000 people in 2016 was nearly four times that of Switzerland, five times that of Canada, over 10 times that of Australia and 35 times that of the United Kingdom, according to a 2018 study published in the Journal of the American Medicine Association. Americans are notably more likely to be killed in a gun homicide, suicide or unintentional shooting than in other high-income countries, a 2015 study in the American Journal of Medicine found. Rates of nonlethal crimes and overall suicides are similar among the countries, but the U.S. does have a higher homicide rate overall, “fueled by the firearm homicide rate,” according to the study.

“What other countries have done demonstrates that you can have policymakers react quickly after a horrific tragedy to make the country and communities safer from gun violence,” Chelsea Parsons, who until recently was the vice president of Gun Violence Prevention at the Center for American Progress, a nonpartisan policy institute, told ABC News. “I think we sometimes in this country, we’re too accustomed to federal policymaking being almost an impossibility when it comes to an issue like gun violence. But the experience of other countries just shows that it doesn’t have to be this hard.”

The number of guns in the U.S. is unparalleled; the country has less than 5% of the world’s population, but 40% of the world’s civilian-owned guns, according to a 2018 report by the Switzerland-based Small Arms Survey. There were over 393 million firearms in civilian possession in 2017 — or 120 per 100 persons, the highest rate globally, the report found. That’s more than double the second-highest rate, in Yemen, at nearly 53 per 100 persons.

For Joel Dvoskin, a forensic psychologist at the University of Arizona College of Medicine who specializes in violence prevention, reducing gun ownership to levels seen in peer countries is “literally impossible.”

“The horse is already out of the barn, as they say,” Dvoskin told ABC News.

Efforts to address the problem at the national level may be hindered by no one government agency taking “overall responsibility” for it, he said. “Our system’s spread out across a bunch of different agencies.”

The U.S. stands apart from nearly every country in the world, not its just peers, with a constitutional right to bear arms — though that doesn’t mean the federal government can’t ban certain firearms or enact other restrictions, according to Allison Anderman, senior counsel and director of local policy for the Giffords Law Center to Prevent Gun Violence.

“Gun advocates use the Second Amendment as a defense to any and all gun laws, but it’s not legally accurate,” Anderman told ABC News. “The Second Amendment, at least as interpreted by the U.S. Supreme Court, permits a whole host of gun regulations, including assault weapons bans.”

The U.S. did in fact ban the sale of certain semi-automatic weapons, until the bill expired in 2004 after a decade.

Universal background checks, a key effort among gun control advocates, is a “really basic” law abroad that the U.S. lacks but nearly all Americans support, Parsons said. The massacre at Sandy Hook Elementary School in Connecticut in 2012, where 20 children and six adults were gunned down, appeared to be a watershed moment for gun reform. But four months later, legislation to expand background checks failed to pass the Senate due to what then-President Barack Obama blamed on lies by the “gun lobby and its allies.” A reintroduced bill passed the House in March and is currently before the Senate.

“The difference between the United States and other countries isn’t the Second Amendment, it’s the gun lobby and the power of the gun lobby in this country, and an extremist ideology among red states, essentially, that prohibits any meaningful action,” Anderman said.

There is an “opportunity for change” when gun laws become a “single voting issue,” she said. It’s a tactic long employed by gun rights advocacy groups like the National Rifle Association, the country’s largest pro-gun lobby. Mobilizing its 5 million members around gun policies has been a “pivotal component to our continued influence and success,” the organization told The Atlantic in an article published in September. ABC News had reached out to the NRA for this piece but did not receive a response.

An ABC News/Washington Post poll from April found that those who strongly prioritized enacting new laws to try to address gun violence versus protecting the right to own guns were nearly even — about four in 10 in both camps. Overall, the public’s priority on enacting new gun control laws has waned — to 50% from 57% three years prior, with the sharpest decline among 18- to 29-year-olds.

“When people say that they’re fed up and they’ve had enough and they’re only going to vote for representatives who reflect their interests on this topic, then there can be change,” Anderman said.

The “uneven patchwork” of gun laws enacted at the state level is another challenge in addressing the gun violence problem, Parsons said. Research by the Giffords Law Center to Prevent Gun Violence has found a correlation between stronger gun laws, such as permit requirements and waiting periods, and lower gun homicides and suicides, the latter of which account for most gun deaths in the U.S. But regulations vary widely from state to state, with red states largely having weaker gun laws, according to the center.

“You have states that have enacted really good, comprehensive, strong gun laws, but those laws are undermined by the much weaker laws of the states surrounding them,” Parsons said.

The “classic example” of this, she said, is Chicago. Illinois is neighbored by states including Indiana and Wisconsin that have comparatively weaker laws, such as a lack of universal background checks, according to the Giffords Law Center to Prevent Gun Violence.

How do we live with guns?

In confronting the gun violence problem, for experts like Dvoskin and Hemenway, the conversation needs to include, “How do we live with guns?” It’s a public health approach akin to measures taken, for instance, to make driving safer or prevent smoking, and demands a broad focus.

“We’ve learned that there are limits to what you can do to prevent firearm violence if you just focus on firearms themselves,” Wintemute said. “It’s important to focus on the determinants of violence, whether firearms are involved or not.”

To that effort, Wintemute’s research program recently found a link between male gun owners with a history of alcohol charges and suicide risk, and is studying the intersection between firearm ownership and opioid use in suicide risk.

More firearms research and data are needed to find solutions in what has been for decades a federally underfunded area, Hemenway said. That could mean more studies looking at what is working in other countries to reduce gun violence. Support and funding for non-legislative approaches to the problem, such as community-based violence prevention, has also been advocated.

Measures to safely live with guns, such as storage requirements, smart guns that can only be used by the owner and features that prevent guns from firing when dropped or after the magazine is removed, could also be improved, Hemenway said.

“Too many people just think gun control means taking away people’s guns,” Hemenway said. “There’s just so, so many things that we could do as a country if we wanted to reduce the problem.”