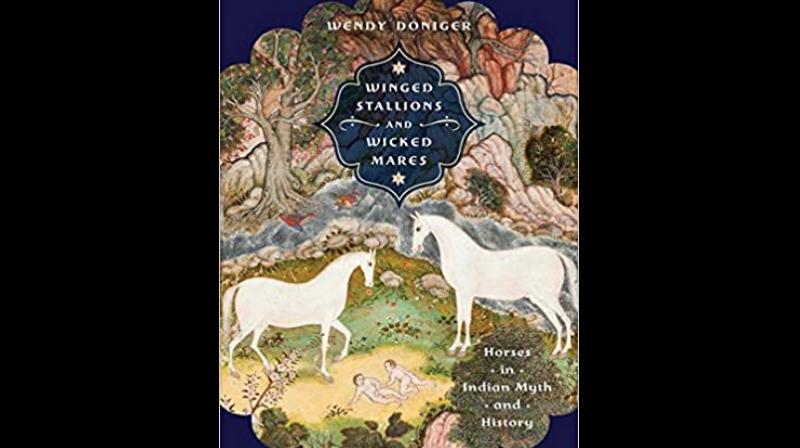 Wendy Doniger’s book Winged Stallions and Wicked Mares is a constant delight. It is, as the sub-title suggests about “Horses in Indian Myth and History”. The work covers a staggering range of information with effortless clarity and elegance. She says in the beginning (Horses in Indian Nature and Culture) :

“Prithivi (a feminine form of prithu) is a Sanskrit word for the earth, with its wide open spaces that such kings must always conquer”. Prithu was the name of the first king on earth according to Indian mythology. More than the horse-drawn chariot it was the horse that “made possible conquest in war; the horse came to symbolize conquest in war through its own natural imperialism.” (p. 3)

“But the land of India did not welcome horses.” (p. 3). The terrain and the frequently changing weather made it difficult for horses. “…the Ashvashastra, insists that you should not ride horses in the three months of the hot season, and another medieval text, the Agni Purana, says, ‘Winter, the cool month, and spring are for riding horses; in summer, autumn and the rains, the riding and harnessing of horses is forbidden.’ Though the Indian soil apparently has enough lime and calcium to support cattle, it is not good enough soil for horses; contemporary breeders now add calcium, manganese, iron and salt to the horses’ diet. There are very few tropical areas in which horses do well (South Asia is one), and even there it takes a great deal of work, and money, to keep them healthy.” (p. 3)

The horse, despite the constraints of breeding and upkeep, was the deciding factor rather than the elephant, in every war in the sub-continent over the last one thousand years until 1857 when the forces of the British owned East India Company fought against the combined armies of the Nawab of Awadh, the vastly depleted Mughals and the Marathas. Need one add the soldiers of the East India Company including a large cavalry contingent were Indian. A deciding factor in the British victory on field was very likely superior horsemanship supported by a strong artillery.

Doniger’s connoisseur’s sensibility embraces a wide variety of ideas related to the horse being a symbol of diverse activities like being employed to draw a plough in agriculture, for pulling carts and carriages in the pre-motor car era, for sport such as polo and racing for money, and of course, in war in the cavalry and transporting heavy artillery in the real world before WW-I and as agents of supernatural happenings or ‘chamatkars’ in the mythical world. “The white stallion in [Rudyard Kipling’s] Kim is the key to a complex spy network involved in the ‘Great Game’ of espionage that England was playing against Russia on the fields of Northwest India”. She adds, Kipling’s Kim was “practically a handbook for CIA agents in Southeast Asia in the nineteen-fifties and sixties”. (p. 185)

She gives a religio-spiritual example from the Buddha’s life citing a first century BCE carving at Sanchi. “In fact, it is not an image of the Buddha himself, for he is not actually represented here but is assumed to be invisibly present on the visible horse, Kanthaka.” It is a frieze of five images of the same horse Kanthaka depicting the departure of Prince Gautama from the palace into the world to become the Buddha. (p. 113)

Hindus and Muslims worship at the shrines of horse saints such as Alam Sayyid or Ghore Ka Pir in Baroda and “in Bengal, Hindus offer clay horses to deified Muslim saints like Satyapir”. The Muslim equestrians are believed to be followers of Khandoba. “… Khandoba is an equestrian manifestation of the Hindu god Shiva.” (p. 135)

Doniger observes, “Arabian horse lore strongly influenced Indian horse lore, and there are many Indian stories about heroic ‘Turkish’ horses and horsemen.” She quotes Alf Hiltebeitel, “The name Muttal Ravuttan derives its second element from a term meaning Muslim cavalier, horseman, or trooper. The term clearly evokes its common and traditional association of the Muslim warrior on horseback, a Sufi warrior leading his band of followers or the leader of an imperial army of conquest.” (. 127)

In a miniature painting from Punjab Hills, Guler, 1760-70, in the book, a groom is seen presenting the horse Kalki to Krishna ( the Hindu God). “In Pahari paintings, Kalki is sometimes represented as the groom of a white stallion. When the Muslim sect of Imam Shahis reworked the stories of the avatars, Kalki, the tenth avatar, became the Imam, who rides a horse.” (p. 86)

“The Puranas [400 to 1400 CE] built upon earlier stories about horses, particularly underwater horses. In one Brahmana, Prajapati takes the form of a white horse to seek Agni when he hides from the gods, in water ; when Prajapati enters the water in this form, Agni burns the horse’s mouth.” (p. 70). There is also the moving story of Goddess Saraswati and the foal on p. 73 and then on p. 79 a tale about Goddess Lakshmi, “Then Shiva came to her and promised that Vishnu would appear to her in the form of a stallion and beget a son upon her. Shiva vanished and sent Vishnu to Lakshmi: Vishnu begat a son upon her, stallion mounting mare ; then they resumed their normal forms and returned home, giving the son to a king who generated ascetic heat to obtain him.”  And she adds, “This text invokes the Vedic mare Saranyu as a precedent for a goddess who becomes a mare to bear a son, but now Saranyu draws in the later Puranic motif of the mare that generates ascetic heat at the confluence of the ocean and rivers.” (p. 79-80)

Wendy Doniger’s scholarship as a formidable Indologist is widely known but what is not, is that, she is a truly knowledgeable lover of horses and is an accomplished rider.

Partha Chatterjee writes on cinema, music, literature and related cultural matters. He is also a filmmaker.