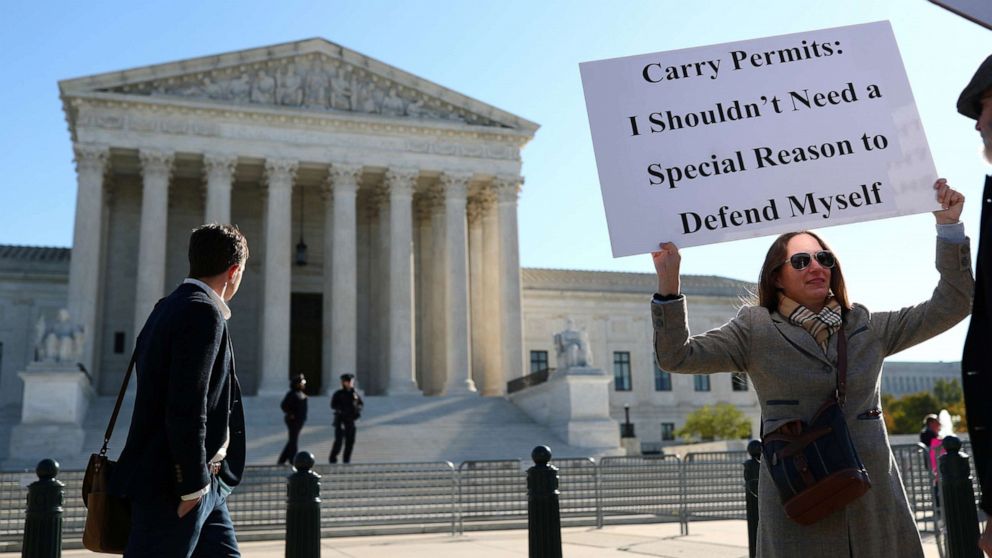 The nation’s highest court on Wednesday spent nearly two hours wrestling with the concealed carry of handguns in public places and discretionary permitting requirements in nearly a dozen states that impose limits in the interest of public safety.

The oral arguments on Second Amendment rights — the court’s most consequential in more than a decade — focused on a century-old New York state law that requires gun owners to show “proper cause” — or a specific special need — to carry a handgun in public for self-defense.

Eight other states have similar “may issue” laws that give local authorities discretion to decide who receives a license based on particularized circumstances. Most states have looser requirements giving otherwise law-abiding gun owners easier ability to carry.

Many of the court’s conservative justices appeared skeptical of New York-style regimes that subject a constitutional right to bear arms to the discretion of a government official. At the same time, several raised concerns about public safety if carry restrictions were rolled back too far.

The Second Amendment “is to be interpreted the same way you’d interpret other provisions of the Constitution,” said Chief Justice John Roberts. “The idea you need a license to exercise the right is unusual in the context of the Bill of Rights.”

“Why isn’t it good enough to say, I live in a violent area and I want to be able to defend myself?” asked Justice Brett Kavanaugh. “That’s the real concern, isn’t it, with any constitutional right, if it’s the discretion of an individual officer, that seems inconsistent with an objective constitutional right.”

“There is a history and tradition, and it exists to the present day, of permitting regimes,” Kavanaugh added later. “But it’s a narrow legal issue of ‘shall issue’ versus ‘may issue’ [a permit].”

New York Solicitor General Barbara Underwood vigorously defended the state’s “may-issue” law as consistent with the history and tradition of U.S. states enacting reasonable limits on the carrying of firearms in public.

“New York is not an outlier,” Underwood argued. “Many ordinary people have licenses.” But, she insisted, the Supreme Court itself has ruled that the right to carry a gun is not unlimited.

“They are dangerous guns,” said Justice Stephen Breyer. “In your opinion … you want no restrictions?”

“We’re asking for the [permitting] regime to work the same way for self-defense as it does for hunting,” Clement replied.

“You can’t hunt with a gun in Central Park,” said Justice Thomas, “but I’m certain there are places in Upstate or Western New York where you can … If you can have that difference for the purpose of hunting, specifically, why can’t you have a similar tailored approach for the Second Amendment based upon if it’s density in New York City, if that’s a problem, the subway, then you have a different set of concerns than Upstate New York?”

The New York State Rifle and Pistol Association, an NRA-affiliate, which brought the case has been hopeful that the Court’s 6-3 conservative majority would affirm a sweeping right to carry guns outside the home for self-defense across the state.

The text of the Second Amendment offers a guarantee “not just to keep arms, but to bear them,” insisted Clement.

An attorney for the Biden administration argued that history and tradition of gun ownership in the US has featured limits on concealed carry for decades. Such laws “span 150 years in all regions of the country,” argued Principal Deputy Solicitor General Brian Fletcher. “The question before the court is, of all the approaches [states have] taken, is this one the Second Amendment must take off the table?”

The debate over concealed carry rights comes as gun sales continue to soar across the country and gun violence deaths have continued to climb. More than 35,000 Americans have been killed by guns so far this year, according to the independent National Gun Violence Archive.

In a nod to those circumstances, the court’s liberal justices seemed ready to vote to uphold New York’s law and affirm discretionary permitting programs.

Outside the court, a group of gun violence victims and survivors — including representatives from mass shootings in Parkland, Florida, Dayton, Ohio, and Louisville, Kentucky — held a small rally to make their voices heard. Former Arizona Rep. Gabby Giffords also addressed the crowd.

“Today’s argument made clear that even the court’s most conservative justices have hesitations about granting the gun lobby its ultimate goal in this case – the unrestricted right to carry guns in all public places at all times,” said Eric Tirschwell, executive director of Everytown Law.

“There are a number of ways the court could ultimately decide this case, and the details of its ruling matter,” he said. “As the justices heard today, this is ultimately about whether elected officials will continue to be able to make decisions about protecting their communities – including by limiting who can carry guns in football stadiums, university campuses and shopping malls.”

ABC News’ “Rethinking Gun Violence,” is examining the level of gun violence in the U.S. — and what can be done about it.