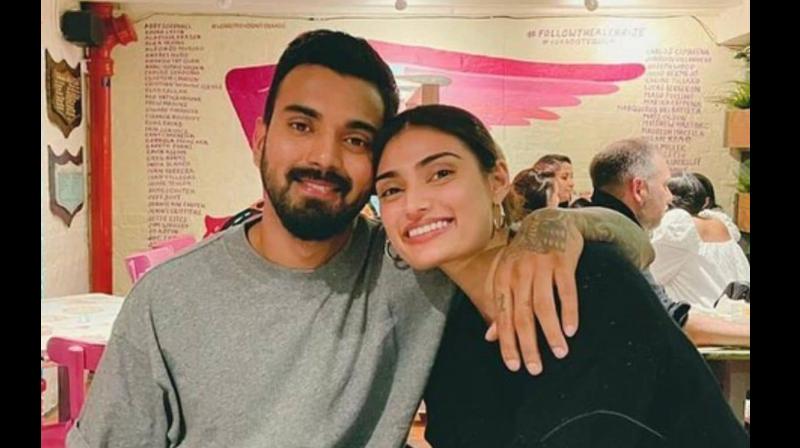 Putting a ring on it is nice, but your relationship is not serious till it is on the gram. Athiya Shetty travelling with cricketer KL Rahul and watching him play around the world is old news, and we all knew they were dating, but their relationship was only made official a few days ago when the cricketer posted a smiley pic of them with a heart emoji wishing her happy birthday on insta. Until you go public with your love on social media (Instagram being the most popular choice) you really are not a couple.

Actor Vidyut Jammwal and socialite Nandita Mahtani were dating for a while and spent most of their time together during the lockdown, but their relationship was sealed when the couple posted a pic of holding hands at the Taj Mahal (with her rock prominently displayed) and an image of them going rock-climbing together, announcing to everyone that they are in love and want to get married. Vidyut is said to be reserved, but you could see his happiness on the gram.

If your boo (modern day usage for partner) is making excuses about posting pictures of you together, doesn’t want to be tagged, forbids you to post about your relationship or is grumpy about even posing with you in a group picture, then it means they are still exploring their options, and really not sure about you. And as far as they are concerned this isn’t serious relationship material!
Not going insta-official is a serious red flag.

“Considering the age we are in and also the fact that there has been limited social interaction in the last two years due to the pandemic, Insta is the window into everyone’s lives. It’s the portal which shows our everyday lives. Even with celebs, where have there been offline sightings? It’s all on the gram. When people start posting a picture with someone, it means they are comfortable with them and this is the modern age public appearance,” explains Siddharth Mahajan, partner, Shivan & Narresh.

Actors Rakul Preet Singh and Jackky Bhagnani too went insta-official with a loved up post on the former’s birthday. You don’t have to go all out posting icky images of sticking your tongue down the other person’s throat like Kourtney Kardashian and Travis Barker, but a cute lived up, cuddled up image with a heart or ring emoji followed by a few mushy lines praising your other half is the perfect way to show the world that you are a happy couple.

“Insta is a part of who we are, it’s a parallel universe. I use it mainly for work, but for many it’s a way to stay connected with friends and family. A lot of effort is put in while posting — it's all highly curated. If someone is a public person on social media, but has an issue announcing relationship status, then chances are they are not serious about it. In the times that we live in, this a litmus test for a relationship. If it’s not on the gram, is it even real?, points out Taruna Seth, founder & navigator-in-chief Encompass Experiences.

Just make sure you have broken up with your ex before you do so or warned your former flame about going public to avoid a backlash. Actor Ioan Gruffud wouldn’t have anticipated the backlash he just faced from his ex wife Alice Evans when he recently posted an image of himself with his much younger girlfriend (an extra on his current show) with the caption, “Thank you for making me smile again.” Alice has accused the two of having an affair behind her back for years, called her a home-wrecker and has been abusing Ioan!

Well, rumours of Katrina Kaif and Vicky Kushal being together have been floating around for a while — with many talking of them likely to get get married too — they haven’t made it official on insta yet! And neither has commented/ denied it too. Ditto Kiara Advani and Sidharth Malhotra. Just rumours, they are spotted together often but no confirmation on insta!