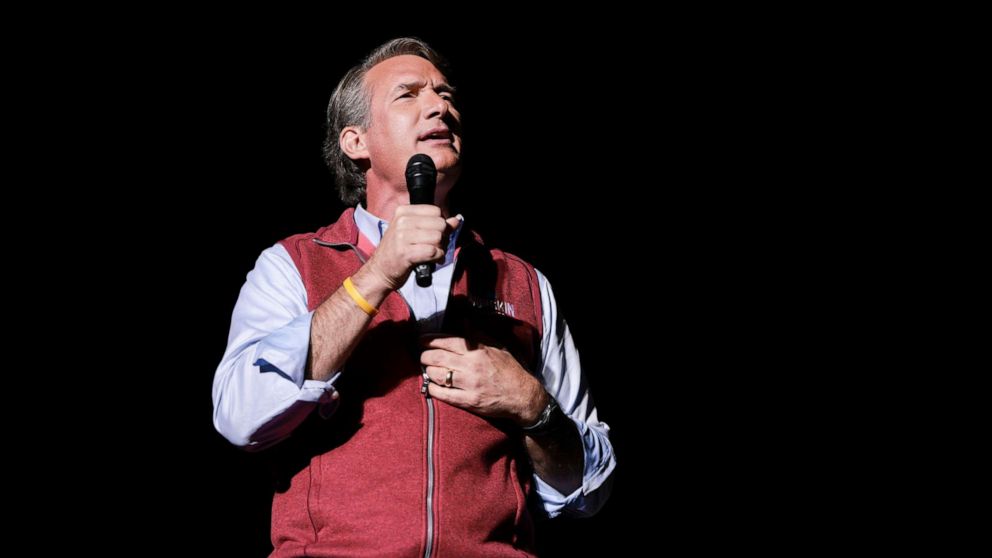 Republican Glenn Youngkin, a former private equity executive running his first campaign for political office, will be the next governor of Virginia, ABC News has projected.

“My fellow Virginians, we stand here this morning at this defining moment, a defining moment that yes, started with two people on a walk and a defining moment that is now millions of Virginians walking together,” Youngkin said around 1 a.m. Wednesday at his election night headquarters in Chantilly, Virginia. “Together — together, we will change the trajectory of this commonwealth. Friends, we are going to start that transformation on day one.”

After not initially conceding in remarks around 10 p.m. Tuesday, Democrat Terry McAuliffe issued a statement Wednesday morning acknowledging his defeat and congratulating Youngkin on his victory.

“While last night we came up short, I am proud that we spent this campaign fighting for the values we so deeply believe in,” the statement said. “While there will be setbacks along the way, I am confident that the long term path of Virginia is toward inclusion, openness and tolerance for all.”

Youngkin’s projected win over McAuliffe, a longtime fixture in Democratic politics and a former governor of the commonwealth, marks the first time a Republican has statewide in Virginia since 2009 and the end to Democrats’ trifecta government control in Richmond. With Sears and Miyares also defeating their Democratic opponents, Republicans swept the statewide offices. According to the Associated Press, the GOP will flip at least five House of Delegates seats. The Republican candidate is also leading in one of the four delegate races that have yet to be called; if he wins, Republicans will flip the lower chamber from a 55-45 Democratic majority to a 51-40 Republican majority.

The Republican flips are warning shot to Democrats one year out from the 2022 midterm elections.

The governor’s race, nationalized by the candidates themselves, was viewed by most as a referendum on President Joe Biden and a bellwether for next year’s contests, when Democrats have to defend their slim majorities in the House and Senate with history already against them.

Poll after poll showed Republican voters felt more enthusiastic about participating in this election than Democratic voters, and in the lead up to the election, Youngkin was able to turn the race into a dead heat.

He centered his closing message around parents’ rights to have a say in their child’s education, accusing McAuliffe of wanting to “put government in between parents and our children” after he said during the final debate that he doesn’t “think parents should be telling schools what to teach.”

Youngkin also pledged to raise the standard in schools, keep them open to in-person instruction amid the pandemic and ban critical race theory from being taught in K-12 schools, even though it’s not in the curriculum.

“We’re gonna embrace our parents, not ignore them. We’re gonna press forward with a curriculum that includes listening to parents’ input, a curriculum that allows our children to run as fast as they can, teaching them how to think, enabling their dreams to soar,” he said.

McAuliffe called Youngkin’s closing message around education divisive, saying, “He has pitted parents against parents. He’s got parents against teachers, and he’s bringing his personal culture wars into our classrooms.”

But according to exit polls, Youngkin’s message appears to have resonated with Virginia voters — about half say parents should have “a lot” of say in what their child’s school teaches — and now can serve as a blueprint for Republican candidates competing in bluer areas of the country.

Essentially running as the incumbent in the race, McAuliffe promised to build on Democrats’ accomplishments over the last eight years, beginning first under his administration. He made promises like increasing the minimum wage and teacher pay, making health care more affordable and requiring vaccinations for nurses, doctors and teachers.

But his campaign against Youngkin focused more on a Republican who was not on the ballot — Donald Trump — and painting a dire picture of what Virginia would look like under a Youngkin administration by asserting that Youngkin’s agenda is Trump’s agenda.

At every opportunity, McAuliffe and his allies tied Youngkin to the former president, who Virginia voters rejected by a 10-point margin in 2020. Trump endorsed Youngkin after he won the nomination and never campaigned with him directly, but that didn’t stop McAuliffe from linking them as one in the same.

The former president took partial credit for Youngkin’s projected victory, saying in a statement, “I would like to thank my BASE for coming out in force and voting for Glenn Youngkin. Without you, he would not have been close to winning.”

He mocked McAuliffe’s strategy of connecting Youngkin to Trump.

“It is looking like Terry McAuliffe’s campaign against a certain person named “Trump” has very much helped Glenn Youngkin. All McAuliffe did was talk Trump, Trump, Trump and he lost!” Trump said in a second statement. “I didn’t even have to go rally for Youngkin, because McAuliffe did it for me.”

McAuliffe’s apparent defeat Tuesday is the latest indication that trying to tap into voters’ disapproval of Trump may not be a winning strategy for Democrats — especially when they’re facing headwinds from an unpopular president and stalled agenda in Washington. According to exit polls, 54% of voters disapprove of Biden’s job performance, and nearly twice as many “strongly” disapprove of his work in office than strongly approve.