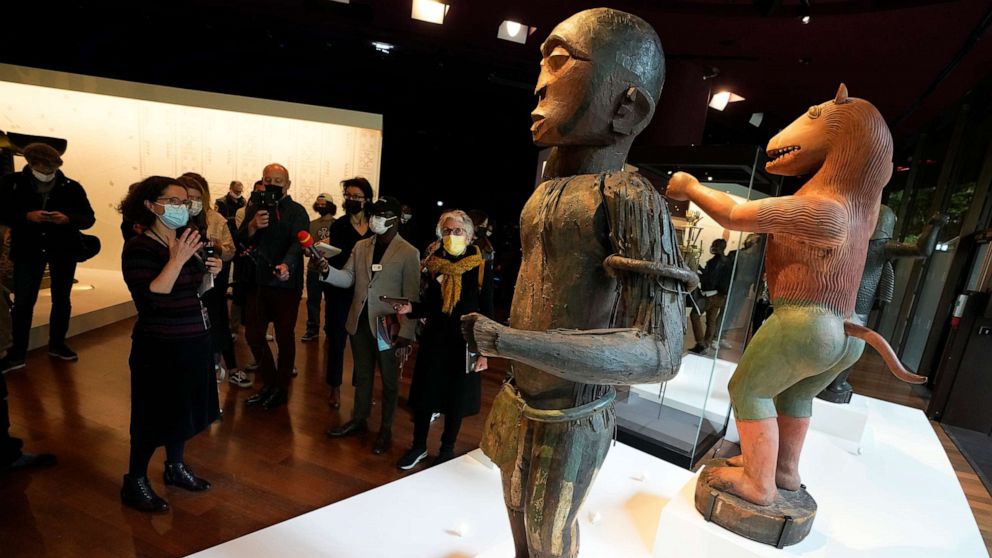 PARIS — Twenty-six looted royal treasures will return to their country of origin this week after nearly 130 years of French ownership, as debate continues over repatriating artifacts.

The pieces were looted following the war fought by France against the Kingdom of Dahomey, a former African kingdom situated in the south of present-day Benin, during the height of French colonialism in Africa.

On Nov. 17, 1892, French troops took over a palace in the city of Abomey, causing King Béhanzin to flee, leaving behind a set of royal objects the French took.

The works — including carved wooden doors, royal thrones and statues — had been on display in French museums since 1900. They will be returned to Benin in the course of the week.

“These artifacts returning to the country today, it’s just historical for the people from Benin,” Calixte Biah, curator of Ouidah Museum of History in Benin, told the Associated Press. “When you look at the craftsmanship of these artifacts, you realize that in the times of the Dahomey Kingdom, there were great artists.”

French President Emmanuel Macron formalized the return of the looted treasures during a ceremony at the Quai Branly – Jacques Chirac Museum in Paris, where the pieces have been held since 2003, in late October, citing the need to “give African youth back access to their heritage.”

Macron is expected to meet Benin’s President Patrice Talon on Nov. 9 to sign the transfer treaty, allowing the works to be transported to Cotonou, the economic capital of Benin, and be shown to the public there.

The exhibition of looted treasures has been a cause for debate for many hundreds of years. Centuries ago, Greek statesman Polybius exhorted the victors of the future “not to make the calamities of others the adornment of their homeland.”

Today, the debate over the restitution of artifacts looted during colonization is in full swing. Just last month, a University of Cambridge college returned one of the artifacts looted by British soldiers known as a Benin Bronze to Nigeria.

Benin authorities had repeatedly demanded the return of the national treasures from France without success. In 2016, the French government refused Benin’s requests, arguing that France was also attached to the circulation and protection of heritage and was not legally obligated to return the pieces.

But in November 2018, Macron announced the decision to return 26 pieces of the treasure of Abomey. The process to get to this point since then has included a cycle of conferences and an exhibit in Paris.

The works, including a prestigious royal chair of Yoruba kings adorned by two floors of sculpted and painted figures, were on display at the Quai Branly Museum for the final time last month before making their journey home.

According to the museum, this farewell exhibition was “highly successful,” with over 15,000 visitors in one week. Following their return to Benin, the precious objects will be integrated into the Museum of the Epic of the Amazons and the Kings of Danhomè that is being built in in Abomey.

Benin’s Foreign Minister Aurelien Agbenonci rejoiced that “France and Benin are showing the world an example of museum and heritage cooperation through this restitution.”

But critics of restitution argue that decisions like this are a “Pandora’s box” that could lead to the emptying of European museums.

According to some experts, the scale of colonial spoliations in Africa is considerable.

“Statistically, I think we can say by adding up the inventories of African national museums, which hover around 3,000 or 5,000 when they are large collections, that 90 to 95% of African heritage is outside the continent in major museums,” Alain Godonou, director of the museums program at the National Heritage and Tourism Development Agency of Benin, said at a 2007 UNESCO Forum on Memory and Universality.

In order to proceed with the transfer of the Benin artworks, a new law was passed by France’s Parliament in December 2020 to make it legal to return cultural artifacts seen as properties of the French state.

Bénédicte Savoy, whose research helped lead to this restitution, highlighted the international resonance of the decision, comparing it to “the fall of the Berlin wall” as he hopes for similar reflections in other European museums.

“This restitution is a major event in the history of the 21st century,” Savoy told ABC News. “Its importance cannot be underestimated.”

Yet, others are downplaying France’s move, suspecting more delaying tactics on other artifacts.

Congolese activist Mwazulu Diyabanza told ABC News, “We are awaiting a declaration of principles whereby France and its Western counterparts will recognize the crimes committed and return without any form of trial everything they have stolen and forcibly taken.”

He added, “It is not up to the thief, the prevaricator, and the dealer to decide when and how much of the works to be returned.”