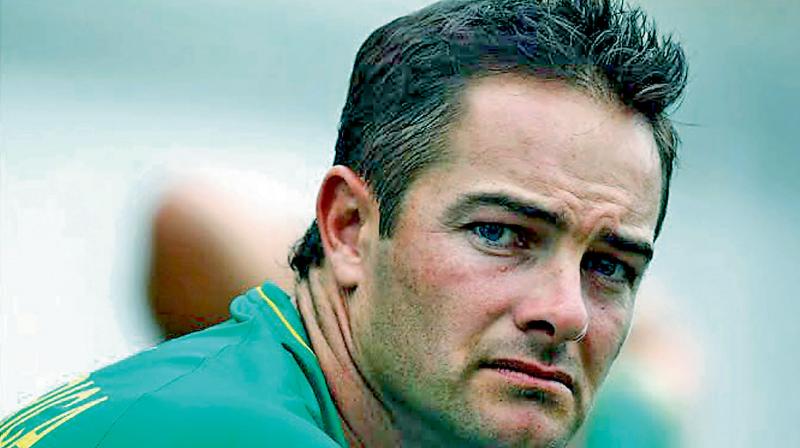 Sharjah: South Africa head coach Mark Boucher says missing out on the semifinals of the T20 World Cup due to an inferior net run rate was a bitter pill to swallow.

South Africa emerged as a strong contender to qualify for the semifinals as the tournament progressed but despite winning four of their five matches, the Proteas failed to make the top four.

In their final group game they defeated Eoin Morgan and Co. by 10 runs which was not enough to seal a top four spot as England and Australia, who also had eight points each, had a better net run rate than the Proteas.

"It's not successful because you're knocked out of the World Cup. It's a bitter pill to swallow" Boucher said at the post match conference.

"I think we played some very good cricket throughout the campaign, cricket under a lot of pressure as well after having lost our first game.

"We put in a lot of hard work in training, our chats were good. I think we beat the in-form side in white-ball cricket for a while now."

Having lost the toss and asked to bat, South Africa needed to restrict England below 130 to qualify for the semis but weren't able to do so.

"It's a tough one for the guys in the changing room. We knew what we had to do today, the equation was very difficult for us to have to get through," Boucher said.

"I just said to the guys just try control what we can control. Unfortunately, we can't control what other results are out there. We did the job today but it's quite bitter."

Boucher rued the missed opportunities South Africa could have capitalised on in the games against Australia and Bangladesh.

South Africa had almost defended 118 for 9 in their campaign opener against Australia. It was the only game they lost.

"Well, the first game. The first game was tight. We just didn't bat well enough. It was tough. We lost the toss. We batted first and we weren't 100 percent sure what a good total was because we were the first game to go out there and be played.

"We maybe looked at getting 160 but probably needed about 130, 140 to be competitive. We could have maybe done better there."

They had a chance to improve their net run rate against Bangladesh. However, they took 13.3 overs to chase 85. If they had done it inside eight overs, things could have been different.

"Chasing a small total against Bangladesh, people can maybe look at that and said we should have gone a bit harder there, but that wasn't the intention, and we lost three wickets on a wicket that is going all over the shop.

Boucher, however, was happy with the side's good show at the tournament, which he believes will stand them in good stead.

"This team know that is we are on a journey, upward curve, that we are learning along the way. You know, we by no means are a finished product," the 44-year-old said.

"These games will stand us in very good stead because as I said, every game we played was under pressure. That's one thing we probably haven't done very well in the past is playing big games, pressurised games, and we really did well in this particular competition."

Flying under the radar by quietly going about their business, South Africa had an impressive tournament. After losing to Australia, they rallied on to defeat Sri Lanka, Bangladesh, West Indies and the mighty England.

Boucher feels this young Proteas side is a work in progress and is headed in the right direction.

"Yes, it's a young side. We are still developing and hopefully we can go from strength-to-strength from here, take this confidence through, as well," he said.

"It's not something we just arrived at a World Cup and all of the sudden start playing good cricket. We have won a lot of games in the recent time.

"So we are heading in the right direction. We just need a bit of good luck and a bit of fortune to go our way and hopefully we can sort of put something in the trophy cabinet soon."