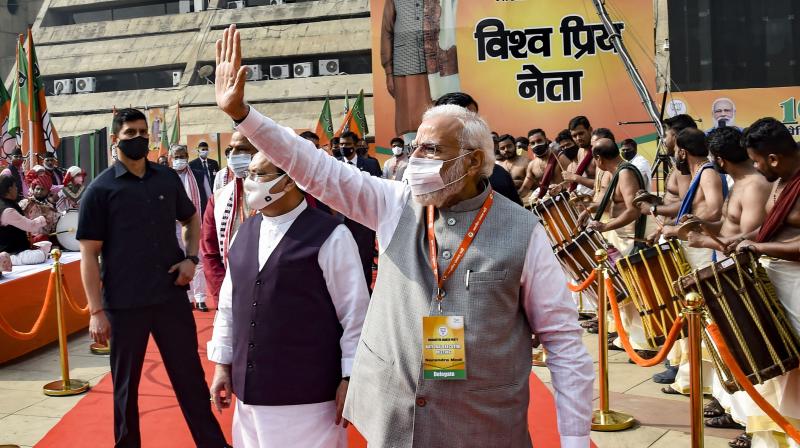 New Delhi: As the BJP gears up for the coming electoral battle in five states due early next year — in Uttar Pradesh, Uttarakhand, Goa, Manipur and Punjab — and its election strategies focusing on retaining power in four and making its organisational relevance felt in Punjab, where the party lost its old Akali Dal ally over the contentious farm laws and faces one of its toughest challenges in the form of farmers’ protests, Prime Minister Narendra Modi on Sunday urged the party leaders to become a “bridge of faith” for the common man and continue following the values of “seva, sankalp aur samarpan” (service, resolution and commitment) to win over the people’s hearts. The coming Assembly polls were on top of the agenda for the BJP’s recently reconstituted national executive, which held its first meeting on Sunday.

Originating in Punjab, the ongoing farmers’ protests against the three agricultural reform laws could impact the BJP’s prospects in Uttar Pradesh and Uttarakhand as well, where the ruling BJP will face new challenges in the form of new rivals and new alliances in the Opposition camp. The Narendra Modi government so far remains unwilling to roll back the contentious laws. The Assembly poll results, mainly in the most politically and electorally crucial state of Uttar Pradesh, will have a major impact on the 2024 Lok Sabha polls.

In his concluding remarks at the national executive, which was also attended in virtual format by many national executive members and several chief ministers due to the Covid protocols, Mr Modi expressed confidence that the BJP will “win the people’s trust as it has been moving forward by taking up issues close to the people”. BJP president J.P. Nadda, who during his inaugural speech also gave targets to the party’s state units for organisational growth, reiterated what his predecessor Amit Shah, now Union home minister, had said in 2018 — that for the party “its best is yet to come”.

The national executive also passed a political resolution, which hailed Mr Modi on many issues, including Covid-19 management, the vaccination drive and vaccine diplomacy and how unlike some countries, who went in for increasing their debt and printing more currency to combat the Covid-related slowdown in their respective economies, India relied on “Atma Nirbhar Bharat” to boost its economy and to provide basic amenities, including food, to 80 crore poor and needy people through the “world’s biggest food programme” to “save their lives and livelihoods”. The BJP also attacked the Opposition parties for their “politics of opportunity” and “hateful mindsets” since the global pandemic had hit India to create propaganda against the Narendra Modi government’s efforts in Covid-19 management and vaccination.

The political resolution noted how through various initiatives like Mudra and Digital India, India’s youth was now a “job giver” and about how digitalisation had helped in bringing in transparency in all sectors. The resolution also mentioned how India’s foreign policy was centered on “Nation First” and how the Modi government rooted out “inner conflicts” and “non-alignment” — how India wants to become a big power and not a balancing power, and how India’s voice in global issues was now taken seriously. The resolution also mentioned how since the abrogation of Article 370, Jammu and Kashmir was facing less terrorism and more development.

The resolution was moved by UP chief minister Yogi Adityanath, and the central leadership’s move to allow him to move the resolution was seen by many as an elevation in the organisational hierarchy and a message to his detractors within the party. The UP CM addressed the national executive for nearly 20 minutes after moving the resolution.

Three Union ministers — Dharmendra Pradhan, Nirmala Sitharaman and Bhupendra Yadav — briefed the media about Mr Nadda’s inaugural speech, the political resolution and Mr Modi’s address respectively. The chief ministers and the BJP chiefs of UP, Uttarakhand, Goa and Manipur gave a presentations on the upcoming Assembly elections at the meeting.

Ahead of the polls in Punjab, the BJP also reached out to the Sikhs, with Mr Nadda listing a number of measures that the Modi government had taken for the community, including expediting action against the 1984 riots accused, facilitating foreign grants to gurdwaras and keeping the langars outside the purview of the Goods and Services Tax. Amidst a lot of speculation about a possible tie up between the BJP and former chief minister Amarinder Singh’s fledgling new party, the BJP said it would contest all the seats in the Punjab elections.

While it prepares itself for the coming electoral battles, the party also sent out a message to its cadre in West Bengal, where the party failed to defeat Mamata Banerjee and her Trinamul Congress earlier this year, and has complained of “political persecution” since the electoral debacle. Mr Nadda, as quoted by Mr Pradhan, said if one looks at its growth in the state from the political science perspective, there will be very few parallels of it in Indian political history. Alleging that 53 BJP workers were killed and many victimised by the TMC since the results were out, the BJP vowed to fight legal battles and support its workers in the state.

Setting new organisational targets for the BJP’s expansion, Mr Nadda said the party will constitute booth-level committees at all 10.40 lakh polling stations by December 25 this year and have “panna committees”, a reference to each page of the voters’ list, by April 6.

Citing the Taliban’s takeover of Afghanistan, Mr Pradhan said the BJP executive lauded the Prime Minister for his foresight in enacting the Citizenship (Amendment) Act, which aims at providing citizenship to the minorities in some neighbouring countries, including Pakistan and Afghanistan.