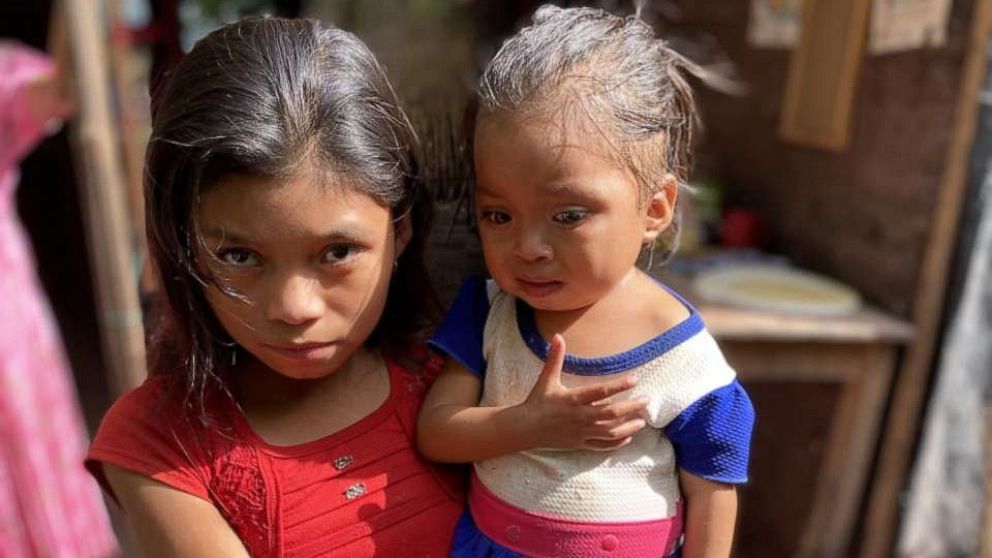 JOCOTAN, Guatemala — Little Anaeli was screaming. Fear, or maybe hunger pangs, were etched across her face. A few months shy of 4 years old, severe malnutrition made her look like she was maybe a year and half.

Anaeli was crying out as she was being weighed in a harness on a scale that looked like something you’d find in an old-fashioned grocery store.

Her mother, Jacinta, comes every two months to the village square in Jocotan, Guatemala, so that Anaeli’s growth can be tracked by medical teams from the government food assistance program, SESAN.

Anaeli was among the 75 or so infants and children being weighed and measured that day as part of an on-going fight against chronic malnutrition.

Welcome to the “Dry Corridor” of Central America.

The Dry Corridor cuts across Central America from Guatemala and Honduras, through Costa Rica and Panama. Severe drought conditions, or too much rain at the wrong time, are destroying crops.

Climate and agricultural experts point to roughly 20 to 50 years of changing El Nino and La Nina weather patterns. A change in the sub-tropical climate has wreaked havoc on a region that was once the fertile birthplace of the Mayan culture dating back millennia.

Many rural villages in Guatemala are experiencing catastrophic crop failure. In many areas, it’s been seven straight years of failed crops and decades of dwindling yields.

Cordon said she fears that the whole region will be inhospitable in just a few decades.

Almost one million Guatemalan children suffer from chronic malnutrition or stunting, according to the World Bank, and they never recover. These lifelong effects lead to 40% less brain development by age 3, and adults here are shorter than anywhere else in the Western Hemisphere.

When she took Anaeli to be weighed, Jacinta received a hefty potato sack full of rice, oats, black beans and cooking oil. It’s supposed to be enough food to last six weeks for a family of four. Jacinta has six kids under the age of 12, so she has to make it last for two months.

Jacinta lives in Amarillo Centro, a small, rural village with no running water and no toilets. She believes she’s around 29 years old, but isn’t certain.

Her rural village speaks mostly Chorti — one of the dozens of indigenous Mayan tribes that live and farm these picturesque hillsides. The Chorti are known for distinctive, colorful dresses. But Jacinta doesn’t speak Spanish, a requirement for attending school, so she has no education. She can’t read or write.

Mayan culture is a point of Guatemalan cultural pride. In this once fertile region, not much has changed in the lifestyle, but Mother Nature has turned cruel. Crops have failed so repeatedly that a decade ago the village turned to weaving hammocks out of plastic cording to try to make a living.

Jacinta showed me how she soaked the maize, or corn, and ground it in her stone pestle as her people have for generations.

“[My people] face hunger, of course, since there is not enough money to buy corn,” she said.

As we sat with Jacinta’s family, I noticed a brown liquid in Anaeli’s bottle. It was coffee. The mothers here know that caffeine and a little sugar will help with the hunger pangs.

At another town, with indigenous Chorti, we met Santos, a 16-year-old boy who tried to get to the United States for a chance at a better life, but he was sent back by Mexican authorities.

He said his parents are subsistence farmers who’ve toiled year after year in the fields, only to have their dreams dashed when their crops suffered.

Many in the U.S. see migrants on the U.S. border and assume they’re escaping violent gangs or political unrest. But what’s driving nearly 10% of Guatemalans to migrate is fleeing hunger.

In the past year, U.S. Customs and Border Protection had over 279,000 encounters with Guatemalans trying to cross into the country. The Biden administration is the first U.S. government to link migration to climate change, issuing the first report of its kind on the subject last month. But for now, it has not changed any policies, instead calling for an assessment of whether climate change could be legitimate grounds for refugee status.

In Santos’ case, his family said they paid a coyote the equivalent of $4,000 to get their eldest son into the U.S. and meet up with an uncle already in the country. Basically, they bet their entire life’s savings and borrowed even more on the gamble for Santos to travel thousands of miles north.

He told me his uncle sells oranges in Nueva York. Another uncle washes dishes in a restaurant there too. Santos showed me the tattered wisp of a piece of paper with his uncle’s name and phone number on it.

Armed with a third-grade education and $300 dollars, the teen set out on July 23, 2020, but was forced to return home after he was apprehended by Mexican authorities.

“They just caught me and sent me to a shelter for about 10 to 15 days,” he said. “After about 10 days they took me out and sent me back to Guatemala.”

Santos is determined to try again. He seemed unconcerned or perhaps unaware of the dangers of being an unaccompanied minor on the path through Honduras and Mexico’s gang-infested regions to the U.S. border.

“Were you scared?” I asked him.

“No,” he answers swiftly, his teenage manly bravado taking over. “Because I prayed for God to keep me safe.”

He said his dream is to make it to the U.S. so he can send money back to his family.

“For the poverty we are in here, we’re almost at rock bottom. And even worse, the harvest didn’t come out as we wanted to,” he said.

When I met his mother, she had a baby on her arm and five other children roaming the area around their mud-floor home. Its ceilings and walls were woven out of palm fronds. All eight of them sleep in one room, which is also where they cook from a fire pit.

Santos and his family know firsthand that money made in the U.S. can be life changing. One of his uncle’s wives, who lives next door, said her husband has been away for two years. He took their 10-year-old son with him, she said, and he’s been sending money back to her and their three daughters.

“He’s working hard for the good of his children here in Guatemala,” Maria said. “He says, the first thing is to build a house, a place where the children can live … so I did.”

When she showed me the construction, I was blown away. Mere feet from the palm frond hut was a four-bedroom, cinderblock and concrete dwelling under construction.

The “castle” as they’re known in these parts, is no doubt the envy of the village. In fact, the concrete fortunes of those who braved the trek to the U.S. are what inspires others to follow. The warnings of hardship and dangers along the way pale in comparison when 25% of the Guatemalan population is facing food insecurity and roughly half of the population lives below the poverty line.

But there are those who are trying to change that so that Guatemalan farmers have a chance at a future on the homefront, despite climate impacts. Circe Cordon is helping engineer drought-resistant strains of corn.

The situation is dire, Cordon said, and affecting everyone from children to the elderly, many of which are dying from starvation.