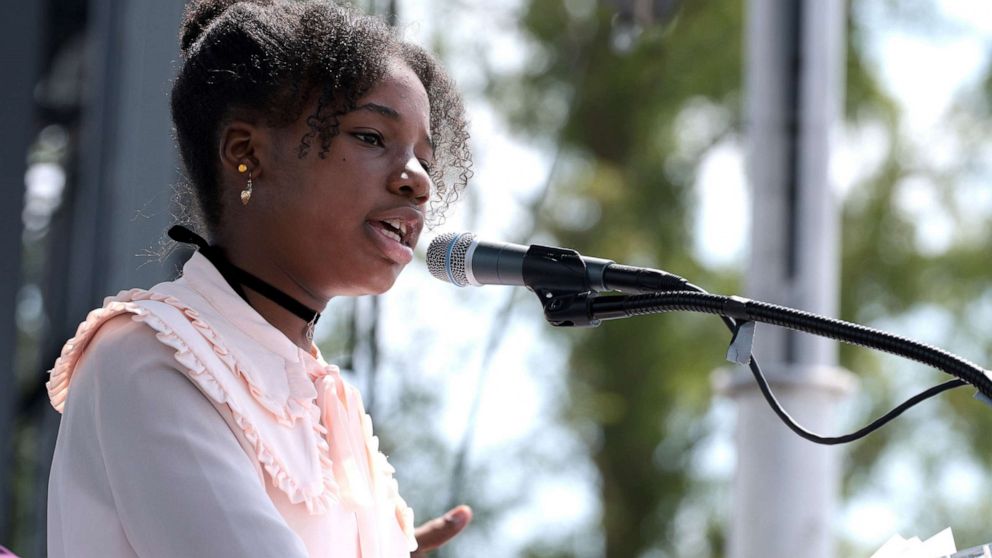 At first glance, Yolanda Renee King is your average teenage girl. She’s an eighth grader from Atlanta who participates in her middle school debate club and is waiting to hear whether she made the basketball team after trying out last week.

But as the sole granddaughter of Dr. Martin Luther King Jr. and Coretta Scott King, the 13-year-old not only juggles homework but also civil rights activism as she comes of age with a determination to uphold her family’s legacy.

“I do consider myself an activist,” King told ABC News. “Anyone who uses their platform for good, that’s what activism is all about.”

King was among the more than 50 protesters who were detained outside the White House for obstructing traffic during a voting rights demonstration on Nov. 3.

That same day, Republicans voted to block debate on the John Lewis Voting Rights Advancement Act. The bill is the third that Democrats have attempted to pass to provide a federal intervention against the restrictive voting measures that have passed in GOP-led states across the country.

The youth activist stood alongside her father, Martin Luther King III, and other protesters, who called on Congress to pass the Freedom to Vote Act and the John Lewis Voting Rights Advancement Act, as well as urge the Senate to change or alter the filibuster.

“We are planning to come back, especially after what we saw from Congress [on Wednesday],” King said. “They blocked these bills again and it’s really frustrating.”

Wednesday’s protest was King’s first act of civil disobedience, but it was not her first time speaking on the national stage. She was just 9 years old when she spoke at the March for Our Lives rally in March 2018. Since then, she has continued to advocate for gun safety, as well as voting rights, climate action, women’s rights and racial equality.

King told ABC News that although she has known about her family’s legacy for as long as she can remember, it was around the same year as her March for Our Lives speech that she really understood the weight of her grandparents’ contribution to civil rights in America.

“I would say it was around fourth grade when I really understood the significance of my grandparents’ work. That’s when it really clicked for me,” King said. “Many people don’t understand, my grandfather did not just make a change in the United States, but he really changed the world.”

“Even now, I’m learning stuff every day and I find myself asking questions when looking at some of their demonstrations and how they were beaten,” she added. “Would I have done that? Would I have been brave enough to do that because that takes a lot of courage? And so I think and say, ‘Wow, they had a lot of perseverance.'”

As King tries to find her voice as a civil rights activist, she told ABC News that while she feels empowered to follow her grandfather’s footsteps, she also wants to create her own path.

“I want to be an international human rights lawyer. … I can really help people and not just on a national level, but on a global level as well,” King said.

“What I hope to do is to make this world much better than it was when I first came.”